Saved Searches Advanced Search
Returned items may appear on your account for up to a week while they are quarantined. Please disregard any overdue notices about these items. Any fines accrued from this process will be waived.
Summary
s
shayshortt 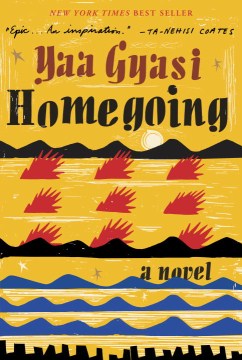 Effia and Esi are half-sisters who have never met. First divided by their mother’s secrets, they will soon be divided by an ocean when Esi is sold into slavery and shipped across the Atlantic. Effia remains in Ghana, sold in marriage by her step-mother to the British governor of the Cape Coast Castle, where slaves are held in cramped dungeons before being loaded onto ships bound for America. In present day America, Marjorie wrestles with her identity as a Ghanaian immigrant to the United States, while Marcus struggles to complete his PhD knowing that many young black men of his generation are dead or in jail, and that only chance has kept him from the same fate. In a sweeping family saga, Yaa Gyasi follows the sisters’ bloodlines over hundreds of years, one child from each generation, tracing the impact of colonialism and slavery across the centuries, between Ghana and America.