Saved Searches Advanced Search
Returned items may appear on your account for up to a week while they are quarantined. Please disregard any overdue notices about these items. Any fines accrued from this process will be waived.
Comment
FindingJane 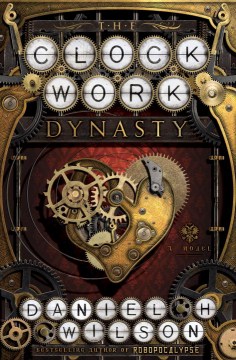 This novel electrifies with its fictional examination of human history and a hidden, shadow world of automatons (called “automat” in the book) that run alongside it. The book winds elements of steampunk, Biblical literature, mythology and fairy tales as Peter tries to answer his purpose (truth and justice) and learn who and what he is. He has been lied to, used, abused, attacked and attacking in turn. He is both master of his fate and slave to it.

Pyotr/Peter and the others are run by a Word, a sigil written on a crescent-shaped piece inside their bodies. Wound up in his perpetual struggle to understand his origins and his creators are a human woman called June and a fellow automat called Elena.

June is a heroine to treasure, blessed as she is with intelligence, learning, skills and curiosity. She eschews finery (it would get in the way of the time-consuming, dirty work she favors) and marches almost fearlessly through the world in quest of an answer to a mystery given to her by her deceased grandfather.

Elena is a complex figure. She is powered by Logic but she has learned to express human emotion. She too is driven to learn like June. But her automat nature and the fact that she is fashioned to look like a child limits her to hiding. Unlike Peter and June, a child cannot march alone through the world without attracting unwanted attention. So Elena’s abilities cause her to go into hiding, learning as much as she can from humanity and, in time, gifting knowledge to human girls.

Both Elena and June are such powerful female creations that their personalities nearly overwhelm the simpler Peter, who spends much time as a warrior and therefore is the more action driven of the trio. Yet the three become wound inextricably in this intricate narrative of pseudo-history, science fiction, art, industry and the fire of war.

This is a grand saga, knotty, riveting (pun intended) and a fantastic whirligig ride of a story. It is so much more than the sum of its parts—much like the automat and humans within it.