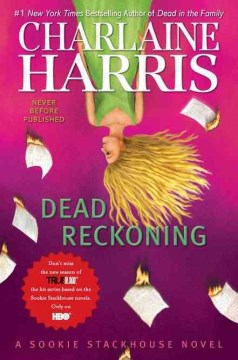 Someone has firebombed Merlotte's; some drugged out thugs are sent to snatch Sookie; and that's just the beginning! Sookie has to figure out who is targeting her, while helping Eric come up with a plan to get out from under Victor.

Emotions are running high. There's a schism between Eric and Pam, and Sookie knows she has something to do with it. (The basis of their discord, when it's finally revealed, is real kick to the gut!) At the same time, Pam is trying to gain permission to create her first vampire child. And there are major developments in the blood-bond issue between Eric and Sookie.

Sookie is coming to see how much she has changed since the supes have come into her life. Much of what she's done has been necessary to her own survival, but she's not sure she likes who she's become. Things are strained between her and Eric. I've been Team-Eric for as long as I can remember, but the cracks are forming. That's an understatement, really. We see what can easily be the mechanism to separate them once and for all. But things are left unresolved. I just wish Harris would just rip the band-aid off already. I've softened towards Bill, though I can't see the two of them ever reconciling --and we even have a surprise appearance from another potential suitor. But when all is said and done, I feel like we're just getting more groundwork laid for Sam as an eventual HEA. Sure, he's got a girlfriend here, but he is now firmly ensconced as Sookie's best friend. I feel like it's just a hop, skip and jump from becoming something more.