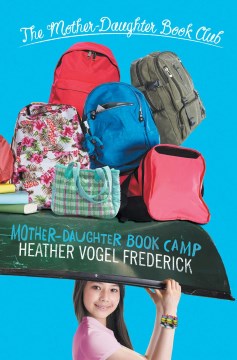 i think that this was a really good book because it explains like how you can help someone get better of not worrying about homesickness. i really liked this book, and i am really sad that this series is over. i think that it would be really hard for emma to loose someone like stewart because now, he has a "New, shiny girlfriend." i cant believe how much they changed over the years of the book club. like jess for example, she is way less shy now. becca, shes not as mean as she used to be. emma, she improved a lot and stuck up for herself. megan, flashlite.
i really dont want the series to be over especially since now theyre going to college....

Kinda Spoilers! Mother-daughter book camp definitely wasn't my favourite book in the series but, I still enjoyed reading it. When the girls started being nicer to Felicia I was happy but then they tried to change her. I felt like that was something the girls should know a lot about especially Emma and Jess and even Meghan because Jess and Emma were bullied and Ms. Wong tried to change Meghan's love for fashion but, her love for fashion is what makes Meghan who she is. Just like how Felicia's quirky medieval fashion and instruments make Felicia who she is. So that kinda disappointed me because after all the girls have been through, they should know better. Overall Mother-daughter book camp was okay but it was definitely not the best in the series.

I think that this was my least favorite book in the series, but it was sweet to see the relationship between the campers and counselors. I don’t understand why everybody now hates Emma. Sure, she misses Stewart, but they’ve been together for years, you can’t really blame her. If you haven’t read the others in the series, I would definitely recommend doing so. Over all, it was a good book, and wrapped up the series nicely.

Not my favorite but still pretty good. I liked Wish You Were Eyre better

Hurray! I have finally completed the Mother-Daughter Book Club series. This was the last book that I had to read. It was hilarious, and tragic too. I really hated the part where the author mentioned that Emma and Stewart are no longer together because Stewart found a new girlfriend. This book was one of the best because it was talking about all the young campers overcoming their homesickness, and having courage to do things. One part that I really liked was when the five book club friends were getting revenge on the Pinewood boys, for stealing their bell. The girls stole the boy's toilets, and the head counselor was even into this plan. It was really fun because the boys came back with the bell and pleaded for mercy. Camp Lovejoy was truly a great bonding experience for both the counselors and the campers. I would definitely recommend all to read this book, and have fun with the characters along the way.

For me personally, this book was my least favorite (the worst, basically) of the whole Mother-Daughter Book Club series. It was kind of disappointing. And I agree with the third-to-last comment about Emma.

Right. So I read this. Yay me. I finished the series. Awesome.

Aaaaaaaaaaactually... No. Not really that awesome. I mean, it's been really nice to have a nice little tie-up for the story. Conclusion and everything. But I gotta say this:

I. Officially. Cannot. Stand. Emma. Hawthorn.
Honestly. In the first few books she was my favorite, the one I could most relate to. Now she's a crybaby with parents that are way nicer and friends that respect her way more than they should. Every human should be respected, but Emma just can't be. There is nothing to respect in her, except maybe the fact that she reads a lot. That's cool. Otherwise she's a sob spoiled brat who is desperate for her boyfriend who is simply too smart to bother with her. Seriously. She nauseates me. She reminds me of a Harry Potter scene (HP and the Deathly Hallows) :

"It is time you learned some respect!" -Rufus Scrimgeour
"It's time you earned it." -Harry Potter.

I feel like Harry would give Emma such a good talking-to. I wish he had. Oh well.

So that's Emma, who went from my favorite to my worst.

Then there is Becca.
She used to be my worst character. Duh. She's mean. She bullies. But by this book, she is mature and understanding and responsible. She's slightly boring in that she is very very perfect, but she's NICE. And can stand up for herself. She doesn't need a boyfriend to keep herself sane.

So that's Becca, who goes from my worst to my favorite.

And then Megan:
So Megan is just bleh. That's the only word I can think of to describe her. Her life is so perfect. Perfect guy, perfect friends, perfect parents, perfect personality, perfect talent, perfect job. Ich. Ich ich ich ich. As I said before: bleh.

So that's Megan, who went from cool to bleh.

Then Jess.
OK, so for me Jess hasn't changed that much. For the entire series she's remained sometime in the middle. Never my favorite, but definitely never my worst. She stands up for her friends, she's talented, she's kind. And it's fun to see her with Darcy. Fluff is so much fun. But she's still annoying. There isn't really anything specific. She just is.

So that's Jess, who went from eh to eh.

And then Cassidy.
So Cassidy also transformed a lot throughout the series. She goes from fun but obnoxious and tomboyish to fun but obnoxious but understanding and tomboyish to fun, less obnoxious, understanding, and still pretty tomboyish but with a boyfriend. But then this is where she stops getting better and starts getting worse, cuz the git doesn't understand that Tristan is good for her and Zack causes girls to have Zack Attacks and so is someone who makes me want to throw up. And she just in general stops getting better. In the beginning she's constantly improving, then all of a sudden there is a standstill and she's doing nothing.

So that's a pretty comprehensive character analysis, I think.

Read the book at your own risk.

GennyHebda thinks this title is suitable for 12 years and over

violet_cat_4179 thinks this title is suitable for 9 years and over