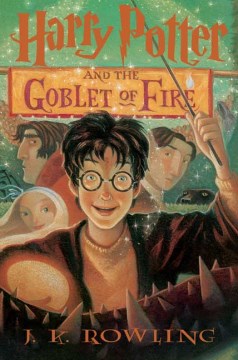 Harry Potter and the Goblet of Fire

Harry Potter, a fourth-year student at Hogwarts School of Witchcraft and Wizardry, longs to escape his hateful relatives, the Dursleys, and live as a normal fourteen-year-old wizard, but what Harry does not yet realize is that he is not a normal wizard, and in his case, different can be deadly.
Publisher: New York : Arthur A. Levine Books, 2000
Edition: 1st American ed
ISBN: 9780439139595
0439139597
9780439139601

Recommended by Adelaide--July, 2020 (Book That Takes Place In Another Country)

List - A Hugo Award winner or nominee, as part of the Extreme Reader Challenge

Some content below may have been reported by users for containing spoilers or offensive content. Learn More

This book is a defiant car trip book, or great for any other time when you want to be swept away to to the Wizarding World!

I loooooovvvved it!!!! It’s one of my favorites I love the romance part I really wished that Harry went with cho tho the ball and that the kissed love the whole series and the movies I would completely recommend this series who’s going for adventure and some romance!!!!!

This is one of my favorite Harry Potter books!!!!!

The setting at the beginning of the story is 50 years before the present day with the Riddle family being mysteriously murdered. Their groundsman, Frank Bryce, was declared innocent of the murder, and one day when walking into the abandoned house, he sees Voldemort and Wormtail plotting to kill Harry Potter. I like this book because the Harry Potter series is always fun and inviting with magic and the story is interesting from start to finish.

this is the best book ever

This book is awesome! same with the rest of the series. I like to read this book when i'm bored because there is always something to look forward to like the first second or third task.

Totally recommend this book. Some of the chapters end on cliffhangers, so it always pulls me back in so that I can figure out what happens in the next chapter! The Harry Potter series is a MUST READ!!!!!!

alexqise thinks this title is suitable for 10 years and over

black_eagle_873 thinks this title is suitable for All Ages

sophiaSHkim thinks this title is suitable for 10 years and over

vaasu thinks this title is suitable for 10 years and over

VictoriaWANG2007 thinks this title is suitable for 1 years and over

olive_owl_252 thinks this title is suitable for 11 years and over

"Cedric was lying spread-eagled on the ground beside him. He was dead."

"Anyone can speak troll. All you have to do is point and grunt." - Fred

"I was saying that Saturn was surely in a position of power in the heavens at the moment of your birth... your dark hair... your mean stature... tragic loses so young in life... I think I am right in saying, my dear, that you were born in mid-winter?"
"No," said Harry. "I was born in July."

"Enchantingly nasty. I particularly enjoyed your description of me as and obsolete dingbat." - Dumbledore

"What is ze meaning of zis, Dumbly-dorr?" - Madame Maxine

"I thought it sounded a bit like Percy singing... maybe you've got to attack him while he's in the shower, Harry." - George

"Saturn, dear, the planet Saturn!" said Professer Trelawney, sounding definitly irritated that he wasn't riveted by this news. "I was saying that Saturn was surely in a position of power in the heavens at the moment of your birth... your dark hair... your mean stature... tragic loses so young in life... I think I am right in saying, my dear, that you were born in mid-winter?"
"No," said Harry. "I was born in July." - Harry Potter and the Goblet of Fire

'"Vell, ve fought bravely," said a gloomy voice behind Harry. He looked around; it was the Bulgarian Minister for Magic.
"You can speak English!" said Fudge, sounding vey outraged. "And you've been letting me mime things all day!"
"Vell it was very funny," said the Bulgarian Minister, shrugging."" - Harry Potter and the Goblet of Fire

"No, thank you, Ludo," said Crouch, and there was a bite of impatience in his voice. "I've been looking for you everywhere. The Bulgarians are insisting that we add another twelve seats to the Top Box."
"Oh, is that what they're after?"said Bagman. "I thought the chap was asking to borrow a pair of tweezers. Bit of a strong accent." - Harry Potter and the Goblet of Fire

An extraordinary creative achievement by two extraordinary talents, Jim Kay's inspired reimagining of J.K. Rowling's classic series has captured a devoted following worldwide. This stunning new fully illustrated edition of Harry Potter and the Goblet of Fire brings more breathtaking scenes and unforgettable characters to life - including Cedric Diggory, Fleur Delacour and Mad-Eye Moody. With paint, pencil and pixels, Kay conjures the wizarding world as we have never seen it before. Fizzing with magic and brimming with humour, this full-colour edition will captivate fans and new readers alike as Harry, now in his fourth year at Hogwarts School of Witchcraft and Wizardry, finds himself competing in the legendary Triwizard Tournament and facing death-defying tasks, dragons and Dark wizards ...

Harry Potter escapes another year with the Dursleys and spends it at Hogwarts. He quickly discovers that there is a tournament, the Triwizard Tournament, at school. Three schools will come to Hogwarts to participate in the tournament, and each school will get one champion. In order to enter, a student must pass the Age Line to put a piece of parchment with his or her name and put it into the Goblet of Fire. Poor Harry does not put his name in, but is picked for the tournament anyway. He is forced to compete and goes against Victor Krum, from Drumstrang, Fluer Decleur, from Beauxbatons, and Cedric Diggory, from Harry's very own Hogwarts. All the participates Harry were going against were in their 7th year, so they all had 3 more years of magical education then Harry had. There were 3 tasks that had to be completed that were described as "three extremely dangerous tasks." Harry has been known for enduring so much, but will he able this? Read Harry Potter and the Goblet of Fire to find out!

The book opens up with the spying on Voldemort by muggle Frank Bryce. He manages to hear as far that Voldemort's deepest desire was to murder a boy named Harry Potter, whoever he was, and he had killed in the past with no remorse-before he was discovered and killed himself. The boy who was also spying, though unconsciously, and in his sleep, the very person who was target of Voldemort's murderous desires, was not discovered.

Harry became incredibly worried at this vision and that his lightning scar, mark of the first, but certainly far from last, attempt at slaughtering him by Voldemort. Was Voldemort growing stronger, as all signs seemed to indicate? Harry didn't dwell on it for about two days (spent by the Weasleys and watching the Quidditch World Cup). But at the end of that he was seriously alarmed and alert, because Voldemort's sign, the Dark Mark, had appeared again after thirteen years, after a riot which was heavily suspected of being made by the remainder of the Death Eaters (Voldemort's supporters). His fears weren't baseless either, as somebody had put his name into the Goblet of Fire against his will, and Alastor "Mad-Eye" Moody, dulusional ex-Auror thought someone had done it to get him killed in the process.

A young wizard who has many cool and action-filled adventures:Harry Potter.

The Goblet of Fire is a great book and movie, but still not my favourite!

This book is great ! The best harry potter book I would say !

Somebody has placed Harry Potter's name in the Goblet of Fire. As an underage wizard to play in the Triwizard Tournament, he is chosen as a champion and must participate in it. These stages may mean death and somebody wants Potter dead - and that person is within Hogwarts. This mystery and light romance book is the start of Voldemort's return. Find out more by digging yourself into the entire Harry Potter series!

Harry Potter starts his fourth year at Hogwarts with a shocking turn of events - Hogwarts is hosting the Triwizard tournament, where three witches and/or wizards compete in an epic battle to claim the Triwizard cup. When Harry unexpectedly becomes the fourth champion of this competition, he is shocked. Who put Harry's name in the Goblet of Fire, the cup in which Dumbledore (the headmaster) draws the names of the contestants who compete from the three schools (Hogwarts, Beauxbatons, Durmstrang) ? And why does his scar throb so painfully? Mysteries await in this fourth installment to the Harry Potter series, mysteries that end in something unspeakable.

4th masterpiece in the Harry Potter series, written by J.K.Rowling. It features Harry in his 4th year at Hogwarts and his unexpected entry in to the Triwizard Tournament, which ultimately causes the rise(resurrection) of evil(the Dark Lord)

Harry Potter as he wakes in the night with a throbbing pain in his scar. The next morning, Harry's Uncle Vernon receives a letter from the Weasleys asking Harry to join them at the Quidditch World Cup, and reluctantly agrees to let Harry go. Harry is brought to The Burrow the next day. Early the next morning, the Weasleys, Harry and Hermione head off to the Quidditch World Cup. They travel by Portkey, an object which wizards use to travel quickly to another linked destination. While traveling, they meet Cedric Diggory, another Hogwarts student. At their seat, Harry, Ron, and Hermione meet Winky, a house-elf who says she is saving a seat for her master, Bartemius 'Barty' Crouch. That night, after the game, a crowd of Death Eaters (followers of Voldemort) destroy the campground and torture its Muggle owners. Harry, Hermione and Ron escape by fleeing into the woods, where Harry discovers that his wand is missing. Moments later, someone fires Voldemort's symbol, the Dark Mark, using Harry's wand. Winky is found holding Harry's wand at the scene of the crime; Mr Crouch fires her as punishment for associating his name with the Dark Mark. Later at the Burrow, Cedric's father brings news that a man named Mad-Eye Moody attacked an intruder at his house, forcing Arthur to sort it out.
Upon arriving at Hogwarts, Professor Dumbledore announces that the Triwizard Tournament will take place at Hogwarts throughout the school year. The Tournament is a competition between three delegates, or "champions", one from each of the three great European schools of magic - Hogwarts, Beauxbatons, and Durmstrang. These champions compete in three tasks and they are given scores by the judges based on their performance