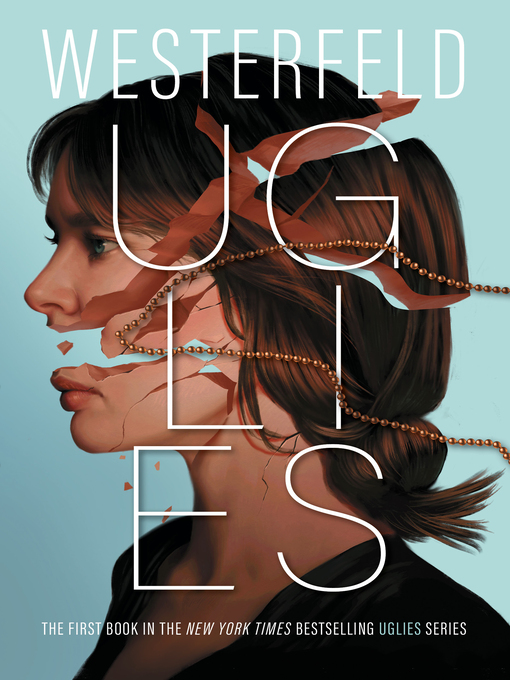 The first installment of Scott Westerfeld's New York Times bestselling and award-winning Uglies series—a global phenomenon that started the dystopian trend.
Tally is about to turn sixteen, and she can't wait. In just a few weeks she'll have the operation that will turn her from a repellent ugly into a stunningly attractive pretty. And as a pretty, she'll be catapulted into a high-tech paradise where her only job is to have fun.

But Tally's new friend Shay isn't sure she wants to become a pretty. When Shay runs away, Tally learns about a whole new side of the pretty world—and it isn't very pretty. The authorities offer Tally a choice: find her friend and turn her in, or never turn pretty at all. Tally's choice will change her world forever.
Publisher: Simon & Schuster Books for Young Readers

-Uglies is the first book in a four-book series, I really enjoyed the concept of this story. It takes place in the future and the author: Scott Westerfeld's idea of the future is incredible. The book follows Tally as she makes new friends and learns the truth about her world, but now that she knows these things she is in danger and needs to escape. I never wanted to put the book down, the characters are so relatable and unique. This book is great for sci-fi, futuristic, and adventure genre lovers. I recommend this for ages 12+. This is a great series and I definitely recommend it. 4.5/5 @goodies06 of the Hamilton Public Library's Teen Review Board

Very interesting and expressive, Uglies and the uglies series were all very interesting,each one bringing something new to the series. If you enjoyed this book I suggest the book Unwind by Neal Schusterman. Could be startling and contains some disturbing operations on human, other than that a good book

I loved Uglies. I was struggling to find a good book recently that I would stay hooked to and Uglies did just that. I wanted to read it all the time. I wish that her journey to the Smoke was a bit more interesting though.

When can I get this book ?

I would rate Uglies by Scott Westerfeld 3.5/5 stars. I really enjoyed the storyline, I just didn’t like how it was written in third person. The book was very good, and would definitely be given a higher rating if it was written in first person. I loved how it took place in a futuristic dystopian world. I liked how the book showed that to be pretty is not an accomplishment, and you can be pretty without all of the stereotypes modern beauty has today. I love how Tally threw away her whole life she knew to help the people she just met, because she knew that those people would always be better to her than the people she knew. I enjoyed how the stereotypes we enforce today were shown through a secret part of the surgery given when turned pretty. It reminded me of when the misfit joins the popular group, and changes themselves to fit in with what society wants them to be. It showed that being pretty isn’t necessarily what is shown on the outside, but to be pretty, you must have a beautiful heart and a sharp mind. I just wish the book would be written in first person because I find it very hard to be interested in books that are written through third person because we do not get that connectivity we get with the main character when it is written in first person. I would recommend this book for fans of Twilight or Divergent.
@Dolphin05 of the Teen Review Board at the Hamilton Public Library

Second time I tried this one. The first, I couldn't get past the concept of uglies and pretties; the second, it was a very quick read and I wanted to immediately reserve the next 3 in the series. Unfortunately in times of COVID when the libraries won't allow holds, that may mean a very long time before I get to finish the series... Can't wait!

I have loved this book for a very long time and you can very well see our culture going this way! A great read for anyone!

A book unlike any I have ever read before, Uglies tackles some very important topics semi-subtly while keeping the reader’s attention in a well-developed science-fiction dystopian world. Tally, the main character, is about to turn sixteen, when she will get a surgery turning her from an Ugly into a New Pretty. When a new friend, Shay, comes into Tally’s life and tells her about how she may not want to have the surgery, Tally’s life spirals out of control. She soon learns that the Pretty existence isn’t exactly what it seems, and she must make some very important decisions about her future. I enjoyed the plot of this book and some of the moral struggles of the different characters, along with the periodic suspense. There were, however, times where I found myself disinterested in the current happenings of the book, causing me to skim until the book regained its fast pace. Despite this, I highly recommend this book to anyone ages 11+ that enjoys science fiction, a reading that provokes deeper thought, and an overall fast-paced plot.

this book was really good, it took a little bit long to get in to, but than it got super good and I couldn't stop reading it.

I really understand that in this time and age we are more focused on how we look and dress and act. We might see everything as one big UGLY mess and that we try to find a place to fit in (new pretty town) to make are selves feel good and that we are worth something . We might be PRETTY or we might be UGLY it is just how we look on life itself and on other people .

I liked how SCOTT WESTERFELD put Tally in a situation that she had to make a choice of doing what is right in order to get what she really wants in life or hurting people by doing wrong .
It has a great plot line and I was really into it and I was even calling my friends at youth group the suffixes . Thank you SCOTT WESTERFELD

Alexis_W thinks this title is suitable for 11 years and over

Kaelynmcintyre thinks this title is suitable for 11 years and over

violet_cat_5388 thinks this title is suitable for 11 years and over

black_pony_62 thinks this title is suitable for 12 years and over

NeverEndingCycle thinks this title is suitable for 12 years and over

red_dolphin_449 thinks this title is suitable for 11 years and over

In a world of extreme beauty, everyone normal is ugly.

-Cover of the book

"Making ourselves feel ugly is not fun."
-Shay

"The early morning sky was the color of cat vomit." - Uglies by Scott Westerfeld

"It's not culture, it's evolution!"

"That's the worst thing they do to you, to any of you. Whatever those brain lesions are all about, the worst damage is done before they even pick up the knife: You're all brainwashed into believing you're ugly."

"Making ourselves feel ugly is not fun."

"You're all brainwashed into believing your ugly."

The first in a fascinating series set in a future where EVERYONE undergoes extreme body modification surgery to become "pretty" at age 16. But that is not all that is modified. Come along on this amazing journey with a group of young people who seek the truth about the becoming "pretty". Part two: Pretties, Part three: Specials. All highly recommended, swift and fun reads. -

Tally Youngblood lived as un ugly and dreamed about being an pretty. At this distinctive town people were born "Ugly" and when they turn sixteen they endure a surgery to make them pretty. As Tally knew more about the town and the outside world, her knowledge deepen and the desire of becoming a pretty declined.

In a future society, where mankind has had to rebuild, teens live in the bland residential zone of the Uglies - until they turn sixteen and undergo a surgery perfecting their physical features and enabling them to live happily in the world of Pretties. Tally Youngblood, who is about to turn sixteen, is ecstatic to get this perfect life until she meets Shay, a girl of similar age. They get along well except for the fact that Shay doesn't seem to want to have the surgery done to her and tells Tally how they can escape. Tally wants to forget about her: However, when she disappears, Special Circumstances wants to find her, and they plan to use Tally by threatening that she won't get the operation unless she does what they want.

Tally has been waiting all her life for the operation that will make her pretty: gorgeous features, perfect body shape, big beautiful eyes, so that she can look like all of the other sixteen-year-olds and join them in their eternal pretty party across the river. Right now she feels ugly and petulant, and has nothing better to do than sneak out and break the rules by trying to find her best friend, who already turned pretty and lives in that other glittering world she is waiting to join.

Then she meets someone else, someone who isn't sure that turning pretty is all it's cracked up to be. Pretty soon our heroine is entangled in intrigues, underground resistances, espionage, betrayal, and even gets to fall for someone along the way.

Tally is an ugly. She wants to be Pretty. After her best friend runs away from a surgery that every 16 year old undergoes to become "perfect", Tally is blackmailed by Special Circumstances to find her friend and the town of runaways- or stay ugly forever. Tally lives in a world where everyone receives plastic surgery to look beautiful and almost identical. She makes friends with someone who introduces her to the possibility of life beyond the shallow world of parties she has been looking forward to after her mandatory plastic surgery that she will have on her sixteenth birthday. She turns down the offer, not understanding how anyone would want to stay “ugly” but is blackmailed into going along as a spy for the Specials who enforce the falsely beautified and ditzified life of the city. Her plans to expose the rebels dissolve as she finds that individuality and aging aren’t so horrible after all

tally is going to get a operation to turn her pretty (perfect) which is the norm. she becomes friend with a girl who runs away from the city/operation. tally cant get the operation till she brings shay home to the city against her wishes. so to become normal/pretty/what shes always wanted, she has to betray her friend and the smoke, a group that lives on the outside which full of those who want to don't become pretty.

All Tally wants is to be a pretty, but is it really all its cracked up to be?