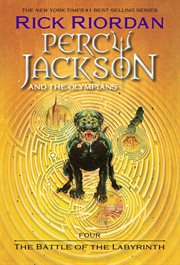 The Battle of the Labyrinth

Percy Jackson isn't expecting freshman orientation to be any fun. But when a mysterious mortal acquaintance appears on campus, followed by demon cheerleaders, things quickly move from bad to diabolical. In this latest installment of the blockbuster series, time is running out as war between the Olympians and the evil Titan lord Kronos draws near.
Publisher: [United States] : Disney Book Group, 2009
ISBN: 9781423131984
1423131983

It was the summer before Percy’s freshman year in high school. At Camp Half-Blood, Percy receives a message that Nico Di Angelo(son of Hades) wants to bring back his dead sister, Bianca Di Angelo. The next day, Annabeth and Percy discover the entrance to the Labyrinth, a vast, magical, and dangerous maze. Annabeth realizes that Luke Castellan might use it to attack the camp. Percy, Annabeth, Grover, and Tyson lead a quest through the Labyrinth to find the creator of the maze, Daedalus. After coming across many difficult adventures and trying to get through the maze. They realize that only a normal, mortal girl named Rachel can lead them through the maze. With the help of Rachel, they reach Daedelus only to be attacked by monsters. Later they all reach a place which Percy recognizes as the Titans palace, there he discovers that Kronos fused with Luke. They manage to escape from him. In the end, the camp was saved when Daedelus gave up his life because it was the only way to destroy the maze.
I loved the concept of the Labyrinth in this book, it added a lot of adventure and introduced new mythological monsters to the story. I also found the introduction of new half-bloods interesting, the reader got to know the character and personality of Nico very well. What I disliked about this book is the introduction of Rachel, in my opinion it would have been better if the plot didn’t involve people from the outside, real world.

The fourth book in the Percy Jackson series is no less riveting than the others. Set in a world where Greek mythology interacts with modern society, Percy Jackson, son of Poseidon, and his friends must once again work together to fulfill a quest given to them. You will read about how each of the characters grows and develops as individuals, while also strengthening as a group. The plot surrounds one of the antagonists, Luke Castellan, son of Hermes, who has sided with the evil and powerful force, Kronos, Titan of Time. The two plan on using the Labyrinth, an elaborate and confusing structure created by the ancient architect Daedalus, to invade Camp Half-Blood, a sanctuary for demigods. And thus, the race against time begins. Along with the regular group of Percy and his friends, Annabeth, Grover, and Tyson, many other characters appear, like Nico di Angelo, Hephaestus, Calypso, and Daedalus himself.

This book was very enjoyable to read because Rick Riordan includes many adventures and new character interactions within it. The book series itself also paints a picture of how Greek mythology would integrate with the present-day.

I would definitely recommend this book, especially to those who have read Riordan’s work before and to those interested in mythology. 5 stars!

An entrance to the mythical Labyrinth is found inside Camp Half Blood’s borders, which leaves an opening for Luke’s forces to attack-If he can navigate it. The Labyrinth is infamous for its madness inducing traps, and reality bending tricks, causing people to get lost easily. However, it can be navigated with Ariadne’s string, due to her being the daughter of king Minos, who ordered Daedalus to build the Labyrinth. Using this while in the Labyrinth can allow anyone to travel great distances in a few short minutes, which is problematic when a monster army is involved. To convince the creator of the Labyrinth, Daedalus, not to give Ariadne's string to Luke, a quest must be sent out into the Labyrinth. The four chosen to go are Annabeth, Grover, Tyson, and Percy.

Prepares for the rise of a major adversary with a large grudge against the gods without losing the splash of humor that is in all Rick Riordan books. What does Luke have to do with all of this, and why? Great set up for the final book of the series.

SPOILER FREE- This was amazing, it was soooooo gooooooood. It is jam packed with action and adventure, mythology, a great plot twist , and the Labyrinth is a great place for the book. That leads to my only complaint, it has so much stuff you can't remember everything and so much is happening, that's why it is not my favorite in the series. I like how Annabeth leads the quest and it is amazing. THIS BOOK IS AMAZING!!!!

So good. You should totally read it!

Not exactly thrilled about being 14th in line on one copy...

i cant even read it!!!!!!!!!!!! weird website dudes this suckssssssssss

Shreeya_Amin thinks this title is suitable for 10 years and over

areeba_3 thinks this title is suitable for 11 years and over

Ivan0 thinks this title is suitable for 12 years and over

violet_dog_6820 thinks this title is suitable for 11 years and over

sarahbru17 thinks this title is suitable for 8 years and over

anihacc thinks this title is suitable for 10 years and over

RobertELPL thinks this title is suitable for 14 years and over

“You are okay?" he asked. "Not eaten by monsters?"
"Not even a little bit." I showed him that I still had both arms and both legs, and Tyson clapped happily.
"Yay!" he said. "Now we can eat peanut butter sandwiches and ride fish ponies! We can fight monsters and see Annabeth and make things go BOOM!"
I hoped he didn't mean all at the same time, but I told him absolutely, we'd have a lot of fun this summer.”

"Plant a garden in Manhattan for me, will you?"

But remember, boy, that a kind act can sometimes be as powerful as a sword.

“Monkey bar," Annabeth said. "I'm great at these." She leaped onto to the first rung and start swinging her way across. She was scared of tiny spiders, but not of plummeting to her death from a set of monkey bars. Go figure.”

“Getting something and having the wits to use it...those are two different things.”

“New lesson, class. Most monsters will vaporize when sliced with a celestial bronze sword. This change is perfectly normal, and will happen to you right now if you don't BACK OFF!" - Percy”

“Rachel: You're a half-blood, too?
Annabeth: Shhh! Just announce it to the world, how about?
Rachel: Okay. Hey, everybody! These two aren't human! They're half Greek god!...They don't seem to care.”

“Jumping out a window five hundred feet above ground is not usually my idea of fun. Especially when I'm wearing bronze wings and flapping my arms like a duck.”

“People are more difficult to work with than machines. And when you break a person, he can't be fixed.”

Percy, annabeth, Grover, Tyson have to find deadalus who created the labyrinth so they can find a way to close it up

in this book percy goes on a quest with annabeth leading it. they go in to the labyrinth and try to go to daedalus work shop and convince daedalus to stop luke from invading their camp.

For Eva, a young girl with a lively imagintation, a seemingly ordinary box becomes a portal to a magical, wonder-filled world. Eva wishes for a pet. She reaches into her magic box and pulls out Monty. But he's not quite what she had in mind. (He's a polar bear.) What else might be in the magic box? A colony of festive rabbits, some delicious food, and a band of the very best musicians (including a sax-playing leopard)! The party is officially on! Once everyone has danced their socks off, Eva clicks her fingers to make everything vanish. Well, not quite everything... Katie Cleminson's lively and fanciful illustrations are the perfect vehicle to convey the transformative power of a young child's imagination.

After being attacked by empousai cheerleaders at his new school, Percy returns to Camp Half-Blood and learns about the Labyrinth; part of the palace of King Minos in Crete that was designed by Daedalus. He also meets the camp's new sword master, Quintus. During a battle drill with giant scorpions at the camp, Annabeth and Percy accidentally find an entrance into the Labyrinth. Percy soon learns that Luke had used this entrance before and will try and lead his army through the Labyrinth straight into the heart of Camp Half-Blood.[3]

As the Great Prophecy comes closer and closer, Percy goes out for one more quest where he unlocks the feelings of Annabeth.

In this fantastic book, percy and his team must go through the maze of the labyrinth to find its owner. The Labyrinth is a magical maze in which it will lead you throught a tunnel to your destanition.They will need to find a genius named Daedalus. But they learn that they are not the only ones in serch of Daedalus! They fid out that Luke also needs to find him to nagavite through the maze. Luke is leading an army through this magical maze to Camp Half Blood. Luke wants to convince Daedalus to help him through the maze. At the very end of the book, Percy tried to stop the evil titan loard from raising, but he fails...There is only one more year remaining from Percy's Great decision...

Annabeth Chase, Percy Jackson, Grover Underwood, and Tyson goes on a quest through the Labyrinth (made by Daedalus) to convince Daedalus to fight with them. Also, to stop Luke from finding a way to navigate the Labyrinth (by using Ariadne's string) and mounting an attack on Camp Half-Blood.

Percy Jackson is not expecting orientation to be fun or exciting, but neither is he a monster attack! Now Percy, Annabeth Chase, Grover Underwood, and Tyson must enter the dangerous Labyrinth in order to save Camp Half-Blood from Kronos, the other Titans, Luke, and the other demigods who joined them in this fourth installment to the bestselling Percy Jackson and the Olympians series.

Violence: There is a little bit of violence when they fight krono's army from the labyrinth.

Other: The action in this book may cause you to pass out.