Saved Searches Advanced Search
All Tacoma Public Library branches will be closed on Saturday, January 16th in observation of Martin Luther King Jr. Day. Plan your visit with this list of all holiday closures.
Returned items may appear on your account for up to a week while they are quarantined. Please disregard any overdue notices about these items. Any fines accrued from this process will be waived.
Print 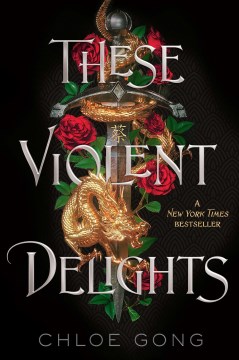 Roma Montagov and Juliette Cai are the heirs to rival gangs, the White Flowers and the Scarlets. Juliette is cunning, willing to go to any lengths to protect her beloved Shanghai and her family, while Roma seeks mainly to avoid his father's vicious temper. When a monster is sighted and a mysterious plague begins to sweep through the city, both are separately tasked with looking into it, and the violence and death brings them together again, their fraught history be damned.

I just...I almost have no words. Except I have many, many words at the same time. This was gorgeously written, brilliantly plotted, and immersive as all hell. I never wanted to put it down.

One of my favourite things is a retelling done right. Where you can see those hints of the original story peeking through, but they don't overwhelm the new story being told, and the originality of that new story shines through stronger than if it were a new idea on its own. That's exactly what we get here. The rival gangs in Shanghai brings the story of Romeo and Juliet to a completely new world, and it was so much fun picking out the pieces of Shakespeare among the viciousness of this new setting.

Roma and Juliette are so wonderful as well. Juliette is a cutthroat queen, ready to do anything to maintain her status in the gang and in the city, but she's also so heart-driven, and I never discounted her grit at any point in the story. Roma is somewhat more tragic and mysterious, but the way he cares for his family and, ultimately, for Juliette was so intense. Their back-and-forth dance, the way they tiptoe around each other yet also barrel head-first towards one another, was just so intriguing and engrossing.

And the cast of characters at large. Oh my god. I can't get over how much I cared about Marshall and Benedikt, Kathleen and Rosalind. I got major Raven Boys/Ronan Lynch vibes from Marshall, and I just enjoyed their sections SO much. I can't wait to rejoin them in the sequel, almost as much as I can't wait for more Roma and Juliette.

The way Chloe Gong weaves her own voice/immigrant experience into the narrative is also masterful. Juliette belongs to two worlds, having grown up in both American and China, and the way that she feels out of place yet not is so well-written. I empathized with her so much.

The world-building, also, is just absolutely stunning. I felt like I could smell the garbage on the Shanghai streets, the fish in the market, the brine of the water beside the river. Shanghai in this era does not seem like a fun place to be, but wow, did it leap off the page and drag me in every single time I opened the book.

This feels like a ramble/gush at this point, but my last point is just about how gorgeous the writing is. Chloe Gong has a wonderful way with words, and the way that she paints the picture of this story on every page is just beautiful.

People tearing their throats out, lovers at odds, a mysterious man and his monster.... What's not to love?

It didn't jump out as fantastical to me, it had its slow parts, it hovered over the line of politically interesting and boring... But the story was fantastic.

The story, the questions, the betrayals and cunning plans.... That's what kept you coming back wanting more.

Having to know more.

I was excited to read this one and wasn't let down, now I can't wait for the next one.

A Must-Read YA pick 2020. In 1926 Shanghai, 18-year-old Juliette Cai, heir of the Scarlet Gang, and her first love-turned-rival Roma Montagov, leader of the White Flowers, must work together when mysterious deaths threaten their city.