Saved Searches Advanced Search
Please note our Holiday Hours: Wednesday, Nov. 25: 10 a.m.–6 p.m. with TPL To Go hours from 10 a.m.–12 p.m. and 3–5 p.m. Thursday, Nov. 26: Closed.
Returned items may appear on your account for up to a week while they are quarantined. Please disregard any overdue notices about these items. Any fines accrued from this process will be waived.
Visit TPL Now for current services updates, book drop and phone hours, TPL To Go info, and more.
Print 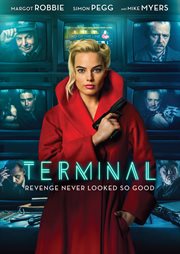 One of the lesser revenge dramas from the UK. Character development is poor, and camera work tried to be stylish at places but failed. Even the presence of veteran actor like Simon Pegg cannot save this film. I think it tried to be semi-art-house, but the end result is disappointing.

Entertaining dark humor. Neo noir type of film. The overall direction of the plot left alot to be desired. Left me feeling like it was kind of a pointless story. Not a bad watch but nothing particularly memorable.

I checked this out because Margot Robbie was in it. It is a disjointed, poorly portrayed story of a woman seeking vengence. Poorly fashioned, poorly acted.

I have to agree with the other comments posted. This film is somewhat confusing to start but if you stick with it ties together with an interesting twist at the end. Margot Robbie is excellent, as is Mike Myers in a rather sinister role. Those who enjoy David Lynch films, as I do, may find this one intriguing.

.
Well written and acted with amazing visuals but the big reveal (which I had guessed and then dismissed, out of hand, as being too silly) almost ruined it.
.

A film rich in colour and angles, not your normal U.S. canned films, but one that pulls the viewer in. Top notch acting. This is along the lines of Brazil, and Blade Runner, with a twist. If you have a long vocabulary in film you will love it.

What a confusing piece of junk. After 1/2 hour we came to the conclusion it would not get any better so hit the eject knob and that was that, back to the library for this DVD. This will go down in my top 5 worst movies I have watched.

Modern take on film noir set in dystopian Bittain. The lighting contributes to the edginess and the sets (filmed in Hungary) are interesting. Dark and crazy---if you enjoyed "Suicide Squad" you will probably enjoy this movie. The ending explains the confusing plot that meanders somewhat---and is likely to have you oscillating between sticking with it and shutting it off.

Gave it twenty minutes and then...eject.

Did I end it too soon? It didn't feel like it was too soon. Bizarre stuff. Visually creative and all that, in a stylish 21st century noir sort of way, but...watching people sit around in a diner swearing at each other...hmm.

Over 100 people waiting for this.. Margot Robbie fans, I suspect. I'm one, too. But a star sometimes can't save the movie.

Weird - lasted about 10 minutes - pay attention to the 2 stars

"Curvaceous, cream-skinned belle seeks sleek Romeo for candlelit romance and walks in the moonlight. City based." See, that's code, that is.
That's deviants' code. Pervert poetry. Translates to "Fat bird wants outside seeing - to late at night." See?
-Well, that is funny.
"Slight, retiring young gentleman seeks decisive, practical lady to draw him from his shell. Friendship and romance. Suburban residence." Translation:
Skinny pencil-dick seeks dominatrix for abuse and humiliation. Has own dungeon. World's gone to shit, and all anyone can think about is their next dirty one down the docks.
===
You're a bit odd, aren't you?
-Unquestionably, but death is by far the best bit.
Of what?
- Of life!
Did you read that in a birthday card?
...
We're all dying, you realize. Slowly, painfully. Just a matter of time, friend.
See now, that's the spirit!
...
Are you being survived?
-I have no idea what that means.
Wife, kids?
-Okay, you can't say that. It's "survived by."

There is a place like no other on Earth. A land full of wonder, mystery,
and danger. Some say to survive it, you need to be as mad as a hatter,
which luckily... I am.
===
Bless me, Father, for I have sinned.
- Easy, sweetheart. I don't think you're supposed to smoke in here.
Guess I've sinned again then.
===
Why are you shaving? Two weeks we've been in here all day and all night,
and suddenly you're putting your face on. What's all that about?
-I've got a date later.
Have you? Bollocks. Only date you've got is with a camp bed and your right hand, you wanker.
===
A man... who needs a train... but not the journey... is a man with a problem.
===
You can't smoke in here.
-Well, there's no one else in here.
They're not smoking either, are they?

Look, I'm just the middleman. Think of me as a half-naked waitress
delivering goods from one anonymous party to another anonymous party
for a fee.
===
There's something different about you, bottle blonde.
-Besides my stocking suspenders, plunging cleavage, and full face of harlot's makeup?
===
It's moral carte blanche. It's an open invitation to anarchy. You can spend
your last days on Earth doing whatever you want. Rape away. Smite to your heart's content. Pillage the precinct till the gutters run red, and none of it will matter because you'll be dead by Sunday. So go nuts! You know, dry roasted, sniper in the clock tower nuts.

It is a criminal offense to interfere with either municipal storage or precinct property. Any suspicious activity must be reported to the appropriate
authorities immediately.
===
Why don't you piss off, old man? Mind your own business.
-Supervisor. Night Supervisor. Duties to include sweeping of concourse and platform, maintenance and attendance of all...
Shut up! Tell me something. Do I look to you like the sort of individual that creeps into the station in the dead of night, breaks open a locker, removes a suspicious-looking briefcase, and then lets the fccking cleaner... sorry, night supervisor... run off and tell tall tales about it? Do I not strike you more as the sort of highly motivated, highly vicious individual that would not kill said night supervisor and stuff him into the fccking locker?

When rich villains have need of poor ones, poor ones make what price they will.
===
You're miserable, touchy. Quite frankly, not great company.
-Oh, thank you.
Want my advice?
-No.
Just end it. Have you ever considered counseling? Every minute of every day, you're bombarded with a series of hazardous and potentially life-ending situations to choose from. Jump in front of a bus. Have a bath with your toaster. Fall on your butter knife. Tall buildings, rivers, bridges, trains.
There are more ways to end your life than there are ways to live it. All this pissing around in train stations in the middle of the night would be over. End this nothing, and all it takes is some balls.

You missing your bottle blonde? Geez, you're like a hormonal teenager. She's gonna be the death of you, that fzcking girl.
===
Oh, how's this for a headache? Take a pencil, jam into tabletop, slam head down onto pencil, dead in five seconds.
- That's foul.
===
Let me hear your confession. Repent and thou shalt be saved!
-That's not even from the Bible.
Okay, that is the graffiti that's written on the bus stop opposite the terminal.
-That's disappointing.
That's pretty much my entire knowledge of scripture. Try this one: Repent, turn back, and thy sins will be blotted out. Not really as catchy, is it?
===
To be honest, I can't recall the last time I took confession. I think it's more than 10, but less than 20.
-Days? Months? Not years, surely.
Don't get pissed off at me for telling you the truth.
===
And my immortal soul?
-Overrated.
Overrated?
-Have you done something to put your immortal soul in jeopardy?
Well, there you go then.Nothing to worry about.

"The time has come, the walrus said, to talk of many things. Of shoes
and ships and sealing wax, of cabbages and kings. And why the sea is boiling hot and whether pigs have wings."
-I don't get it. It's gibberish. It's all like this, the whole bloody book. It's just fxcking drivel.
Well, I'm sure Lewis Carroll will be suitably apologetic when he finds out how upset you are.
===
Do they have an assassins section in the classifieds? "Wanted: tall, dark,
anonymous stranger. Must have own rifle."
===
Try this on for size. You're just going about your daily business, then one day, you're on your way home from a long day in the classroom... Shot in the head. Last thing you would've expected.
-I think it's safe to say if I'd paid somebody to kill me, I'd be expecting to be killed most of the time. You just have to, you know, try not to think about it.

What is the worst that could've happened, Bill? You'd be dead. It would all be over. No more pain, no more suffering. No more waiting for a train that isn't coming. What if I had just let you fall? None of this would be happening. This conversation, your smoldering anger, your eloquent bloody resentment Nothing.
-Not like that. I do not want to go like that.
Like what, Bill? Trains, cars, gunshots, it's all the same end product. I think the question really is, do you want to go at all? Standing on the edge really
makes you think, doesn't it? Nothing.
===
Off a tall building, for the sake of argument, or in front of a train.
-I must say I have explored the idea of trains somewhat.
Hey! Short, sticky, and sweet. Before you know it, -you're strawberry jam
and dental fillings.
-You really can paint a picture, Annie.
===
Ooh, what about a hit and run?
- Oh, now, I have a problem with that.
Go on.
- What if I just get mangled? He'd have to reverse back over me. That's just horrifying.

Did you find it was easier to get attention if you were the freak, the weirdo,
the angel-faced kid with a heart of darkness? I bet you were a cutter, weren't you? I bet you loved a good razor blade. Somewhere obvious where everyone could see the scars. Did you have a little friend, a little accomplice? Somebody you could go off behind the bike shed with and burn each other with cigarettes?
===
Come on, Bill. Where's your sense of adventure?
-Warm and dry and congealing with my coffee.
===
Like two lovers go their separate ways in a rainstorm, or lightning strikes
as the murderer's revealed. It adds gravitas. It would hardly be as nerve-wracking if the serial killer stabbed his victim to death in a sunny park, would it? Much better in a dark alley in a mist.
===
I thought I was a junior partner.
-Oh, that's just the flash way of saying "apprentice."
===
You want to play a game?
-Do I look like I play Snakes and Ladders to you?

Has anyone ever told you that you are a two-faced, treacherous, manipulative, callous little bitch?
-Oh, you have no idea.
===
I thought we were partners.
-I've already got a partner.
===
I've got a little surprise for you.
-Are you wearing that stripper getup under that red coat? Stockings, suspenders?
===
Your girlfriend's doing all your thinking now, is she?
===
You'd sell your own partner down the river for 30 pieces of silver.
-I like loyalty I can buy.
===
Orphans always make the best victims, don't they, William? But chalk-stained fingers leave indelible marks on little girls' panties. Consider this
divine retribution. Burn in hell.
===
I have known silly little girls like you all my life! Naughty, naughty little girls
just like you!