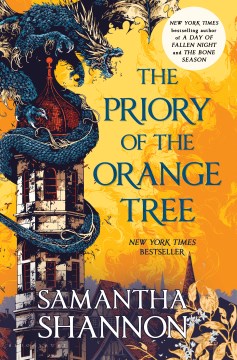 The Priory of the Orange Tree

This book has some of the best worldbuilding I've read. I love how it keeps revealing more aspects of the world and how so many of the twists revolve around finding out more about how it works. It made it so much fun to read!

I loved this book so much. I like the way the plot untangled slowly until all the secrets of the past were revealed, and the writing itself is beautiful and has lots of lines or images that stick in your mind. also , loved that queer rep, and how it just existed without having to be explained and without any characters complaining or attacking it. this book is a thick boy and low-key hurts your wrists to hold up, but it's a good time.

In general, I liked the book. The book had tried to create a sense of solidarity (as many fantasies do) with our own reality by creating its Western/ Eastern schisms and also image of the dragons. The overall plot was acceptable and interesting enough to follow through.
Nevertheless, the plot, its tropes of characterization, gender statements and symbolism all stayed painfully superficial throughout the book. The author could have expanded on the characters and deepened our understanding of them. Her way of treating queer relationships seems to be more of following on existing trends and a way of attracting readers/ reviewers rather than one of any true discovery and demystification.

I just finished this book, and honestly, I'm really sad to do so. Sometimes a story comes into your life, and you just want to go through it forever, and not have to ever let go of the characters that you've come to love so much, and this was definitely one of those. I will say that one of the things that is so refreshing about this novel is that it's ability to have a mixture of male and female characters in positions both high and low. You won't find women being subjugated and injured in the way that you see in other fantasy novels. Of course, there are women who are injured and, yes, even killed, but they go through the story has controllers of their own fate, and the decisions that they make are their own. I cannot stress how amazing and refreshing it is to see that in a high fantasy novel. It's very natural, and there never seems to be too much todo about it, which is terrific. In addition, I read the book in like three days, something that I haven't done with a novel since I was a kid. I spent every waking moment (when I was actively driving, or at work) just devouring the pages, and wanting to know the next thing that happened. It felt to me like such a special thing that while I wanted it to go on forever, I was desperate enough to want to know what happens next.

Yes, there are queer relationships in this novel. As a queer woman myself, it was one of the reasons that I chose to read it (in addition to the feminist aspects, and the fact that women aren't subjected to sexual violence like in so many other fantasy novels). They are well thought out and sometimes heartbreaking. But the thing that I love the most about them is that in this universe, they are not strange or out of place. Of course, there are many things to consider when one is in a relationship (especially in high fantasy, one's station comes into play), but the part that the participants are the same gender doesn't even come up, and that is just awesome. One of the relationships, one that is central to the story is so beautifully written that I would often go back and re-read parts to feel immersed in them again. It was just such a lovely feeling that I didn't want it to end.

All in all, this was just such a great book, I highly recommend that you read it. Honestly, this puts me in mind of G.R.R. Martin or J.R.R. Tolkien except women, queer folks and PoC aren't relegated to side characters, slaves, monsters and servants. They are alive and vibrant and central to this (AMAZING) story. It really shows how good fantasy can be, and how rich it can be when there are a variety of stories told. If you're looking for what modern high fantasy can look like today, if you're interested in the stories of interesting, brave and powerful women, if you're looking for tender queer stories in the backdrop of high fantasy, if you're just looking for a cool story with dragons: This is for you. Please read it, don't wait, you'll love it.

Simplistically written like a fairy tale targeted at a pre-teen audience. Only persisted for 28 pgs.

This is a book with mostly female characters in a medieval-type world and not one of them is raped (it's not even hinted at!)... What more is there to say? 5/5. This book is huge but easy to read and the story comes together so well. Could not recommend it enough if you like fantasy.

I loved this book so very much.. Finished almost half of it, and I loved the way how the secrets are gradually revealing.

First, if you can read the ebook, read the ebook. I was a tiny weakling when I started this hardcover and now I am strong like bull.

Besides a cool "magic system" (although it doesn't feel like magic per se), there is backstory to the history of each kingdom or queendom, religious differences, and representation galore that isn't forced. (And on the representation issue, let me add that I read this right after another high fantasy series that I like, but which has no representation, and it suffered for the comparison. Having a female lead isn't the only thing we want from fantasy these days). But we also get dragons and that definite Thrones feeling that anything can happen and the good guys won't always win, without the bitter taste of disappointment when some hack writer is left in charge of finishing the story, because this story is done.

This is a huge standalone with perfect plotting and characterization. The Priory could have easily been sold as a trilogy and I am soooo glad that they kept this story together, because the level of detail would have been hard to remember across a year's time from the previous episode. And so I would say, to get the most out of it, go into it headfirst and plan to spend a lot of time here. Even with the amount I read it took me a month to finish this monster, but it's a book I would consider rereading.

This is a solid, stand-alone fantasy book with a fairly typical good vs evil plot. It's refreshing in that it is feminist and that homosexual relationships are normalized. The world-building is good--the mythology, in particular, is interesting--but at times, the characters feel flat. Read this one if you liked the Neverending Story or want fantasy with equality.