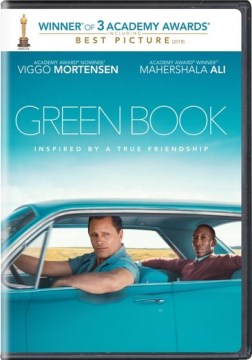 Based on a true story from 1962, this film stars Tony “Lip” Vallelonga (Viggo Mortensen), a tough, white, Italian-American bouncer living in the Bronx known for his willingness to get a little rough to achieve results. Dr. Don Shirley (Mahershala Ali), a black, highly regarded pianist recruits Tony to come on a tour with him in the Deep South. The real-life tour came only six years after Nat King Cole was attacked on stage by the KKK and swore off performing there again, so while the movie portrays this as a somewhat begrudging recruitment, it was a necessity for Shirley to complete the tour safely.

Throughout the trip, the pair use “The Green Book” - a guide created in reality by Victor Green called, "The Negro Motorist Green Book." It lists hotels, restaurants, and other essential travel stops that were safe for black people. As the two are secured in close quarters, they become good friends. From Dr. Shirley helping Tony write letters home to his wife with more eloquence to Tony's good-natured but boisterous demeanor pulling Dr. Shirley from his shell, the watcher gets to enjoy this wholesome friendship's beginnings from their seat. That is what happened in the movie, anyways.

Though made in collaboration with Tony Vallelonga’s son, Nick, Dr. Shirley’s family has spoken up themselves, claiming it is “full of lies.” Excerpted from a statement from his niece, Carol Shirley Kimble, “It’s once again a depiction of a white man’s version of a Black man’s life.” And, indeed, the film itself reflects that. Tony is racist, he is depicted as such in overt ways in the beginning and the implication is that over the course of the movie he changes, despite continuously saying and suggesting racist things throughout which are only verbally rejected at one junction. The events of the movie do little to suggest this dramatic turnaround would be the outcome for someone who was portrayed as consciously racist as Tony. One online reviewer, Josh Spiegel, said, “The story of how that racist guy who says, “I’m not racist, I have a black friend” met his black friend.” This review seems to strike a chord, as it is the most liked on the list.

Though charming, at times humorous, and brilliantly acted, when watched without taking the content at face value, the plot and lessons seem cheapened, more of a way to present seemingly progressive ideas in a non-confrontational, palatable manner.

This is a great movie, authentically set in the 1960s.
Great storytelling, superb acting.
Heartwarming.

There is nothing to dislike about this movie: it's funny, very touching, with impeccable acting, and a true story above all. Vigo holds your attention like no one else. The special features were also awesome!

Very good movie based on a true story.

- quite a controversial pick for Best Picture

Viggo Mortenson seems to pick roles that are always watchable. This movie is a great laugh, not to get to serious about it as a work of art.

The film is entertaining and wrung a few tears; not all entertainment is wholesome.
The scenery and sound track both are candy. The two leads do wonders with cardboard characters.
On the positive side, many things in the movie are factual.
Don Shirley, often called doctor because of two honorary degrees, brought his classical chops to popular music. The Lip character likens him to Liberace; that's not far off. He sold his music mostly as jazz, 'The Water Boy' his biggest commercial hit.
It seems only one number performed by Shirley is included in the soundtrack, 'The Lonesome Road'; others from his repertoire are performed by Kris Bowers, who has done other movie work.

Really very good.
A white man is paid to drive a black concert pianist around the deep south in the early 60s. Everyone learns something.
It's really cool. Great direction, really strong acting.
Recommend.

Well written dialogue, tightly acerbic and often funny. Strong performances from Ali and Mortensen as an initially polar opposite odd couple urged by circumstances to walk in each other's shoes.
Unlike most tepid road trip movies, this one's unusually entertaining.

FriendsDragonsCats44 thinks this title is suitable for 12 years and over

vcc thinks this title is suitable for 13 years and over

arwolf thinks this title is suitable for 13 years and over

A powerful quote, sourced from IMDB :

"Yes, I live in a castle, Tony! Alone. And rich white people pay me to play piano for them because it makes them feel cultured. But as soon as I step off that stage, I go right back to being just another nigger to them. Because that is their true culture. And I suffer that slight alone, because I'm not accepted by my own people 'cause I'm not like them, either. So, if I'm not black enough and if I'm not white enough and if I'm not man enough, then tell me, Tony, what am I? "

31 quotes in IMDb, thanks to the contributors.

This quote (in IMDb) turns the direction of the film to be an inspirational comedy:

Tony Lip: You know, when you first hired me, my wife went out and bought one of your records. The one about the orphans?

Tony Lip: Yeah. Cover had a bunch of kids sittin' around a campfire?

Dr. Don Shirley: Orpheus in the Underworld. It's based on a French opera. And those weren't children on the cover, those were demons in the bowels of Hell.

Tony Lip: No shxt! They must've been naughty kids!