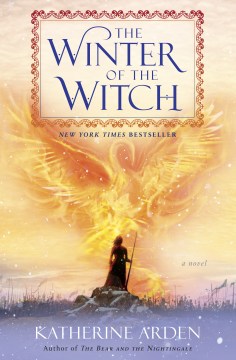 The Winter of the Witch

"Following their adventures in The Bear and the Nightingale and The Girl in the Tower, Vasya and Morozko return in this stunning conclusion to the bestselling Winternight Trilogy, battling enemies mortal and magical to save both Russias, the seen and the unseen. Reviewers called Katherine Arden's novels The Bear and the Nightingale and The Girl in the Tower"lyrical,""emotionally stirring," and"utterly bewitching." The Winternight Trilogy introduced an unforgettable heroine, Vasilisa Petrovna, a girl determined to forge her own path in a world that would rather lock her away. Her gifts and her courage have drawn the attention of Morozko, the winter-king, but it is too soon to know if this connection will prove a blessing or a curse. Now Moscow has been struck by disaster. Its people are searching for answers--and for someone to blame. Vasya finds herself alone, beset on all sides. The Grand Prince is in a rage, choosing allies that will lead him on a path to war and ruin. A wicked demon returns, stronger than ever and determined to spread chaos. Caught at the center of the conflict is Vasya, who finds the fate of two worlds resting on her shoulders. Her destiny uncertain, Vasya will uncover surprising truths about herself and her history as she desperately tries to save Russia, Morozko, and the magical world she treasures. But she may not be able to save them all"-- Provided by publisher.
Publisher: New York : Del Rey, 2019
Edition: First edition
ISBN: 9781101885994
1101885998

Nothing says “must read” quite like a Librarian’s stamp of approval! Every month LibraryReads.org releases the top picks for the month, as voted on by Librarians across the country. Subscribe to Tacoma Library’s e-Newsletter service and get the Library Reads picks and more delivered straight to your inbox. Check out the LibraryReads’ picks for January 2019: Once Upon A River An Anonymous G... (more)

Nothing says “must read” quite like a Librarian’s stamp of approval! Every month LibraryReads.org releases the top picks for the month, as voted on by Librarians across the country. Subscribe to Tacoma Library’s e-Newsletter service and get the Library Reads picks and more delivered straight to your inbox. Check out the LibraryReads’ picks for January 2019: Once Upon A River An… (more)

In a way the ending to this series is frustrating but there was a part of it I also really loved (and one I really hated). I think this book starts looking to the future and how Vasya can exist safely as herself in a world that is dangerous to her.

I love the concept of magic just becing imagining things as you want them to be but of course this way of thinking leads to madness and this is witches are often madwomen. It's also interesting how this is different for chyetri. It was explained but I can't quite remember the explanation.

And now for SPOILERS!!!

I love that ultimately Vasya brings all the chyertri together, both 'good' and 'bad'. Although considering this includes the bear after they go to a considerable effort to bring him this is rather frustrating.

I do not think Sasha had to die so obviously that was a part of the book I hated. I loved the part where they bring Solovey back to life though because he is awesome and Vasya deserves to have her horse.

A great end to the trilogy! The author does a great job with the historical fairytale genre and has a really lovely writing style. I know she wanted to tie the ending to a real event in history but unfortunately that added too many characters and locations for me to follow properly. I also thought that we might get to see Vasya’s other siblings in the last book, but they never came back after the first book! Regardless of these details, all in all I really enjoyed the entire trilogy!

The conclusion to a pretty great series. Definitely recommend these books!

Although at times I felt Vasya was made to ignore certain things in order to keep the plot and/or mystery going for longer than it should have, and the ending itself was a bit rushed compared to everything else, I still enjoyed this very much. Overall, a great series.

I have to recover a little that this series is over. But, happily, the final book was as beautiful and as satisfying as I could have wished.

What I loved about this book in particular was how much time was spent with the magical creatures of this world. Like the other books, the historical is weaved into the fantastic, and Arden's extraordinary skill makes it all work. She creates this gorgeous atmosphere that is spellbinding.

And her lead character, Vasya, is unforgettable. It's rare to have such a convincing and interesting character and character arc. Vasya grows and changes and I believed her every step of the way. Brother Sasha was another favorite. The bravery and sacrifice of Arden's characters brought me to tears.

I feel sorry for whatever I read next for having to follow this.

One of the most beautifully written series ever. I cried, I laughed, and I was devastated when I turned the last page that it was all over.

A beautifully imagined combination of Russian folklore and historical fiction. This is the final book in the Winternight trilogy that simply got better with each novel. Enchanting to read, even more so when listened to on audio.

I really liked the book. Truly, I did. But Am I the only person who thinks that the last 100 pages were dragged out, possibly unnecessary??

Brilliant. The final book in the trilogy was the best. This would have to be the most enchanting fantasy series I have ever read. The characters, mystery and story were all exceptional. Well worth reading the series

Warning: May contain spoilers for The Bear and the Nightingale and The Girl in the Tower.

Don't you love it when a whole series is great? No middle book slump. No let-down ending. This series has absolutely everything I want and nothing I don't. The Winter of the Witch picks up right where The Girl in the Tower left off, and throws us right into the action. Vasya released the firebird at the end of the last novel, trying to save her cousin, the Prince of Moscow, but in doing so, she inadvertently set quite a bit of the wooden city on fire. Now we find her dealing with the consequences of her actions, consequences that are made more dire as priest Konstantin Nikonovich thinks to take the ultimate prize from Vasya, her life. Yes, that's just the start.

Arden throws us headlong into heavy action, whipping us back into her world of 14th century Russia. In this finale, it is the trio of Vasya, Medved (the Bear), and Morozko (the Winter King), who take center stage. After escaping Moscow, Vasya must decide if she wants to help the city or turn her back on it. Medved represents the forces of chaos and life, still holding sway over the disillusioned Father Konstantin. Morozko, who is also the death God, holds sway over winter. Arden does an amazing job of humanizing each of these characters of raw force. With the simple word "please" Medved becomes more understandable. With a touch, Morozko is the hero we want.

Arden focuses heavily on the dichotomy of paganism and Christianity, as she even explains in her afterword. Up until the Russian Revolution many still practiced this idea of dual faith, following Christianity on the one hand but maintaining a belief in the spirits of the home and nature. Where Konstantin represented the fight for Christianity over any other belief in previous novels, here Vasya must deal with her own family, as both her sister, Olga, and her brother, Sasha, fear for her soul, even as they accept that she can see beyond the world that they know.

Arden deals with historic elements that create the final conflict of the novel, but to say more would be a spoiler. So, I'll just say that Arden is a storyteller. I gasped, cried, and was held completely spellbound until the last page was read.

Sexual Content: There is a sex scene about halfway through the novel, though nothing is graphically described.

Frightening or Intense Scenes: Scenes of the dead rising may be much for readers under 15.

miraellie thinks this title is suitable for 15 years and over

“It is not for men and women to presume what the Lord wishes. That way lies evil, when men put themselves too high, saying, I know what God wants, for it is also what I want.”