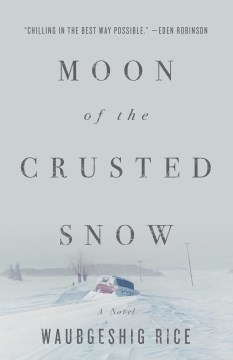 Moon of the Crusted Snow

"A daring post-apocalyptic novel from a powerful rising literary voice. With winter looming, a small northern Anishinaabe community goes dark. Cut off, people become passive and confused. Panic builds as the food supply dwindles. While the band council and a pocket of community members struggle to maintain order, an unexpected visitor arrives, escaping the crumbling society to the south. Soon after, others follow. The community leadearship loses its grip on power as the visitors manipulate the tired and hungry to take control of the reserve. Tensions rise and, as the months pass, so does the death toll due to sickness and despair. Frustrated by the building chaos, a group of young friends and their families turn to the land and Anishinaabe tradition in hopes of helping their community thrive again. Guided through the chaos by an unlikely leader named Evan Whitesky, they endeavor to restore order while grappling with a grave decision. Blending action and allegory, Moon of the Crusted Snow upends our expectations. Out of catastrophe comes resilience. And as one society collapses, another is reborn."--provided by publisher.
Publisher: Toronto, ON : ECW Press, [2018]
Copyright Date: ©2018
ISBN: 9781770414006
1770414002

A post-apocalyptic/survival story told from a First Nations perspective. Rice imagines what the people living on a northern Canadian reservation might experience if a collapse in society meant that they were cut off from the wider world. Lots of references to Anishinaabe culture and beliefs throughout the book, and it's short and fast-paced at about 6 hours on audio. Beautifully written and scenic. Definitely worth a listen.
It's on Hoopla, in ebook and audiobook with no waiting: https://www.hoopladigital.com/artist/3490553198

I'm of two minds about this book. If you want to read a typical dystopian novel with brutal struggles for survival, I'd say give it a miss. It's too short, the characters are mostly two-dimensional, barely fleshed out ideas rather than actual people, and it contains way too many references to printing community memos. When your characters are facing the end of the world as they know it and you put your audience to sleep with multiple paragraphs about avoiding gas shortages, but almost none dealing with the implications of the total destruction of modern society, ya done goofed.

If you want to read more books by Indigenous authors and better understand how First Nations people feel about colonizers (and how they articulate that into a fictional narrative) I would highly recommend it. The villain of the story might as well walk around wearing a big sign that reads "I AM A PERSONIFICATION OF THE MOST TOXIC ASPECTS OF COLONIZATION." Also, it was nice to see FN protagonists depicted as devoted, sober family people rather than racist caricatures.

Still, this is too much of a failure of the dystopia genre (which is my favorite) to get a full thumbs up from me. I don't regret reading it but I felt duped at the end. It's like when I went to see Coyote Ugly expecting hot girls dancing around on barstools and got a coming-of-age movie about a musically talented country bumpkin making it in the big city. This is fine, but it's not what I ordered.

This is an excellent book, especially to be read now, during the coronavirus pandemic. The story moves beautifully, carried along by the wonderfully developed characters. A must read!

It was a very interesting read about the small re3sevre in northern Ontario the author did a great job of telling an exciting story about a community dealing with survival. The people in the story

A haunting post-apocalyptic novel written by an Anishinaabe writer and journalist. The story takes place on a reserve in the wilderness of northwestern Ontario. Rice’s vivid descriptions of the land and the eerie presence of a lurking evil make this novel a page-turner.

If you enjoyed the novel, The Marrow Thieves, you will definitely enjoy this read. This novel focuses on Canadian Indigenous people that have been pushed to the cold side of the world by white men (the unfair treatment of Indigenous people). It's a story based on the shut down of power supplies and the need for survival. To be honest, I found this novel quite haunting. But the reason why I enjoyed this novel was hearing about how powerful cultures can be and how they can help families and communities come together during troubling times. Not only that, but I felt as if I were in the novel and part of the apocalypse! If you prefer novels that put you at the edge of your chair, this one is for you! 4/5 stars
@Bookland of the Hamilton Public Library's Teen Review Board

I read this book as one of my book club reads. Overall, this wasn’t a read I enjoyed and not one I would recommend. Rice did do a good job of portraying the indigenous people honourably and of bringing light to life on reservations. However, I found the first 80-100 pages to be a lot of preamble. It was a good reminder of how technology has made us so disconnected to nature, and also a good reminder of how unprepared we are in an apocalypse. I appreciated the read, but it isn’t a book I’d purchase and lend out.

Bookworm_112 thinks this title is suitable for 16 years and over

Just as late fall is turning to brutal winter, Evan Whitesky's reserve in Northern Ontario begins losing utilities. First, cell phones and satellite service go down, then the power grid fails. While initially unnerving, the community mostly laughs it off; service to the reserve has never been good, and they still have enough backup in food and fuel to make a go of it for a short while.

However, as they get their diesel generators in place and distribute food, it becomes clear something has gone very wrong down south. No one has heard anything from Toronto or any nearby urban centres; and two students return, haunted, from a nearer college to confirm that help is definitely not on its way. Eerily, the students are followed by a very large white man, Justin Scott, who promises he can help the community survive even as he begs assistance from the reserve. They grudgingly give him a place to stay.

As the winter wears on and supplies wear thin, Scott's influence over some in the community grows, along with a general sense of menace. Evan and other community leaders try their best to prevent death and desecration. But, dwindling resources and Scott's manipulation spiral together, and crisis hits just as winter runs deepest, throwing the community's survival into question.

Fast-paced, unsettling in every sense of the word, and grounded in Anishinaabe cultural traditions, *Moon of the Crusted Snow* is highly recommended to any fans of gritty, post-apocalyptic fiction.