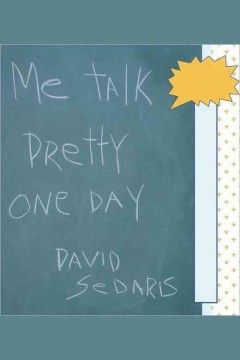 Me Talk Pretty One Day

Me Talk Pretty One Day contains far more than just the funniest collection of autobiographical essays - it quite well registers as a manifesto about language itself. Wherever there's a straight line, you can be sure that Sedaris lurks beneath the text, making it jagged with laughter; and just where the fault lines fall, he sits mischievously perched at the epicenter of it all.
Publisher: New York : Little, Brown & Co., [2000]
Edition: First edition
Copyright Date: ©2000
ISBN: 9780316777728
0316777722

List - A collection of short stories, as part of the Extreme Reader Challenge

List - A beach read, as part of the Extreme Reader Challenge

A quick read but really not very funny. Some things were clever, some were just snide. Can't recommend

This was the first book I read by David Sedaris and it is pee-your-pants funny (yes, that actually happened!). This next bit doesn't sound like a recommendation for the book but there is a section where Sedaris is attempting to be an art student and an artist while stoned on crystal meth. I've never read anything more hilarious in my life. I read it to my art-student daughter, who said it was so close to the reality of art school. If you want a good laugh read anything by Sedaris, particularly this book.

I chose this as the last book selection of the year for my Books & Beer book club and it was to mixed reviews. At the risk of being sexist, most of the members that attended this month were female and I believe, for the most part, David Sedaris' type of humor might be a little more well received by those of us toting around a Y chromosome. That being said, I LOVED it!

I was having a difficult time getting my hands on a copy (I tend to borrow or buy used copies of most books) so I ended up first listening to the audio book. In my opinion, that was the best way to introduce yourself to Sedaris. Dry, almost-monotone, lisp-peppered... his delivery, if you are not familiar with him, brings his essays to life. I also read the digital version but I found I missed Sedaris' narration.

On a bad note: the audio book only appears to come in an abridged version so six of the essays were cut (65 pages or so) from the final product. None of them were among my favorites but I don't do abridged.

Notable essays: Go Carolina, Today's Special, See You Again Yesterday, Me Talk Pretty One Day, Make That a Double, I Pledge Allegiance to the Bag, and Picka Pocketoni.

As a French-as-a-second-language person myself, I loved, and could relate to, every inane French grammar rule Yes, vagina SHOULD be a feminine noun, not a masculine noun. MA VAGINE, not mon vagin! I tried to start a rebellion to have all females retake ownership of their vaginas (but the masculine modifier still prevails.)

Favourite quote (only because puns are my guilty form of pleasure):

David Sedaris on audiobooks: If a person who constantly reads is a bookwork, then I was quickly becoming a tapeworm.

This book is so funny. I laughed so hard while reading it.

I guess I had too high an expectation for this book since people were talking about how hilarious this book was. Also, t's more than true that people have their own taste of humor. The first 2-3 chapters were fun to read, especially the first one. After a while, I don't know why by I started to find things repetitive and my disappointment made it a real torment to drill through the book.

This book came highly recommended, so, of course, my expectation was really high. I suppose that set the benchmark a little too high, because it didn't seem to be as hilarious as many said it is. That's my opinion though. Everyone has a different idea of what constitutes humor, so others may fall out of their chair laughing.

a book to read in snatches; boring if read straight through

I started reading David Sedaris's short stories since I heard him interviewed on CBC Q. Since then I have been through just about every one of his short story collections. Quick reads, funny, and the human behaviour observations are as entertaining as they are poignant. The occasional story may be a little over the line, but I have rarely picked up one of these books without reading it in one sitting.

Follow seven beers with a couple of scotches and a thimble of good marijuana, and it’s funny how sleep sort of comes on its own.

I liked the idea that a part of one’s body might be thought of as lazy — not thoughtless or hostile, just unwilling to extend itself for the betterment of the team.

"It's a common mistake for vacationing Americans to assume that everyone around them is French and therefore speaks no English whatsoever. [...] An experienced traveler could have told by looking at my shoes that I wasn't French. And even if I were French, it's not as if English is some mysterious tribal dialect spoken only by anthropologists and a small population of cannibals."

white_human_110 thinks this title is suitable for 15 years and over