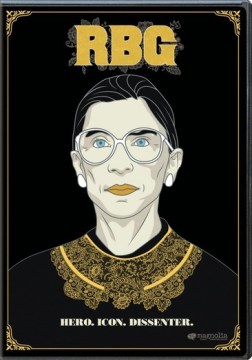 About an ACLU lawyer who spends her time on the Supreme Court disagreeing with decisions. She survives TWO cancer scares to bad-mouth a Presidential candidate, classy lady.

Excellent documentary on the inadequacies of the law pertaining to sex and equality. She was workaholic. and smart. Was good to see the clips of family and other justices. Husband Marty was humorous.

Well made documentary about an extraordinary person. How many people could survive raising a young child, caring for a sick spouse, and attending Harvard law school all at the same time?! By her own admission, on 2 hrs. of sleep per nite, too. Amazingly strong, intelligent, dedicated, admirable person.

I liked it a lot, RBG is a big character and deserves to be showcased because of her work for America. Long live RBG.

Excellent documentary about Notorious RBG, who has made such an impact on women's rights. She let her intellect do the talking for the last 50 years, fighting for legal equality for women in the workplace and at home, culminating in being named to the Supreme Court as just the second female Justice. This film, coupled with the dramatization of BaderGinsburg's story in "On the Basis of Sex", serve to humanize this unassuming, opera loving woman whose life's work will long be remembered as having aided so many! Highly recommended!

I thoroughly enjoyed this intelligent and inspiring her-story. (I then tried to watch "On the Basis of Sex" and had to turn it off after 10 minutes, it's so poorly done.)

This DVD is 98 minutes long. I liked this Biography Documentary DVD. It was comprehensive and informative. At the age of 85, U.S. Supreme Court Justice Ruth Bader Ginsburg has developed a lengthy legal legacy while becoming an unexpected pop culture icon. But the unique personal journey of her rise to the nation's highest court has been largely unknown, even to some of her biggest fans - until now. RBG explores Ginsburg's life and career. It is good for all ages. It is a little repetitive; thus, it could have been shorter and successfully communicated the same message.

An entertaining educational documentary about one of the leading instigators of gender equality in our society... and a wonderful love story to boot. The original song "I'll Fight" with Jennifer Hudson fits right in at the ending credits. In queue for "On The Basis Of Sex" now.

Great portrait of a strong woman who was known more sometimes for her silence or minimal words as she stood her ground in regards to those things she thought were without compromise. Whether you agree or disagree there is something to be said about her work ethic and inner, quiet, passionate drive.

An eyeopener to how far the women's movement has come in the last 50 - 60 years. And we have to thank RGB and her colleagues for a lot of the progress. A very interesting documentary.

One of the world's greatest jurists, Judge Learned Hand (Billings Learned Hand 1872 – 1961) said, "That the spirit of liberty that imbues our Constitution must lie first and foremost in the hearts of the men and women who compose this great nation... a community where the least shall be heard and considered side by side with the greatest."
===
I ask no favor for my sex, all I ask of our brethren is that they take their feet off our necks. (quoting Sarah Grimké)
===
When I went to college... there was a big Red Scare in our country. Some people in our Congress saw a Communist in every closet and in every corner.
But it impressed me, that there were lawyers reminding our Congress that we have freedom of speech and of the press. So I thought that that was a pretty good thing to do... to help keep our country in tune with its most basic values.

Judge Ginsburg did something no recent High Court nominee has done, spoke at length about her support for abortion rights.

It is essential to women's equality with man... that her choice... that she be
the decision maker. This is something central to a woman's... life, to her dignity. And when Government controls that decision for her, she is being treated as less than a fully adult... human responsible for... her own choices...

Orrin Hatch: I disagree with you on a number of things, and I am sure you disagree with me. But that isn't the issue, is it? And frankly, I admire you. You've earned the right, in my opinion, to be on the Supreme Court.

My mother told me to be a lady. And for her, that meant be your own person, be independent.
===
There were not hundreds but thousands of state and federal laws all over this country that discriminated on the basis of gender. Typical laws of the time like, "The husband is the master of the community. He shall choose where the family will live and the woman is obliged to follow him." There's no aspect of American life in which you were not treated differently. The idea was that... men were the breadwinners that counted and women were... pin money earners. So women woke up and complained.