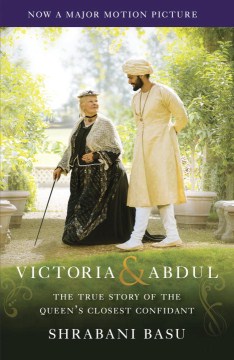 The True Story of the Queen's Closest Confidant

"In the twilight years of her reign, after the devastating deaths of her two great loves--Prince Albert and John Brown--Queen Victoria meets tall and handsome Abdul Karim, a humble servant from Agra waiting tables at her Golden Jubilee. The two form an unlikely bond and within a year Abdul becomes a powerful figure at court, the Queen's teacher, her counsel on Urdu and Indian affairs, and a friend close to her heart. This marked the beginning of the most scandalous decade in Queen Victoria's long reign. As the royal household roiled with resentment, Victoria and Abdul's devotion grew in defiance. Drawn from secrets closely guarded for more than a century, Victoria & Abdul is an extraordinary and intimate history of the last years of the nineteenth-century English court and an unforgettable view onto the passions of an aging Queen"--Amazon.com.
Publisher: New York : Vintage Books, a division of Penguin Random House LLC, 2017
Edition: First Vintage edition
ISBN: 9780525434412
0525434410

haven't read the book but movie was decent

People. A biography that reads like a novel, this is a well-researched book that vividly portrays an unconventional but fruitful friendship.

A wonderful account of affection and devotion in spite of racial and class discrimination. This historical account is supported with a family tree of Queen Victoria's family, maps of India and Great Britain, a list of the main characters; and a couple dozen black and white photographs. The book concludes with end notes and sources, bibliography, and index.

The story of Queen Victoria and Abdul Karim is gracefully laid out from the start of their friendship to the end. Given the amount of primary sources that were available to the author she did a great job telling the story that King Edward (fuelled by paranoia) attempted to erase from history altogether. I picked up this book intrigued by the movie trailers of Judi Dench of this book but history buff as I am, I wanted to read the book first. Most of the time you feel as if you are the Queen hearing the descriptions of India and the smells; feeling the wonder attached to these new senses. Shrabani Basu does a wonderful job of grasping the passion the Queen had for learning the language of the people of India and having Indians on her staff displaying the pleasure she had for their culture and attire. Although her family and household disapproved wholeheartedly against the Munshi she stood by him steadfastly as it is implied he was her only friend. Perhaps the story could also be an example of mob mentality as they relentlessly attempted to discredit him and torment his family even after his death. I am left hoping that, although lost to history, that Rashidan Karim never returned the letters after her death.

A look at the relationship that developed between Queen Victoria, in the twilight years of her reign, and her Indian servant, Abdul Karim, which blossomed into a friendship that delighted Her Majesty and succeeded in infuriating everyone else around her. This book helps to flesh out the story as portrayed in the movie starring Judi Dench and Ali Fazal. A tale of a bored and lonely queen self-consigned to permanent mourning after the loss of her beloved husband Albert so many years ago, only to be followed by a second loss: of her Scottish servant, John Brown, whose conspicuous closeness to the queen had also succeeded in enraging her household. With the arrival of the attractive Karim, Her Majesty's interest is again piqued. Soon he is regaling her with tales of India, intriguing her with exotic curries, and inspiring her to learn Urdu. The queen bestows upon Karim the title "Munshi," or teacher, and the rapid rise in favor of this lowly servant, receiving ever-grander gifts of status, drives the Prince of Wales and the queen's household crazy. Her Majesty, however, becomes enraged at any suggestion of negativity towards her beloved Munshi. Well-researched and highly detailed account of how it all went down.

"It was all to end soon for the Munshi [after the death of Queen Victoria on January 22, 1901]. The King [Edward VII] sent Princess Beatrice, Queen Alexandra and some guards to Frogmore Cottage where they demanded all the letters written by the Queen to the Munshi; they then burnt them in a bonfire outside the house. The King wanted no trace left of the relationship between his mother and the Munshi. Abdul Karim, the Queen's companion and teacher for 13 years, was ordered to leave the country and packed his bags like a common criminal." (p. 281)

"... Queen [Victoria] had left detailed instructions regarding the procedures to be followed after her death ... Once the coffin was arranged, [Dr. James] Reid called in the family and members of the Household to see the Queen for the last time. The Munshi [Abdul Karim] was summoned at the very end. He was allowed to spend a moment with his Queen and was the last person to see her alone. As he left the room, the members of the Royal family entered and the coffin was closed ... The Munshi sat in Arthur Cottage [later] that night, the tears silently pouring down his face. He prayed for the friend who had stood by him for the last 13 years and changed his life. To him, she had been more than the Empress of India ... She had been a friend, a mother and an inspiration. ..." (p. 277-278)