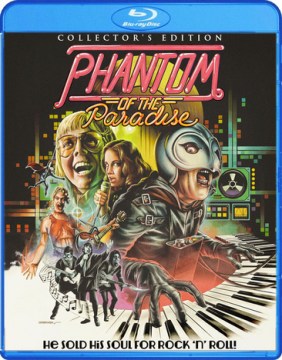 Phantom of the Paradise

VERY GOOD 1974 American musical rock opera horror comedy film written and directed by Brian De Palma, and scored by and starring Paul Williams - which I somehow missed back in the day. A bit whack, but quite enjoyable. Paul Williams was VERY good in his role as Swan, but Jessica Harper was a bit, um, flat as Phoenix.

Love love love this film! Sure, it's a little cheesy. But it has a brilliant soundtrack that I can't get enough of, penned by none other than Paul Williams who also plays the evil Swan.

If you love horror movies and you love rock and roll musicals, this movie is a must watch for you. The performances are fun and quirky but not too over the top, the direction by Brian De Palma is wonderfully unique, and the music by the great Paul Williams is great. This movie deserves much more attention than it gets.

40 years after seeing this at a midnite show paired with Rocky Horror, it is still a cult favorite that delivers to this day. May seem simple compared to todays films, but with the new restored sound and vision, it shines in both. Could very well be a film that in yet another 40 years will be a favorite for some to watch.

This is a wonderful 1974 horror musical. Paul Williams stars in it as the evil record label owner, and he also wrote all the music. This is a definite cult classic not to be missed.

Brian De Palma takes Gaston Leroux’s gothic mainstay and updates it with a big tacky dose of 70s kitsch in this rip-roaring stab at both the Machiavellian music industry and the artistic narcissism it engenders. . With clever spins on the works of Shelley, Goethe, and Oscar Wilde thrown in along with a few subtle in-jokes and a loving smirk at Alice Cooper, De Palma presents a rock operetta that rivals "Rocky Horror" in sheer campiness. The songs are pure AM radio gold, the performances appropriately theatrical, and the elaborately cheesy trappings pay homage to the era of disco dust and polyester. If you’re old enough to remember the 70s this is sure to put a guilty smile on your face.

Wonderful parody of the music business in the 1970's- from noted director Brain De Palma- inventive visuals, combined with pretty great music makes this one to watch.

I SAW THIS MOVIE WHEN I WAS A KID I LOVED THEN AND TODAY. I AM GLAD IT FINALLY GOT THE ACNOWLEDGEMENT THAT IT DESERVES

I can't believe I've never seen this movie before!!! The first 10 minutes (the set up) are a little rough (just outdated), but after that this movie is just sheer genius!!!!!! A masterpiece! Faust meets Phantom of the Opera with Paul Williams as Mephistopheles! Definitely, for those of us who like things a little different, this is a must see.

thunderbirds thinks this title is suitable for 12 years and over

Winslow Leach is a songwriter who gets his music stolen by a major music producer called "Swan" (played by Paul Williams) Swan steals Winslow's music, makes it a hit, and frames Winslow for a crime. Winslow at this point is fed up, and he gets so fed up he destroys he face (accidentally) After he destroys his own face, he puts on a mask, and becomes "The Phantom" The Phantom's only goal is to haunt Swan, and freak out everyone who attends Swan's concerts at a place called "The Paradise"

THE PHANTOM: "Never sing my music again! Not here, not anywhere! You understand? Never again. My music is for Pheonix, only she can sing it, anyone else that tries, dies!!!!"

Loading...
No similar edition of this title was found at TPL.

Try searching for Phantom of the Paradise to see if TPL owns related versions of the work.