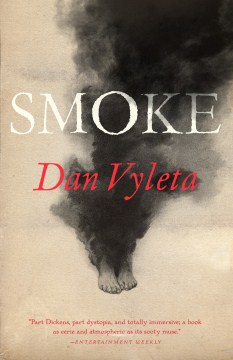 In an alternate England, where people who are wicked in thought or deed are marked by the Smoke that pours from their bodies, Thomas, Charlie, and Livia notice that some people appear to be able to lie without triggering Smoke. As they dig deeper, they discover teachers who have mysterious ties to warring political factions, a sumptuous estate which hides attic rooms and laboratories, revolutionaries who are fighting against a secret police force. They begin to suspect that everything they have been taught about Smoke is a lie; but if that is a lie, what else about their world is lies? What is their place in the struggle between faith and reason, between good and evil? And who can they trust?
Publisher: New York : Doubleday, [2016]
Edition: First edition
Copyright Date: ©2016
ISBN: 9780385540179
0385540175
9780385540162
0385540167

In an alternate and dystopian England, people smoke. As in they emit smoke from their bodies. Smoke is considered evidence of sin, but the wealthy and powerful have ways of minimizing it’s consequence. From the descriptions of the countryside to the cities to the homes of the rich and poor, Vyleta does a beautiful job of painting a picture, but it is a dark and uncomfortable one I didn’t want to stay in. The question that kept me reading is the same question the characters ask — what is smoke, really? The reader is not given a complete answer, and what is revealed only leads to more questions. I assume more will be answered in the next book, Soot, but I’m just not sure I want to revisit that world long enough to find out.

This book is dark, dark, dark. I persevered till the end, but found it a slog. An occasional reprieve from all the smoke, soot and blackness would have been welcome. One review stated the book read like young adult fiction. Got to agree.

Flipping page after page, devouring pretty words, precise and commanding. Sucked in by Daniel Vyleta's command of language, his descriptions, his metaphors, a voice that purrs like Dickens, HG Wells, Jules Verne. Reading, dozing, dreaming. Once I awake from being chased through the grimy streets of London with the three teen protagonists. Charlie, Thomas, and Livia. A love triangle. The story seeps inside me like the smoke. I want to stop, but I can't. It lulls like heroine. I must know it all, why it is how it is, how it ends...if it ends.

He hooks me on page one.

"There is movement all around the dormitory. Pale figures stretching, rising, whispering in groups. Haste wrestles with reluctance. There are only a handful of candles; moonlight on the snow outside the windows, their panes milky with its ghostly glow. Soon the boys move in procession out the twin doors. Nobody wants to be first, or last: not Charlie, not Thomas, not even the handful of boys who hold special favour. Best to be lost in the crowd."

This is no Hogwarts.

Smoke is a virus: the visible manifestation of vice. There was a time before smoke, in the 1600s, when a man could sin and his body would not betray him by issuing streams of smoke. But the soot breeds like germs and as the English conquer the world, they spread it like the plague, like blankets soaked in smallpox. Now smoke is an industry, managed by the grand families through "cigarettes and sweeties." And those looking for a cure are pursued and stopped. The upper classes do not smoke; at least, their sin is not visible like the peasants and the poor who litter London's streets. They mask it, control it, like everything else. Of course, they are morally superior and must appear that way. There is even a bill in parliament to close the borders and contain it, to banish foreigners: a frightful link to now.

Baron and Lady Naylor, Livia's parents, search for a cure, make it their life's work, use science, laboratories, and pure untainted innocents captured from distant parts of the globe. But is it a cure, they seek? Perhaps, it is something else?

Warning: Smoke is no romance novel. Smoke is Steampunk, that new indescribable genre that crosses science fiction and fantasy with settings in the 1800s and modern mechanics. There is a man who has changed his niece into a clockwork girl to control her morality, her smoking. When she feels sinful she winds the screws a little tighter and hardly smokes at all.

What do you think of it, this smoke? Is it blowing our way, a black noxious virus breeding somewhere in our immorality? Or is this merely Vyleta's crazed imagination seeking to explain what has been; or perhaps, warning us of what is to come?

In an alternate historical London, people who lie reveal themselves by giving off smoke but the rules of how this works are complicated.There are some people who can lie and not trigger any smoke and this lends an interesting element to the story. The rules we are given are changeable. The setting lends itself well to the story.The writing is descriptive, and the tone is atmospheric. Similar authors that come to my mind were Neil Gaiman and China Mieville. This is a dark, delicious tale.

Set in an alternate Victorian England, this novel introduces a world in which "sinful" thoughts and actions physically manifest on the body as Soot, thereby creating a class system based on moral purity. Best friends Charlie Cooper and Thomas Argyle are both enrolled at a boarding school established to rid pupils of their Soot-producing tendencies. Neither has ever questioned the system that rules their lives -- until unexpected events force them to challenge the status quo. Publishers Weekly calls this thought-provoking, intricately plotted novel "Dickensian in its imaginative scope and atmosphere."

In the very beginning, this book felt very Harry Potterish, but it soon took it's own unique path. It is well written and provides great atmospheric settings. This book may not be everyone's cup of tea but I ended up really enjoying it.This author impressed me and I plan to read more by him.

This has a fantastic and compelling concept. We're in 19th century England. People produce Smoke whenever they think or do something immoral, like committing violence or stealing something. The nobility do not smoke, the lower classes do, kids from rich families get sent to schools to learn how not to get soot and smoke everywhere. One kid at this school comes from a mysterious background and there are lots of ominous things about him and about the whole Smoking thing.

It does sound cool, no? It is. It is really, really fascinating for the first third of the novel and then the whole thing just grounds to a halt. The momentum stalls and the whole thing just becomes incredibly tedious. I still give it three stars because of the idea and how the world works but, honestly, this was rough going.