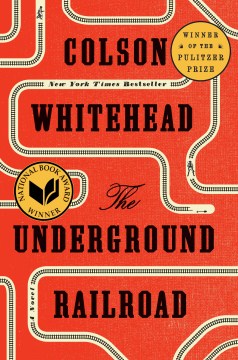 Cora is a slave on a cotton plantation in Georgia. When Caesar, a recent arrival from Virginia, tells her about the Underground Railroad, they decide to take a terrifying risk and escape. Though they manage to find a station and head north, they are being hunted. Their first stop is South Carolina, in a city that initially seems like a haven. But the city's placid surface masks an insidious scheme designed for its black denizens. And even worse: Ridgeway, the relentless slave catcher, is close on their heels.
Publisher: New York : Doubleday, [2016]
Edition: First edition
Copyright Date: ©2016
ISBN: 9780385542364
0385542364
9780345804327

Please join us on September 13th, 2017, at the Swasey Branch to discuss this month’s book club selection: The Underground Railroad (Fiction, 2016), by Colson Whitehead. Winner of the Pulitzer Prize and National Book Award, this novel chronicles the daring survival story of a cotton plantation slave in Georgia, who, after suffering at the hands of both her owners and fellow slaves, races thro… (more)

List - A book that is a modern classic, as part of the Extreme Reader Challenge

List - A book set in the South, as part of the Extreme Reader Challenge

Cora is a slave on a cotton plantation in Georgia. When Caesar, a recent arrival from Virginia, tells her about the Underground Railroad, they decide to take a terrifying risk and escape. Though they manage to find a station and head north, they are being hunted. Their first stop is South Carolin... Read More »

Did this one for a Book Club selection, my choice.
I like reading about the history of African American beginnings in this country, though I find it horrifying at the same time. Very conflicting, internally, for me! As a middle-schooler I remember watching Roots for the very first time and thinking our government should offer EVERY black person the option of being sent back to Africa to rejoin their families. I was maybe 10 years old at the time, so I had no concept of how complicated that would have been-it just seemed "logical" to my thinking. Such as, how each individual person could even know from which family line they even came from originally, since there were no birth records....etc.
Anyway, back to the book....
I knew the underground railroad was a walking route taken by fleeing slaves but this story includes an ACTUAL railroad which for a few seconds made me wonder if that could be true! Hahaha, and "gullible" isn't listed in the dictionary. I felt compassion for each character, even the older black males who ended up raping young black girls. I was at first so pissed at them for victimizing "their own people" but I've come to realize that the brutalization of the race was put upon them by the entirely of the slave system beginning from original capture to being traded by individual plantation owners for generations. ("owners") I can no longer be angry at the black males for brutalizing their sisters, but I AM still heartbroken for both.

This work of fiction is raw, gritty, and thought-provoking. It would be a great book club read to pair with non-fiction titles about the underground railroad and slavery.

This is an excellent, well written, and intense read! I fully understand why it won so many awards. I could feel the fears and terror of Cora. It reminded me of the some of the dangers of some of the attitudes of today and the dangers of not speaking out.

The author has said that he often begins a novel with the question "What if...?" What if the Underground Railroad consisted of actual trains on a track? (Whitehead's initial thought as a schoolboy when first learning of the U.R.) And what if each state the runaway slave passes through represents a different aspect and imagining of the American slave labor economy of the 1800s? Well, why not?

This is a work of fiction that is inspired by and grounded in history, with a dash of magical realism (think: trains!) Primarily told from the viewpoint of the runaway slave Cora, it also illuminates the philosophy and motivations of the plantation owners, the regulators and slave catchers, and the abolitionists, station masters, conductors and sympathizers, the freemen and Southern society in general.

Cora's journey is a rollercoaster of pain, violence, hope, despair and perseverance. The cruelty of the slave labor economy is painted in excruciating, heartbreaking detail. My previous understanding of the Underground Railroad was hopelessly naive, informed by a quaint, historically inaccurate oral tradition of coded quilts hung on split rail fences guiding the journeys of those fleeing the South. It was so much more, and readers of this Pulitzer award winner will be rewarded at the end with a wondrous explanation of the railroad metaphor. I promise this book will stay with you a long time.

This was the "it" book of 2016; I read Whitehead's Zone One and LOVED it; I'm a historical fiction fan -- all of this added up to enthusiasm and anticipation as I cracked The Underground Railroad open. I liked the first chapter - the backstory of Cora's grandmother - very much, so I was sure I was in for a great read. Then... disappointment after disappointment.
I think Whitehead threw in everything but the kitchen sink - and didn't earn it.
The writing was pedestrian.
I questioned the historical accuracy.
Undeveloped characters.
Why, why, why the focus on the slave catcher?
And I despised the magical realism of a real railroad rather than the historical, much more interesting true "railroad" of incredibly brave, resourceful, and brilliant people. Really hated that. Inexplicable. Stupid choice.

I hated this book. I know it's supposed to be wonderful, but the amount of gruesome and detailed violence in this novel was far too much for me. I was also not at all satisfied with Whitehead's take on the Underground Railroad. I've read many good books about slavery, but this was not one of them.

I was very disappointed in this book. Mixing fantasy (a literal, steel-rails-and-all railroad underground) with serious history (and what is more serious than slavery?) is very challenging and, for me, it did not work in this book. It felt like a dark, poorly thought out version of the Polar Express. This aspect of the story (and the Underground Railroad was described too concretely too many times and in too much detail to be mere metaphor) was unbelievable and so got in my way, jarringly, every time it came up- which was quite often. The author spares little detail of the heinous legacy and conditions of slavery but gives unconvincing relations (ie respect and care and conversation) between the notoriously sadistic slave catcher and the female protagonist. The development of the characters was unsatisfyingly and unprofessionally thin outside of that which was purely plot driven. I give this book two stars.

This story is fiction and it reflects reality. A tragic and violent history Jim Crow America. Whitehead masterfully takes the reader on a journey into the penal system for adolescent boys, both black and white in the 60’s in Florida. This story focuses on the realities of how black boys were treated. It is another sobering view of America and how we have a past we must understand to move into a future where Black Lives Matter. I recommend it!

It was worth waiting four months for The Underground Railroad to become available. Once I got it, I finished it in two or three days. Mable was kidnapped from Africa and taken to Georgia, where she was made to be a slave. She had a daughter, Cora, who is the main character of the book. Mable ran away, and was never heard from again, much to the sadness and anger of her young daughter Cora. The daily fears, indignities, and brutalities of life as a slave were described, as were the gamut of relationships among the slaves. Cora ran away, was caught, ran away again, let her guard down and was again caught, and again ran away. She was helped along the way by kind people of both races, some who accepted the danger they put themselves in and some who didn't but couldn't just do nothing. There was much, much sadness and I found myself hoping it was more fiction than historical fiction.

Cora is a young woman living on a cotton plantation in Georgia. Her mother had escaped years ago and Cora carries the feelings of abandonment and resentment with her still. Life is harsh for the slaves but particularly for Cora as she is ostracized even from her fellow Africans. When she is offered the chance to escape on the Underground Railroad, she initially refuses. It is only after a brutal beating from the plantation owner, and promises of more to come, that Cora takes the opportunity to escape via the Railroad. During the escape, a man is killed, and the bounty on her head grows exponentially. As she travels from state to state, Cora experiences new horrors and moves closer to the North while being pursued by the relentless slave catcher Ridgeway. Along Cora’s journey we meet abolitionists, opportunists, and hypocrites who all play a role in the road to freedom.

In this coming of age tale, author Colson Whitehead envisions the Underground Railroad not as a metaphor, but as a real underground train network with conductors and station agents. This does nothing to take away from the very human experiences Cora lives through in this alternative history tale.

This book functions as a meditation on slavery during pre-civil war America. Cora’s journey to freedom takes her to different states, which allows Whitehead to describe the many horrors of slavery. In one state, Cora is treated well and given lodgings and a job but there are dark secrets hidden beneath the shiny exterior. In subsequent states, we see various other terrors including hangings, corpse trails, and mobs. While Whitehead reimagines these into a single narrative, the experiences he describes did occur in America’s history and it’s important that they are remembered.

The characterization in this latest selection in Oprah’s book club is also excellent. The various characters are fully realized people with backgrounds and emotions. In this way, we as readers have larger insight into the slave owners and slave catchers and what their motivations were and how they played the roles that they did in history.

Author Colson Whitehead is a Pulitzer Prize finalist and bestselling author. He employs his skills to craft a page turner of an historical novel. The chapters mostly come from Cora’s perspective, but interspersed are chapters from the perspective of other characters. The result is a novel with enormous depth and lush descriptions while still being highly readable.

pg 52 "The southern white man was spat from the loins of the devil and there was no way to forecast his next evil act."
pg 116 "Truth was a changing display in a shop window, manipulated by hands when you weren't looking, alluring and ever out of reach."
pg 175 Donald thought....."Chattel slavery was an affront to God, and slavers an aspect of Satan."
pg 214 "Time enough for Cora to take stock of her journey from Randall and make a thick braid of her misfortunes."
pg 224 Ridgeway says..."You heard my name when you were a pickaninny...The name of punishment, dogging every fugitive step and every thought of running away."
pg 234 "One thing about the south, it was not patient when it came to killing negroes."

"Yet when his classmates put their blades to a colored cadaver, they did more for the cause of colored advancement than the most high-minded abolitionist. In death the negro became a human being. Only then was he the white man's equal." - page 139

"Slavery is a sin when whites were put to the yoke, but not the African. All men are created equal, unless we decide you are not a man." - page 182

latwell1 thinks this title is suitable for 14 years and over