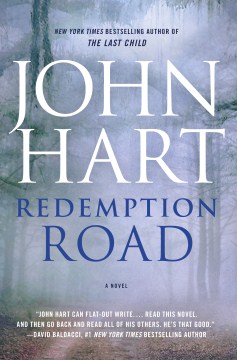 " Imagine: A boy with a gun waits for the man who killed his mother. A troubled detective confronts her past in the aftermath of a brutal shooting. After thirteen years in prison, a good cop walks free. But for how long? And deep in the forest, on the altar of an abandoned church, the unthinkable has just happened... This is a town on the brink. This is a road with no mercy."-- Provided by publisher.
Publisher: New York : Thomas Dunne Books, 2016
Edition: First edition
ISBN: 9780312380366
0312380364
9781250107046

Nothing says “must read” quite like a Librarian’s stamp of approval! Every month Librarians across the country vote for their favorite newly published books and LibraryReads.org (link to www.libraryreads.org) releases the top 10 picks for the month. Subscribe to Tacoma Library’s e-Newsletter  (link to Newsletter page) service and get the Library Reads picks and more delivered  straight to y… (more)

David Baldacci's review on the front cover of "Redemption Road" caused me to snag this book on my last trip to the library. Thank you, David!! This book was riveting and wonderfully well-written. The plot was just twisted enough to keep me on my toes but not so twisted that it defied a reality test. Sometimes a bit graphic so would not recommend for anyone under 18'ish. Great writer, great read!

This book was good: very meaty. I enjoyed it though I have to say I was getting tired of riding in the car on those endless roads back and forth and all around (phew). One other thing I noticed, (maybe I'm the only one) this was very much like Steven King's writing; plots and sub plots. John Hart writes in a very descriptive and vivid style. He drags you down and won't let you up until he is good and ready. I love finding a new author (like a gift) and so many of his books for my future reading!

This Southern-Gothic literary thriller was a slow-burn of a read for me. The pacing at the beginning as the multiple characters were introduced was dreadfully slow. With that said, I'm glad I stuck it out. Once I had sorted everyone out and author John Hart started to reveal just what was going on (and this is a story that contains not one, but two intriguing mysteries), I didn't want to put it down. I even thought about it when I wasn't reading. At the beginning I might not have been willing to try another book from Hart, but he won me over by the end and I will definitely be giving more of his books at try.

This was a well written mystery. The characters had depth, were human with all of the traits we expect humans to have. I liked how the story developed and how the various characters interacted. It took quite a while to figure out who the serial killer was and then to see who the heroine really was and where the story was going. I liked the end especially as it tied in all of the main characters and provided a lot of food for thought. I would classify this as a must read.

I was never really into thriller or mystery novels until this. But after I am just a fanatic about them. The ending will blow you AWAY. Like it was there all along but you would never have guessed. There are so many important themes in this book, and they were all so beautifully woven together. This is one of the books I will be sure I will never forget. It's great, awesome, a rollercoaster, heartfelt. I LOVE JOHN HART!!!! I read The Last Son but it wasn't as good as this. I look forward to reading more of him.

Hard for me to put it down. The writing style hard to beat. Recommend this book if you like on the edge thrillers and getting involved with the different characters.

Suspenseful, brutal and heart wrenching, I would definitely recommend this book to someone who liked thrillers. It was a little too dark for me with the violence and the dead bodies at times, but the writing style of Mr. Hart can't be beat. He weaved together multiple story lines and made all the characters believable and likeable. I enjoyed it immensely!

A good story, despite the fact that I figured out who the killer was in the 1st third of the book. I thought the story dragged on a bit long in a few places but I would still recommend it to those who like a thriller.

Cop Elizabeth Black is in trouble for killing two kidnapping suspects she tracked to a dark basement. Also, a cop she was once obsessed with is released from prison after 13 years for a murder she does not think he committed. When similar murders are committed and some disturbing facts trickle out about what happened in that dark basement Liz finds herself in a world of trouble. The strength of this novel is in its characters. Liz, Adrian, Gideon and Channing. A multitude of sins are committed in this novel and the road to redemption is long and hard but the characters we come to love will ultimately find that redemption by seeking out each other. A real winner, highly recommended.

I started off listening to the audiobook in the car but it grabbed me and I couldn't wait to keep going so I got the e-book. Loved it and will look for more by this author.

“In the Dark Ages, no one understood the things that made some people special, things like imagination or creativity or vision. People lived and died in the same small village. They had no idea why the sun rose or set or why winter came. They grubbed in the dirt and died young of disease. Every soul in that dark, difficult time faced the same limitations, every soul except a precious few who came rarely to the world and saw things differently, the poets and inventors, the artists and stonemasons. Regular folks didn’t understand people like that; they didn’t understand how a person could wake up one day and see the world differently. They thought it was a gift from God. Thus, the word inspiration. It means ‘breathed upon.’”
===
“That’s like using white to describe a full moon rising, or wet to capture the glory of the oceans. ..."

If time inside had taught him one thing, though, it’s what really mattered in life. What he’d lost. What he had left.
===
“He says the cracks in you are so deep God’s own light can’t find the bottom.”
===
She passed a place that used to be her favorite restaurant and saw a group of teenagers arguing on the street corner. There was more of that now, too: anger, discontent. Unemployment was twice the national average, and every year it got harder to pretend the best times weren’t in the past.
===
She looked about in an apologetic way, and from a distance he could sense the unhappiness born of bad boyfriends and a meaningless job. She hoped life would be more. He understood that in a way most men would not.
===
“I’d stick with what you’ve got.” “And what’s that?” She stopped at his desk. “A mortgage, kids. Thirty extra pounds and a wife of what, nine years?” “Ten.” “Well, there you go. A loving family, thick arteries, and twenty years to retirement.”

“Try to look at this like a cop. Okay?” “As opposed to what? An astronaut? A housewife?”
===
“Sometimes justice matters more than the law.” “That’s a dangerous way for a cop to look at things.” “System’s broken, Liz. You know it same as me.”
===
“Be careful with friendships,” he said. “Not all of them are free.”
===
The old man nodded as if he understood. “No sin in survival, son.”
===
The old man nodded. “As for what you suffered in this place, all that matters is survival.
===
“Money means nothing,” Eli said. “You understand what I’m saying? I’ve seen people pull twenty years in this place, then come back six months later on account of the dollars. In and out, like they don’t learn nothing. It’s only worth so much, the gold and dollars and shiny bits. It’s not worth your life or your joy or a day of your freedom. Sunshine. Fresh air. It’s enough.”

Yet, it was my wife, I think, who said it best. She stuck it out for two years, then told me that, even at seventy-two, she was too young to live with a dead man.
===
“We thought it the ultimate expression of a life well lived. Powerful friends. A job that mattered. Look at it now, emptiness and dust, all those exciting people dead or close to it.”
===
How could they not see that? But they didn’t. Occam’s razor. The obvious explanation. Whatever. The truth was a coal he wanted to puke from his chest.
===
“No mold, no mildew.” Channing closed her eyes and turned her face to the sun. “Nothing in the desert smells like a basement.”
===
She fit perfectly. Candy in a box.
===
“The law, as you may have surmised, is equal parts theater and reason. The finest scholars might struggle in court, while mediocre thinkers excel. Logic and flair, and leverage where appropriate, such are the makings of a trial attorney. ..."

“Weakness is not a sin, Robert. God built us all with special flaws and left us the challenge of addressing them. Facing the things that hurt us most is the real test...."
===
“It is in suffering that we are withdrawn from the sway of time and mere things, and find ourselves in the presence of profounder truth.”
===
Some people were blessed with the ability to forget bad things. Elizabeth lacked that particular skill, so if she chose to face the ugliness straight on, she could close her eyes and see the past with perfect clarity: the sounds, the slant of light, the way he moved. The memory was about after.
===
“Hello, sweetheart.” “Hi, Mom.” A hug died stillborn and awkward. One smelled of white wine and lotion, the other of jail.
===
it. He had to wear so many masks. They slipped on and off with such ease that he forgot at times who he really was. A good man. A bad one. Spreading his hands on the sink, he stared at the mirror until he found the right face staring back.

Factual but demonized:
“Sand tiger sharks have embryos that fight and die in the mother’s womb. Once they’re large enough, they go at each other right there in the tightness and the black. They tear each other apart until only one is left alive; and that’s the one that’s eventually born. Everyone else is eaten or left to rot. Brothers. Sisters. Even the eggs, if any are left.” He drove for another mile. “Does that sound like God to you? That savagery?”
===
Like her, he cared more for the future than the past, more for hope than anger.
===
... Don’t you see the horrible truth of it? I thought I’d done this selfish thing and gotten lucky. I thought it was providence.”
===
“I can tell you that the law is an ocean of darkness and truth, and that lawyers are but vessels on the surface. We may pull one rope or another, but it is the client, in the end, who charts the course.”