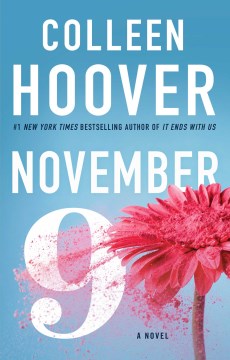 Fallon meets Ben, an aspiring novelist, the day before her scheduled cross-country move. They spend Fallon's last day in L.A. together, and her eventful life becomes the creative inspiration Ben has always sought for his novel. Amidst the various relationships and tribulations of their own separate lives they continue to meet on the same date every year. But has Ben has been telling her the truth... or fabricating a perfect reality for the sake of the ultimate plot twist?
Publisher: New York : Atria Books, 2015
Edition: First Atria Books trade paperback edition
ISBN: 9781501110344
1501110349

List - A love story, as part of the Extreme Reader Challenge

After reading Verity by Colleen Hoover, I decided to give her romance reads and try, and oh boy, I loved it. November 9 follows Fallon and Ben after Ben stands up to Fallon’s father’s rude remarks, on no other day than November 9th. They both felt it was immediate love when they first met but, had dreams they wanted to achieve on their own, honestly a very responsible decision. So, they decide that they will spend the next 5 years meeting up on November 9th with no communication in between. From what I’ve heard character writing is Hoover’s specialty and she really nailed it with these two. Let’s just say these characters are to die for. I will say as a romance goes there are some predictable bits, but the ending I could have NEVER SEEN COMING. If you are looking for something to warm your heart and ruin your expectations of love, definitely give this one a read!

I honestly didn’t see the hype around this book. Just ok.

I always enjoy this author's writing, characterizations, and unique plots, but this book wasn't a favorite. The angst drove this story for me and kept me reading, but it missed all romantic sparkle I usually enjoy CoHo in a book. Ben and Fallon started their romance at 18 and saw each other one day a year for a few hours. Had they been older, I might have bought into their romance and arrangement. With them being 18, I didn’t believe they could be as selfless as they were portrayed. Since I struggled to feel the romantic connection, I also didn’t get the swoon-worthy feels and goofy grins I normally associate with this author. It wasn’t a total miss, though. The angst kept me reading, as well as the author's trademark creativity. I was definitely surprised by some of the twists.

This was one of my favorite summer readings, its cheesy young love kind of deal but it reminded me of being 18. I love how the mom teaches her daughter between 18 - 23 years old, you need to love yourself first before loving someone else. I know there are a lot of people out there including myself who wished we loved ourselves first.

Bad library reviews .... "Cheese and drama overload and completely unrealistic" ... Thanks for the warnings. I pass.

absolutely problematic. why does this have 4.5 stars? don't read it! "i almost murdered someone but im hot, i have a dark part, and im a good kisser so thats okay right?" MISS COLLEEN HOOVER SAYS YES YALL!! plus everyone on goodreads and apparently here too SMH. colleen also says that manipulative relationship is cute and should be glorified❤️

Absolutely disliked this book. Could not finish it and had to read the spoilers that made be feel glad I had actually not finished it. Cheese and drama overload and completely unrealistic!

I love the fact that I see the authors name & just automatically know it's gonna blow me away... this one was no exception
Lots of love for CH, her books rock!!

I thought this book was a bit predictable, and the ending was brushed over too quickly. However, I still couldn't put it down and it was an exciting story with good character development.

*SPOILER ALERT!!!!!!!! IF YOU HAVEN'T READ THE BOOK, YOU MIGHT WANT TO SCROLL DOWN. I DON'T MEAN TO RUIN THE STORY, BUT THESE ARE MY FULLY HONEST OPINIONS ABOUT THE BOOK, AND I JUST WANTED TO BACK IT UP. PLEASE DON'T REPORT.*
I'd seen a lot of good ratings on this book all over, and I was 100% looking forward to this book.
But after reading just the first little bit, I knew it just wasn't for me. Usually, I can typically manage to force myself to love a book, but this one wasn't even willing to let me like it. The entire thing was a massive turn-off for me, and the two main characters were definitely not my thing. Fallon and Ben's personalities are so contradicting and fake.
When they first meet, Ben mentions Fallon's boobs and panties over and over and over again. This literally made me shudder and shiver. Like oh my god. Also, at the time that they make love, Ben says some things that made me sick to the stomach, and I'm not even exaggerating. Ben's humour was not enjoyable for me. AT ALL. He tries to be funny to entertain Fallon, but I was not swayed by him.
These two meet once a year, but they're seriously always tangled up in each other every time they meet. It's a little hard to imagine, mind you. And after their primary meeting, Ben's already undressing Fallon, and their instalove is SO UNIMAGINABLE. Like it's absolutely unreasonable.
(There's also a stereotype mentioned near the beginning about gay men, and reading into it just made me uncomfortable.)
In summary, the whole plot was just unbelievable, and WAY (and I mean WAY, WAY, WAY) too many coincidences occurred. Also, the plot twists were just too much. When I discovered that Ben had been the one causing all of Fallon's pain, it actually disgusted me. It's even suggested at one point (just slightly suggested, nothing major or obvious) that Ben didn't regret his actions of doing so. When Ben and his deceased brother's wife have a kid, it made me enraged that he just left them when Fallon came back. It might've just been me, but this man shows no responsibility and doesn't admit to his mistakes. His personality is just a complete turn off.
Seeing the compliments she's received, I thought Colleen Hoover wouldn't be a letdown, but this one really left me 100% disappointed. This is the first book I've ever read by her, and I'm not sure if I'm looking to read more. I made it into 84 pages, skimming the rest (which is actually a huge achievement for me in my opinion), and then I just had to toss the book away. ABSOLUTELY COULD NOT KEEP GOING. It made me cringe so hard on some quotes that were said (ESPECIALLY by Ben, oh my god, I could not take them AT ALL), and I'm so sorry, Colleen Hoover, but this is the first book I've given a half-star rating to. This just was not for me.

“Why would a girl care to find herself when she’ll never be able to make herself feel as good as a guy can?” we love a cute romance. 👇👇👇👇👇👇 wyd?? bye this book is problematic

"I would have never let anyone else borrow my heart if I knew there was a chance in hell you might want it back."
- Colleen Hoover

“Goals are achieved through discomfort and hard work. They aren’t achieved when you hide out in a place where you’re nice and cozy.”

“Whoever said the truth hurts was being an optimist. The truth is an excruciatingly painful son of a bitch.”

“It took four years for me to fall in love with him. It only took four pages to stop.”

“I would never let anyone else borrow my heart if I know there’s a chance in hell you might want it back.”

“I thought I was stronger than a word, but I just discovered that having to say goodbye to you is by far the hardest thing I’ve ever had to do.”

“If we’re going to kiss, it has to be book-worthy.”

“You can’t leave yet. I’m not finished falling in love with you.”

Sexual Content: Ben and Fallon are constantly kissing, making out, and have sex.

Violence: At one point, Ben gets injured by his brother Kyle and gets a swelling eye.

AysiaSukola thinks this title is suitable for 14 years and over

jmli thinks this title is suitable for 15 years and over

Fallon meets Ben, an aspiring novelist, the day before her scheduled cross-country move. Their untimely attraction leads them to spend Fallon's last day in L.A. together, and her eventful life becomes the creative inspiration Ben has always sought for his novel.

Over time and amidst the various relationships and tribulations of their own separate lives, they continue to meet on the same date every year.

Until one day Fallon becomes unsure if Ben has been telling her the truth or fabricating a perfect reality for the sake of the ultimate plot twist.