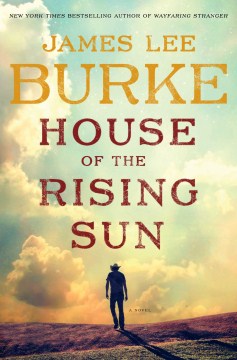 House of the Rising Sun

"After a violent encounter that leaves four Mexican soldiers dead, Hackberry escapes the country in possession of a stolen artifact, earning the ire of a bloodthirsty Austrian arms dealer who then places Hack's son Ishmael squarely in the cross hairs of a plot to recapture his prize, believed to be the mythic cup of Christ. Along the way, we meet three extraordinary women: Ruby Dansen, the Danish immigrant who is Ishmael's mother and Hackberry's one true love; Beatrice DeMolay, a brothel madam descended from the crusader knight who brought the shroud of Turin back from the Holy Land; and Maggie Bassett, one-time lover of the Sundance Kid, whose wiles rival those of Lady Macbeth. In her own way, each woman will aid Hackberry in his quest to reconcile with Ishmael, to vanquish their enemies, and to return the Grail to its rightful place" -- provided by publisher.
Publisher: New York : Simon & Schuster, 2015
Edition: First Simon & Schuster hardcover edition
Copyright Date: ©2015
ISBN: 9781501107108
1501107100
9781501107139
1501107135

Publisher's Weekly has released their picks for the best Mystery and Thrillers of 2015.  What was your favorite mystery or thriller? Dark Rooms The Decagon House Murders House of the Rising Sun Is Fat Bob Dead Yet? The Girl on the Train The Mulberry Bush Freedom's Child The Verdict The Cartel The Gates of Evangeline (more)

Excellent read (listen in my case). JLB has just got what it takes to deliver characters and drama intertwinede with mystery, tragedy, redemption, and fitting conclusions.

Hackberry is a very frustrating hero, never able to do the right thing when it should be done but knowing that it should be done. The story does present a different picture of the old West in transition. The use of the Holy Grail is an unnecessary sideline.

More greatness from James Lee Burke. Features Hackberry Holland, who has been the protagonist in a few other Burke books. I bought and read this in Montana where Burke lives.

just the 2nd Burke book I've read. But I am hooked now.

James lee Burke has been my favorite author for over twenty years. I'm surprised when I mention him to other serious readers that they are unfamiliar with his work. This novel was not my favorite,however,his prose always makes the journey more than worthwhile. It was a nice break from Dave and Cletus who must be worn out from all the action in their almost twilight years. I will continue to forward to anything he writes,including re-reading some along the way. His last book - Wayfaring Stranger - would be the book that I would recommend for newcomers.

Fine book. It seemed near the end at several times but stayed the course through the end. Worth the long read.

If you like other Burke's novels, which are not for everyone, you should enjoy this Hackberry saga thick with action in the late 1910's when the 6'8" big man fought one powerful arms dealer who had kidnapped his son for a ransom, with help from three extraordinary women. The clear message I got was characters of men/women were products of their past experiences. Can't argue with that. Burke has just turned 79 and still able to churn out his unique brand of southern old time prose that are a joy to chew on (see quotes.)

I liked the story, Texas, Mexico and history.

Favourite author least favourite novel by him. I have read everything Burke has written and loved it Not so in this case.

You’re a handsome woman, but half a dozen like you would have men taking vows of celibacy all over the Western Hemisphere.

The Huns are arming the Mexicans to stir up trouble so we keep our mind off Europe (1916.)
“Beckman is the most evil man I’ve ever known.” “All the bad ones seem that way until you punch their ticket.

Think anybody is interested in the history of a schoolteacher. But a reformed whore who still has her looks? Tell me men aren’t interested. Women, too, if they’re honest.

For Maggie, the word “restitution” was a misspelling of “retribution.” She did not believe in an eye for an eye, either; Maggie paid back with interest.

(Caught most typos but unlikely all.)
Mexico was not a country; it was a state of mind that never changed and was responsible for the blood on many a stone altar.

I jumped the broomstick with an Indian girl up on the Staked Plains when I was seventeen, I think …

The salt, the rain falling on the horizon, the fish roe in the seaweed, the fragrance of the land, and the coldness of the wind, the way it all comes together like it's part of a plan. It’s the first chapter in Genesis. It’s the smell of creation, Miss ruby. We’re part of it, too.

“You supper is ready.” ”I’m going into town for a little while.” “If you want to get drunk, do it here.” “I never drink in my home.” “That doesn’t make sense.” “Getting drunk doesn’t either. That’s why people get drunk. They cain’t make sense of anything, least of all themselves.” “Thanks for explaining that. I’ll throw your supper in the yard.”

… The populist movement, the stranglehold on the dollar by industrial interests, the theft of public lands by the railroads, anarchists throwing bombs, and company ginks shooting down strikers on picket lines.

I wouldn’t wish my father on my worst enem. If he gets sent to hell, I think the devil will quit his job.
You haven’t lived long enough. The dead don’t let go of the world. That’s why we put big stones on their graves. To hold them down.

He’s sewn goat testicles on impotent men. The ones who have survived his procedures don’t know whether to bleat or yodel.

“Who said you have to die to go to hell?” he said to himself. “I heard that,” she said. “Say it again and see what happens.”

Of the seven deadly sins, why was it he had to fall prey to the only one that had no trade-off? Unlike other sins, such as lust and gluttony and even sloth, jealousy brought no pleasure and instead, night and day, fed the fires of self-loathing and need and resentment of others.

“Know why a diamondback rattles?” “Because he’s fixing to strike you?” “That’s what stupid people think. He rates to let you know where he is so you won’t step on hm. If you don’t step on him, then he’s not required to bite you.”
“It’s not your fault, Hack. A leopard cannot change its spots …”
She could hold two contrary thoughts simultaneously with complete comfort. How many men could say that about their wives?

I’ve seen your handiwork. Flies are usually buzzing over it. Like a trademark.

The only thing any of us owns is six feet of dirt. You know who said that? Leo Tolstoy.

In every situation there was a winner and a loser. Those who pretended otherwise not only invited their fat but deserved it. Ask the animals whose heads ended up stuffed and stupid-looking on a den wall, while down below their killers shook the ice in their drinks and adjusted their scrotums and talked about the gas wells they were drilling in a pristine lake. Ask the Mexican girls who …

Do not be at the mercy of fate. Passivity and mediocrity ensure failure and belong on the same daisy chain. When challenge, there is no such thing as excess. Turn their viscera into a tangle of oily snakes. The Gospel according to Maggie Bassett.

You came out of the womb old. You walk around like every page in the Bible is glued on your clothes. One match and you’d go up in flames.

“Warn you about what?” “Morphine.” “That’s all bugaboo. It comes from a plant. It’s a gift of the earth.” “So is poison ivy.” “Don’t be clever. Cleverness is for people who have nothing to say.”

She … wondered how much blood had been mixed in the earth here, how many Indians and Spaniards and Mexicans and white colonists and missionaries were buried anonymously in these hills, voiceless, their stories untold, their deaths not worth an asterisk, their last thoughts known only to themselves.

You are on board the Pequod or not. But we’re going to kill the great white whale with or without you, …
WHO ARE YOUR FRIENDS? Hackberry wondered. The ones who will lend you money in times of need? Pull you from a range creek or a burning house? No, the real ones were the people who granted a favor simply because you asked it of them. There was no interrogation, no weighing of the scales, no equivocation. They backed your play. They were the kinds of friends you never let go of.

(snipe hunts in college beer keg parties ...)
“What’s a snipe hunt?” “It means you convince a fellow he can catch all the snipe he wants if he holds a flashlight in front of an open gunnysack by a barbed-wire fence between the hours of eleven and midnight.” “Who would be so stupid?” “It’s a metaphor. It means you confuse and mislead and mystify your enemy. Stonewall Jackson said that.”
Beckman is one cut above a man with a bone in his nose and a spear in his hand.
The rationalization was always the same: The Indians, particularly the Comanche, had committed atrocities against innocent farm families and missionaries or sometimes a lone trader whose wagon was loaded with pots and pans and machine-made-clothes and whiskey. But Hackberry always had the sense that the thundering charges upon the wickiups and the storm of bullets and the burning of the Indians’ food and blankets and buffalo robes were intended to be repeated until there was not one Indian left alive south of the Red River.

The law isn’t there for individuals. T’s there for people as a whole, or at least for chosen groups. Most of the time it serves the general good, but often at the expense of individuals. It’s the secret nobody talks about.
“I think that’s what we should try.” “That’s like starting a fire to put out a fire. Sometimes you end up with two fires.” “Desperate situations, desperate measures,” she replied. “Here’s another one: A bad idea is a bad idea.”

It's a fine day. Most days are. If a person can keep that in mind, every option is his.
The secret of Creation remained the secrets of Creation. A man’s worst experiences were not healed by time but waited for him like a dark cocoon breaking open when he closed his eyes at night. … But the greatest cheat, the one a person never got over, was betrayal by a friend and the subsequent loss of faith in one’s fellow man.

You’re nothing but trouble. You’re ignorant and uneducated and willful. You’re everything you disdain in others.
You never fail to distinguish yourself. I thought I had met every kind of man. I didn’t realize how vain I was.
Stop crying. I know you, Maggie. You could lie the paint off a battleship.

The desk clerk downstairs works for Beckman. So do some of the police officials. There is hardly anything in this city that Beckman doesn’t control. He also owns United States senators and congressmen and state attorneys and the wardens of penitentiaries.

What value was life if you surrendered your beliefs in order to sustain it> Make your choice, Holland, he told himself. Take the easy way, then see how you like living with it. He who dies this year is quit for the next, he thought.