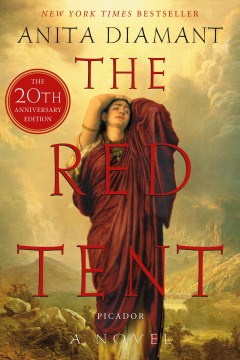 The story of Dinah, a tragic character from the Bible whose great love, a prince, is killed by her brother, leaving her alone and pregnant. The novel traces her life from childhood to death, in the process examining sexual and religious practices of the day, and what it meant to be a woman.
Publisher: New York : Picador USA, 1997
Edition: Book club edition
ISBN: 9780312427290
Branch Call Number: F DIAMA-A
Characteristics: 10 books (321 pages ; 21 cm.) + 1 binder, in bin (27 x 42 x 28 cm.)

This book was thoroughly surprising. While at first, it seems heavily biblical and ancient, the main character, Dinah's struggles are real and relatable throughout, coming to age in a changing environment and balancing age-old customs with new experiences and people. Moreover, the setting is highly immersive and easily invites any reader into the life of Dinah from birth to old age. Although the plot is slow-moving at first, the compelling characters are impossible to overlook and will easily entice anyone into the story.

A book club friend recommended it, and I picked it up. I have read "The Red Tent" without any substantial biblical knowledge, so I did not see those biblical references the author built Dinah's story upon. I read this book as a woman, a mother, a human being, and Dinah's story resonated with me as such. It was slow moving at first, as I struggled to remember everyone's names and relationships, but it quickly enveloped me with the moving story and through vivid descriptive detail. I would like to thank the friend for prompting that I take this journey, and Ms. Diamant for taking me on it.

An evocative re-imagaging. I read this at the recommendation of a Woman’s Hospital facilitator and have started to implement my own “red tent days” during PMS.

* i read this book to fulfil the goal read a book by an author with the same first or last name as you. it was also part of the challenge 300 books everyone should read once list featured on listopia. it is a work of biblical fiction. parts of it, i enjoyed very much. other parts made me feel uncomfortable. it was not written with a judeo christian perspective and yet it was not a bad book. on the contrary. it is not the type of biblical fiction that will enhance your studies of the scriptures however. it was kindof sad a different way of looking at the beloved charaters of jacob and rachel.

Beautiful piece of historical fiction! Diamant brings the world of Biblical women to life with such vibrancy and honesty. She doesn't shy away from hardship and the ugly details of life, but also celebrates the strength, knowledge, and accomplishments of Dinah and the women who form her sisterhood.

An exceptional book! Holds your interest right to the end.

Why is it so great?
1) Diamant is an amazing storyteller! The imagery is very rich.
2) Plenty of suspense to keep you turning pages
3) You don't have be religious to enjoy it.
4) It just is so, so good!
Recommended by Genn (the Pagemaster)

Judging by the amount of people I know who have read/started this book, who have suddenly appeared out of the woodwork once I mentioned I was reading it, I seem to be one of the last people on Earth who have heard about it. I also had no idea who Dinah was or her story (or rather lack thereof). So I basically went into this completely blind.

It took me a bit to like it but I can say that I did like it. I liked it a bit more once we got through the events prior to Dinah's birth but I was entranced just as much as Dinah herself was with the red tent and how the women were with each other in relation to the men. The men in the story may as well not be there and more often than not aren't portrayed in the best light but I can't blame that considering that it is Dinah telling the story and she has certainly not had a fair time by them.

I think my favourite part of the book is really just the way it's written. You definitely feel like she's sitting there telling you this story and everything just sort of flows naturally. Even the little asides of things she didn't do. It's really very rhythmic.

If you're a woman it will certainly strike a chord with you; whether that makes you keep reading or put the book down is another issue. I can definitely see why I was told it was one of those books that you wither love or you hate.

bidbid thinks this title is suitable for 16 years and over

Sarahd thinks this title is suitable for 16 years and over

DavidB thinks this title is suitable for 16 years and over

In the Book of Genesis the bible tells of Jacob and his twelve sons. This novel tells the story of Jacob's daughter Dinah and her mothers - Leah, Rachel, Zilpah, and Bilhah - the four wives of Jacob.

No one recalled my skill as a midwife, or the songs I sung, or the bred I baked for my insatiable brothers. Nothing remained except a few mangled details about those weeks in Shechem. There was far more to tell. Had I been asked to speak of it, I would have begun with the story of the generation that raised me, which is the only place to begin. If you want to understand any woman you must first ask about her mother and then listen carefully. Stories about food show a strong connection. Wistful silences demonstrate unfinished business. The more a daughter knows about the details of her mother’s life – without flinching or whining – the stronger the daughter.

We have been lost to each other for so long. My name means nothing to you. My memory is dust. This is not your fault or mine. The chain connecting mother to daughter was broken and the word passed to the keeping of men, who had no way of knowing. That is why I became a footnote, my story a brief detour between the well-known history of my Father, Jacob, and the celebrated chronicle of Joseph, my brother. On those rare occasions when I was remembered, it was as a victim. Near the beginning of your holy book, there is a passage that seems to say I was raped and continues with the bloody tale of how my honor was avenged. It’s a wonder that any mother ever called a daughter Dinah again. But some did. Maybe you guessed that there was more to me than the voiceless cipher in the text. Maybe you heard it in the music of my name: the first vowel high and clear, as when a mother calls to her child at dusk; the second sound soft, for whispering secrets on pillows. Dee-nah.