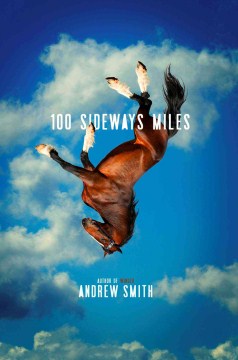 100 sideways miles is one of the more light hearted Andrew Smith books. That being said, it's also a novel that sits in the shadow of the other Smith novels. One thing that is unique to this novel, however, is the discussion on topics on mental instability/physical instability. It also talked about the idea of self and what it means to be an individual. This novel poses many questions that Smith's other novels do not, but that being said it's a short read that just didn't have as memorable of a story as Grasshopper Jungle or Winger did. That being said, I would completely recommend this novel to anyone!

My top read of 2014. Full of memorable characters and dialogue that made me laugh out loud. Andrew Smith is one of my new favourite authors and I'll be hunting out the rest of his books.

I'm enough of a detail-oriented bibliophile that I enjoy dwelling on parts of books like the acknowledgments. While all five paragraphs of this book's acknowledgments page are stellar, the fourth is best I can remember reading:

"Also, this book would never have been written if it weren't for the following: Sleeplessness, Self-Doubt, Depression, and Anxiety. So, thank you, demons. You guys are the greatest! I don't know what I would do without you!"

With such a perfect mix of honesty, vulnerability, voice, and sarcasm to kick things off, I was primed to fall in love before even starting the book.

That paragraph proved to be a good representation of what followed. This is a simple, honest slice of a fairly typical 17-year-old guy's life, including the sarcastic voice he uses to hide his vulnerability. It is not a particularly flashy story, and its power lies in the fact that it is so true to life and its characters so real.

Finn's story is a reflection of Finn.

Don't, though, take that to mean it is so mundane as to be boring. It may not have giant, planet-destroying insects, outrageous humor, or dystopian wastelands, but there is death, love, tragedy, heroism, and conflict enough to make for a dramatic story, it's just contained within the realm of normal teenage life and high jinks and shared from the perspective of an introspective, insecure young man trying to find his way in the world. Like Finn, it's thoughtfully engaging.

And, like Finn's best friend Cade, it has enough unusual elements--such as dead horses falling from the sky, ill-timed epileptic seizures, and fathers famous for their books about cannibalistic aliens that are mistaken for angels--to be irreverently entertaining.

I'm rating this immediately after having finished it, which is creating some conflict for me. Because the book tells a quieter story than many it's easier to set aside than my absolute favorites, making me lean toward 4 stars. Yet I suspect it will be one that sticks with me and feel more powerful as it lingers, as the best 5 star books do. So for know I'm going to go with 4.5 stars.

What a quirky, fun, strange novel! Andrew Smith is a fresh voice in teen literature. The writing is poetic, philosophical, and unique. Sixteen year old Finn is epileptic, has two different color eyes, and is possibly stuck in the sci-fi novel his dad wrote. Finn tries to understand love and how to make his own destiny, all with the help of his memorable best friend.

"Finn is used to people thinking he's a freak. First, his mother was killed in a bizarre accident involving a dead horse. Then his dad turned Finn into a character in his novel, which became a cult favorite. At least Finn's best friend Cade (a foul-mouthed, sex-crazed prankster) treats him like a real person. So does Julia, the fascinating new girl who's able to see beyond Finn's epileptic seizures and unusual habit of measuring time in miles. Even though 100 Sideways Miles features ghosts, a flash flood, and a wild road trip, it's the complex and satisfyingly weird characters that really make it a memorable read. If you're an outside-the-box reader looking for more edgy, absurd stories, try Libba Bray's Going Bovine." Teen Scene October 2014 newsletter http://www.libraryaware.com/996/NewsletterIssues/ViewIssue/72d88d46-49e9-4a07-ad0b-f8f2b75baf8a?postId=8719229c-6f71-45f8-b49d-2264d7fb6d8b

Andrew Smith is one of these most unique writers I have had the privilege to read. His books are always ambitious, if not enjoyable, and original. This book seems quieter than the rest, but slowly builds into a powerful punch. When you close the last page of this book you will to start all over at the beginning as you refuse to say goodbye to the charming Finn Easton.

Finn Easton is like any other epileptic teenage boy with a famous author for a father who had a horse fall on him, break his back and kill his mother. Which is to say that Finn Easton is like no one you have ever met. The eerie resemblance between himself and the main character of his father’s best-selling book, has left Finn wondering if he is even real. Measuring time by the miles traveled by earth’s rotation, Finn has a different way of looking at things than anyone around him. Finn’s senior year brings opportunities to visit broken dams, see the world outside of California, kiss a girl, go on a road trip and escape his father’s book.

This book would never have been written if it weren't for the following: Sleeplessness, Self-Doubt, Depression, and Anxiety. So, thank you, demons. You guys are the greatest! I don't know what I would do without you!