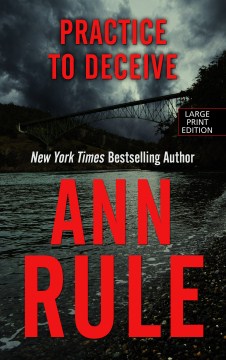 Nestled in Puget Sound, Whidbey Island is a gem of the Pacific Northwest; accessible only by ferry and the soaring Deception Pass Bridge, it is known for its artistic communties and stunning natural beauty. Life there is low-key, insular, and the island's year-round residents tend to know one another's business. But when the blood-drenched body of Russel Douglas was discovered the day after Chrismtas in his SUV in a hidden driveway near Whidbey's most exclusive mansions, the whole island was shocked. A single bullet between his eyes was the cause of death, but no one could imagine who among them could plot such a devious, cold-blooded crime. But when they found no gun in or near the SUV, Russel's manner of death became homicide.
Publisher: Waterville, Maine : Thorndike Press, A part of Gale, Cengage Learning, 2014
Edition: Large print edition
Copyright Date: 2014, ©2013
©2013

THIS STORY OF MURDER has as many facets as an intricately cut diamond, far too many to seem believable as either fiction or nonfiction. Either way, as the bizarre scenarios blaze a path through encounters between people who would not be expected to know one another, this saga might well seem contrived. As nonfiction — which it is — it is a murky sea of reality with myriad characters who seem larger than life. They are infinitely different from one another in personalities, lifestyles, and possible motivations.
===
The denouement of this baffling case took a decade. The entire story traverses fifty years. Even now, there are shadowy corners where secrets still hide. Many innocents have died violent deaths in unlikely places. Over time, the motives behind why these particular human beings were singled out for death are more obscure.

The sprawling Whidbey Island Naval Air Station is in the town of Oak Harbor at the northern tip of the forty-seven-mile-long island. It is the premier naval aviation installation in the Pacific Northwest and the location of all electronic attack squadrons flying the EA-6B Prowler and the EA-18G Growler. It is also home to four P-3 Orion Maritime Patrol squadrons and two Fleet Reconnaissance squadrons that fly the EP-3E Aries.
===
Many of the residences are getaway retreats for people who live in Seattle, Everett, or Bellingham, Washington — or even in Vancouver, British Columbia. Since many of the places are vacant during the winter months, neighbors who are full-time residents keep an eye out for strangers or any sign of suspicious activity.

…the holiday season is depressing for many people, and anyone who staffs crisis lines or works in public safety knows that suicides peak around Christmas and New Year’s.
===
Experienced detectives know that the manner of death should be viewed first as homicide, second as suicide, then accidental, natural, and finally, as undetermined.
===
As they left, one of Brenna’s friends asked if she should bring an attorney with her for the next day’s interview. “That’s up to her,” Birchfield answered. This was the beginning of one of the most challenging investigations the Island County Sheriff’s Office and the Island County Prosecuting Attorney’s Office had ever faced. It was not what it seemed to be; just when they pieced together part of the deadly foundation of a murder case, it would tear loose of another section. Their probe would involve Oregon, Idaho, Nevada, New Mexico, Florida, Texas, Alaska, and Mexico. And it would take years.

THE ONE PERSON A homicide investigator needs to interview the most is forever out of reach. The victim can no longer speak, and yet superior detectives find ways to know that person more thoroughly than anyone they know in life. They must weigh everything they learn about the dead, balancing what one witness says against what other witnesses assure them is the truth. At times, when the victim has lived an uncomplicated life, that can be a fairly simple exercise.
===
“He was a grown man and he was still complaining that he had a miserable childhood. He felt he had missed out on so much in his life, and he looked for someone he could hold responsible.”

Jimmie bought a split-level house for his brood on Ruskin Drive in the Berryessa neighborhood in San Jose. There were plenty of bedrooms and a green sweep of grass where the Stackhouse children could play.
===
Then she lifted her arms as if she was holding a gun and pointed and said, ‘You’d better remember that or I’ll come back and go 007 on you!’
===
Beyond losing their very lives, homicide victims lose their privacy. Their hopes, dreams, flaws, sins, accomplishments — everything — become public knowledge. In a sense, their very innards are spread out for public viewing to be picked over, criticized, and exploited. The media does that, of course, and detectives have to explore every facet of the dead person’s life if they hope to find who might have had a motive, opportunity, or means to destroy him — or her.

‘Have you ever thought — when you were working with your friend — Peggy Sue — that Russ was worth more dead to you than alive?’ ” Peggy Sue Thomas often worked at Just B’s as a hairdresser; she was Brenna’s landlady, and the two were close friends.
===
Russ had no mortgage payments; the house in Langley where Brenna and their children lived was rented from a woman named Peggy Sue Thomas. Peggy had worked for Brenna at Just B’s Beauty Salon for a while, but she had moved away from Whidbey Island sometime before, and the house was up for sale.
===
“Well, once he came to work in a kilt, and another time he wore a kind of sarong — maybe you’d call it a long loincloth. We’re casual here — but not that casual. I took him aside and explained to him that basically we’re employed by Nextel, and they’re right next door. We have to dress the way Nextel staff dresses.
===
How humans react to profoundly bad news isn’t predictable.

“I did not. I did not see a gun,” she said firmly. “I may have seen a pouch with a gun in it in February of this year.”
===
Stackhouse was stationed at the Naval Air Station at Moffett Field in Mountain View, California, thirty-five miles south of San Francisco, a short distance northwest of San Jose, and only a mile from San Francisco Bay. Moffett Field has a long and rich history going back to 1931, with huge wooden hangars that once housed dirigibles (blimps like the ill-fated Hindenburg, which crashed and burned in Lakehurst, New Jersey, in 1937). Later Moffett provided space for fighter jets. The naval facility was decommissioned in 1994, and both NASA and private corporations now occupy the fifteen hundred acres there.

They were a handsome family. Jimmie was a big, rugged man with wavy, red-blond hair that he combed into an imposing pompadour. Thirty-year-old Mary Ellen was a tall, slender brunette who was attractive enough to be a model.
===
“It took years to forgive my dad for the hell us kids went through and his part in brushing it all away without really investigating if his children were okay. It was right there in front of him that we were not, but I don’t fault him. He coped the way he knew how.”
===
Jimmie retired from the service as a Master Chief when he was thirty-nine and relocated to his former home state of Idaho in 1973.
===
“Women have to know it’s okay to do things out of the norm,” she told the judges. “They should set an example for their children. [That is] the greatest ethical challenge facing women today with all the violence, sex, and drugs in the media.”

Most sociopathic boys act out by the time they are five, usually by torturing animals or setting fires. Whether Gilbert would have been treatable at the age of eight, no one can say. It might well have been too late. But at least someone would have noticed a burgeoning social predator. His parents had felt that he “was just going through a stage” in his early attacks. Moreover, they couldn’t begin to afford the twenty-five dollars an hour that was the going rate for psychiatric treatment in the fifties and sixties.
===
Butter wouldn’t melt in her mouth as she presented herself to the Langley community as a long-suffering stepmother who was doing her best to raise six children who weren’t even hers. Some people saw her as heroic; others were suspicious of her saintly persona.

But, hell, I liked her. Then she started telling me how to take care of horses!
===

“Hell, she didn’t know which end of a horse to put the bridle on!”
===
“She had everything she’d always wanted: money, a good man who loved her, fabulous vacations, a husband who was kind and generous to her daughters and parents, anything she wanted. But she still complained.”
===
In the fall of 2008, Russel Douglas’s murder was now almost five years in the past, and once her fight with Vickie sputtered to an end, Peggy Sue didn’t seem outwardly concerned about the continuing investigation far away on Whidbey Island.
===
In the spring of 2009, Mark’s horse Mine That Bird won the Kentucky Derby — and was headed for the Triple Crown. Bird’s winning run was the second-largest upset in the 185-year history of the Kentucky Derby!

Surprised to learn that Ann Rule's birth name was Ann Rae Stackhouse, same last name as one of the major characters (Peggy Sue Stackhouse) in this murder case that Ann personally had followed during the 2011 to 2013 trials. The main case is not exactly unusual but the 1963 murder case "on Ruskin Drive in the Berryessa neighborhood in San Jose" CA is hauntingly horrific. Besides "Lying in Wait and Other True Cases: Ann Rule's Crime Files: Vol. 17' (2014)", this is the last true crime novel that Rule (October 22, 1931 – July 26, 2015) had published.

Not one of her better books. Story was fairly drab. No suspense. Then with the other crimes she weaved into the story that really didn't have any relevance to the main one.

A good piece of non fiction. Who killed a man in his truck on a sparsely populated road? A relentless police detective spent 10 years investigating and bringing to trial the murderer.