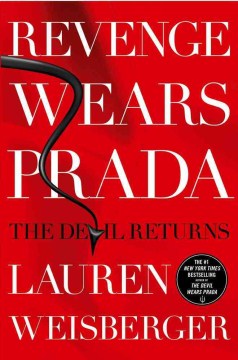 A sequel to "The Devil Wears Prada" finds Andy Sachs and her partner, Emily, blossoming throughout eight years at the head of a wildly successful high fashion bridal magazine only to be haunted by memories of their former boss on the eve of Andy's wedding.
Publisher: New York : Simon & Schuster, 2013
ISBN: 9781439136638
1439136637

After finishing this book, my thoughts were as follows: WTH is wrong with Andy? Is this a book about the slow, cruel, dissolving of a woman's mind?
First, let's get started on the letter. Like, okay, your mother in law isn't your biggest fan. (I can't imagine why). Oh no, she wants your fiancee to marry another. Who he apparently ran into- accidentally- a few months ago. Someone alert the media, call the cops, cue the music, because this just got soooo terrible and sooooo hard for Andy. Like, A) obviously he wants YOU, because he wouldn't have PROPOSED to you. And, B) Do you really expect him to tell you about every single girl he sees- SEES - every single second of his life? So, he saw a girl, chatted with her for about two seconds, and then left. WTH is wrong with that?

And then it's like: ooooh, wooooee is ME I'm not feeling too good, let me reminisce..... oh, oops, I'm pregnant. This is SO sad. I hate the fact that my husband is hot, wealthy, kind, loving, and funny. Like, honestly, my life is so hard. I can't stand it.....

And then the whole bridal thing, and the whole trauma thing..... God! That is what I can't stand. Okay, so your boss was a leeetttle bit demanding in her Starbucks orders and was kind of incredibly tough on you, but SO WHAT. TOUGH COOKIES. I guess it's the author's attempt to kind of revive the (flagging) spirit of the whole 'devil boss' thing, as well as make Andy COOL and INTERESTING and NOT LIKE OTHER GUURLS, but it does not work.
And then, can we talk about the writing? It is possible to write an actually GOOD bubbly, fun, read. This is not written well. The writing is terrible. (If you want to read well-written bubbly books, read Confessions Of a Shopaholic, or The Little Lady Agency) It's almost as bad as Crazy Rich Asians- yes, I said it, the writing there is AWFUL - and, what's worse, the character are basically the same, too. Not that she copied CRA, but it just seems like all of these terribly-written books all stick to the same tried-and-terrible format, character-wise.

Ex.) Rachel/Andy is PRETTY, approachable, NORMAL (because the guy is some mega rich guy, and all he's looking for is SOMEONE NORMAL but at the same time NOT LIKE OTHER GIRLS), loves FOOD (which shows that while she is INCREDIBLY BEAUTIFUL, she isn't some stick-thin, shallow, supermodel), has a sense of HUMOR, has raging insecurities about the guy, and is KIND. Because omigod, like, #relatable!

Nick/Max is funny, WARM, supportive, SUPER-LOVING, BECAUSE RACHEL/ANDY IS THE LOVE OF HIS LIFE, sweet, thoughtful, RICH, did I mention RICH, wealthy, has money, is successful, has money, is wealthy, $$$$$, and has a terrible mother who does not approve of their relationship, yadda yadda.
Basically, they're both perfect. Now, the author tries to make them perfectly IMperfect, with the 'I love food' thing and the 'ooh, I have insecurities' thing. (Oh, but the guy has to be perfect, sorry)
Some better book recommendations are: The Royal We (funniest book you'll ever read, some great characters, an absolutely rip-roaring book), Confessions Of A Shopaholic (well-written), The Little Lady Agency (extremely well-written, realistic and beautiful relationships).

God, just don't even try to read this book, its's beyond horrendous. I regret every second of my life spent reading it.

A great continuation of the famous ‘The Devil Wears Prada’ book! It captured every moment of Andy’s life after leaving Miranda’s demanding job, showcasing her marriage life with many ups and downs. Certainly, the first book was better than this one, but it’s a fun past-time read. In my opinion, the ending could have much better, much happier and more intriguing overall. There could have been many plot changes, but in the end, this book was an enjoyable read and I suggest this book to anyone familiar with the ‘Devil Wears Prada’ series. I’m now looking forward to reading more of Lauren Weisberger’s delicious reads! 3.5/5. @AleenAther of the Hamilton Public Library Teen Review Board

I am just over halfway and this book sucks balls. The first book is a work of art compared to this! Where is the action? It starts off wonderfully with Andy finding a letter from her future mother-in-law discouraging her son from marrying her then, Andy becoming mysteriously ill! It looks as if its off to a running start...then, what? I guess I should finish it. I keep expecting ACTION to take place but no...it is like another person entirely wrote this sequel.

At least there is a happy ending!

What was that?!!! Basically I think the only part that sort of stayed "true" to the original, was the ending where Andy actually writes for a legitimate paper, instead of a FASHION magazine!

OMG, this book in it's entirety was ridiculous! Pretty much everyone seemed so out of character compared to the first book. Yes I understand that 10 years has passed and people change, but there is no way that is Emily or Andy! Was Andy ever so paranoid and un-trusting of Alex? No! But why does she do that with Max, her pretty much perfect boyfriend/husband?!

So we start off with Andy waiting to get married, only to find a letter written by her future MIL in regards to Andy not being the "perfect fit" to Max and Max running into his former and "perfect" ex. Next thing you know, a million crazy things is running through Andy's mind, from wanting to run from her wedding to throwing up. Yeah total bombshell.... even when she asks Max about it later on, she still doesn't believe or trust him (poor guy). And oh yeah she totally thinks she got STD from Max, when he supposedly cheated with the ex, yeah totally can't be the other possible reason (like maybe being pregnant???)

Her and Emily with their magazine The Plunge .... I feel conflicted. After what happened at Runway, I would have thought Andy would have nothing to do with fashion magazines in that sense.... it's just weird!

And the whole revenge thing by Miranda, it feels all like it was built up in Andy's mind! And this supposed revenge just keeps dragging on and on and on....like where is the intensity and hatred that we are left to believe Miranda will unleash on them?! This so called "revenge" was a total let down and boring! It took too long and nothing really unexpected happened. Snooze!

Basically, don't waste your time with this book. It is not worth it AT ALL!

Overly sappy & uncharismatic. Stick with the original, cause this sequel sucks....

The book starts off solid, but the main premise (the devil returns) is drawn out far too long. The bulk of the book takes place over the course of 3 months or so, and it honestly seems we have to live every one of those days, and the monotony of Andy's fears.

A patron review from the Adult Summer Reading Game: "After reading some amazing books this summer, this was just okay. Andy is back and has reinvented herself as a successful creator of a new magazine, but her old boss is trying to purchase the magazine, which will make Andy's life torturous."

Bob's wife says: As others have stated the title is incredibly misleading and the book itself is incredibly boring. Andy moves from one self-invented crises to the next and none of them are all that compelling. Oh no, my mother-in-law wrote a mean letter about me! Oh no, I'm pregnant while being married to a wealthy supportive man! Oh no, my old boss wants to give me millions of dollars for my magazine! If you want to read it, skip straight to page 300 where things finally start to pick-up beyond accounts of Andy's daily routine and of course her angst over become a millionaire in her own right.

Highly enjoyed reading this book! Probably not as good as The Devil Wears Prada but it was a fun read.

I expected the sequel to "The Devil Wears Prada" to be full of high drama, high fashion, high heels, and, of course, a larger-than-life Miranda Priestly. Majorly disappointed on all counts. The first 300 pages are boring, syrupy, sentimental, useless filler. This book did not deliver.