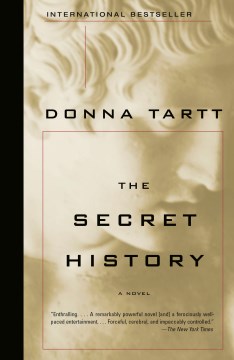 Richard Papen had never been to New England before his nineteenth year. Then he arrived at Hampeden College and quickly became seduced by the sweet, dark rhythms of campus life -- in particular by an elite group of five students, Greek scholars, worldly, self-assured, and at first glance, highly unapproachable.
Publisher: New York : Vintage Contemporaries, 1992
Edition: Book club ed
ISBN: 9781400031702
1400031702

Having read The Goldfinch before reading this one, I was less impressed than I might have been if I'd read this first. Does that make sense?

The protagonists of both books have too much in common—middle-class young man thrown into an upper-class peer group, obsession with a high-brow subject (Greek vs. art), crime, drug use, etc.

With that said, it was still an interesting read, and Tartt's prose is exceptional. Unfortunately, I never cared very much about any of the characters and found the basic plot a bit too unbelievable.

All consuming. This book will leave you exhausted and fulfilled. Characters that you feel you know. Epic novel. Must read Donna Tartt.

this has been my favorite book for over 20 years: my desert island book.
every time I read it, through many stages of life, it's kept revealing fresh insights and reflections.

The Secret History had a lot of hype and I was intrigued to get into it. It is, by no means, a small book. It took me longer then usual to finish and is packed with Greek references and vocabulary that I certainly was not familiar with.

The book is a thriller, mystery novel, and Donna Tartt so perfectly describes a pretentious, elite group who edge the line of eccentric and evil. The book is written very romantically, and while many dark themes such as drug/alcohol abuse, murder and incest are present, the book almost sidelines them and focuses on candlelit dinners, weekend getaways to gorgeous country home and intellectual discussions regarding Greek and Roman themes. And I loved it.

I think despite it not being a fantasy, it definitely felt like a fantasy which was very cool.

[*spoilers*]
I see many people argue that the characters are impossible to relate with and that is very true. All the characters are really bad people. But that makes it that much more interesting and exciting to read, because I found myself almost sympathizing with these awful, self-absorbed characters.

I think the best realization I had during this book was that Richard wasn’t at all a reliable narrator and that these characters being discussed were so much more worse then we expected.

Arguably, it’s not a perfect book and I realize that, but I enjoy the depth and I think I could reread this book a few more times and end on completely new conclusions about the characters and the story.

I read this book to fulfil the goal read a dark achedemia book. It was kindof creepy in a non scary way. I still don't completely understand it, but that's a good thing i think. it was entertaining. (it is also on the list of 300 books everyone should read once list featured on listopia.

My favorite book of 2020. Suspenseful, intelligent. quirky. Lord of the Flies with college students without the dread and bullying. A period piece from the eighties.

I loved this book and their characters. Have a good read.

I thought that the narrator was the wrong choice for this audiobook and I found it so distracting that I decided to abandon it and read the book instead.

Boring. I didn't much care for the writing style, and couldn't bring myself to care about any of the characters, so I abandoned it early.

I felt transported into a world that was not overtly familiar to me but covertly, it hit the spot. It was like a 5 course meal that you savor, looking forward to tasting more depth of all sorts. Fantastic emotional studies.

actually they're studying ancient Greek, and their social bond is a sense of superiority over the other students as well as local working-class people, and they do horrible things over the course of 1 school year, told from point of view of an incoming freshman who pretends to be rich like them because he admires their inhumane snobbery and is bored and ashamed of his own background.

Six college friends become more closely connected through their secluded study of Latin, but all they believed to be true about one another and their intentions crumbles when a series of unpredictable events spirals out of control.

Forgive me, for all the things I did but mostly for the ones that I did not.

"Bunny had been dead for several weeks before we came to understand the gravity of our situation."

VV12 thinks this title is suitable for 13 years and over