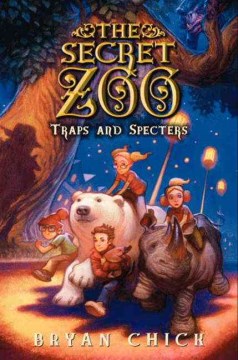 "On Halloween night, the scouts, along with their Descender allies, must battle terrifying sasquatches at their own elementary school. Little do they know, the sasquatches are merely the bait to a trap. DeGraff captures three of the Descenders and drags them into a frightening, off-limits sector of The Secret Zoo. Meanwhile, Noah and his friends must protect two of their animals allies from police officers who are convinced that they are dangerous animals on the rampage. Will the scouts be able to save their friends in time, both animal and human?"-- Provided by publisher.
Publisher: New York : Greenwillow Books, an imprint of HarperCollinsPublishers, [2012]
Edition: First edition
ISBN: 9780062192226
0062192221

navy_butterfly_508 thinks this title is suitable for 11 years and over

Noah, his sister Megan, and their best friends, Richie and Ella, live next door to the zoo. Megan is the first to notice the puzzling behavior of some of the animals. One day Megan disappears, and her brother and their friends realize it's up to them to find her. Their only choice is to follow a series of clues and sneak into the zoo. But once inside, will they discover there's much more to the Clarksville City Zoo than they could ever have guessed?

In this book there is a girl, who was going to piano lessons three weeks ago, she stepped off the porch and walked down the street and disappeared. After she disappeared her brother Noah tried figuring out how she disappeared. Noah's sisters name is Megan. Noah got some notes about his sister and how she was noticing things when she disappeared those notes were from animals. After school he went to the same place where his sister disappeared. After reading a note he knew he needed his club to figure out what the note was saying and now the notes are getting weird. Noah and his friends found another note from a polar bear named Blizzard. When the kids school ended they read the note and it said something happened when the zoo was closing. When the zoo was closing the three kids hid somewhere in the zoo. They got caught by a security guard. One of the security guard told Noah to check his mailbox at midnight. At 12:05 am Noah checked his mailbox nothing he waited then he saw a loose cheetah with a pouch. Noah opened the pouch and found a note and a key. He read the note and it said about using the key to open the zoo and go to where the penguins are. Ella tried to call Noah but Noah went to far. Ella went to Richie her friend to get some help. When Ella and Richie were going to the zoo Ella Noah`s friend said we could get in by climbing a tree and jump over the wall. When they got in they landed where the rhino are. When Noah reached the place where the penguins are he got in the tank and the biggest penguin took Noah to a secret cave.