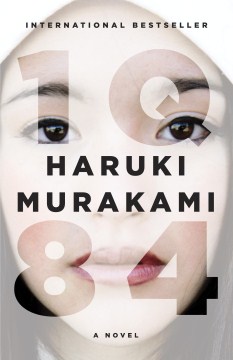 An ode to George Orwell's "1984" told in alternating male and female voices relates the stories of Aomame, an assassin for a secret organization who discovers that she has been transported to an alternate reality, and Tengo, a mathematics lecturer and novice writer.
Publisher: New York : Alfred A. Knopf, 2011
Edition: 1st ed
ISBN: 9780307957023
0307957020

I have been reading Murakami for several years now and I love that his novels are getting longer and longer. I crave more of his stories. The detail makes it all seem real and yet not real at the same time. 1Q84 is just enough surreal that you know it is not this universe; and yet you can't help but wonder if the events actually took place.

Very much like a Stephen King novel. Starts off in the normal, everyday world and quickly changes into another world. You follow along as the characters are trying to figure out what's happened/happening.

So this was my second read through of this book and it was just as weird and bizarre as I remembered if not more so. There is something about Murakami's writing that has a magnetism to it and no other writer quite hits the same way making him one of the most unique writers I've ever come across. Every time I open one of his books I never know the direction he's going to go and its really refreshing as a reader.

1Q84 is somewhat unique to Murakami's writing because he equally splits time with two characters and one character is indeed female which kind of goes outside of his typical style. Aoname and Tengo are the most normal characters in the book and the main focus but even they are on a weird adventure to find one another. I'm not sure if this book counts as a love story because the main characters haven't seen each other in 20 years and since they were children and don't see each other for most of the duration of the novel. Either way if you think you know where this novel is going I guarantee you that you are wrong.

At its core, it is;a superb love story, fantastical, excellent writing. really, really long but gripping. I gave it a 5 out of 5 rating.

A lively story telling, I enjoyed the cultural references and means of telling a story. Intrigued by the parallels of the parallels that might be drawn from this book. It was a good read.

This book is a slow read for sure, but Murakami books are hardly known for their edge of the seat suspense. 1Q84 provides a unique insight in the lives of an author, her ghost writer and an assassin - unbelievable plot lines and shifting narratives, but I guess that adds to the mystery. When the world around us makes no sense anymore, this book urges you to escape into another fantastical reality, equally implausible as ours is.

This was a Corte Madera 'staff pick' which I found to be fascinating in spite of its 1154 page length. I would have given it 5 stars were it to have ended differently.

Haruki is a master craftsman when it comes to characters, plot, fantasy and genre and 1Q84 is unique in all areas. For the most part characters are emotionally challenged, a quality not typically experienced in a love story. The pacing is well done and use of character's 'thoughts' immerse the reader deeper into their world. Creatively, the story stands alone when it comes to suspense, characterization, sci-fi/fantasy and romance, which are woven into the plot with great precision. Unlike others who've commented, I was engaged from start to end which is more than I can say for others I've encountered. Regardless, if you seek something well written, unique and immersive, invest the time; you won't be sorry!

You might notice views vary widely on this novel. It is paced differently than a western novel, even given it being originally published as three books. The first 400 pages were totally suspenceful. At times the heightened suspence made me want to skip to the end of chapters, and I was always glad I didn't because the resolutions were never quite what I expected. I have only read one other novel that made me want to do this. Then about half way through this long novel, it settles into a kind of people in hiding and spy versus spy. In the meantime, there is a very mysterious fantasy based on a book published in this story. We then have another switch to a kind of sweet romance. I find it interesting that while many readers challenge the believability of this ending, no one blinks an eye at a woman who has created the art of perfect homicides. If you want one of those old-fasioned, tie-all-loose-ends-together books, you won't find it here. But if you like wild rides that allow you to have a look into other worlds, real and/or otherwise, you will find it here. As Murakami tells us in the novel: "It is not that the meaning cannot be explained. But there are certain meanings that are lost forever the moment they are explained in words."(466) One last note, a musical one, your reading will be enhanced is you find a recording of Janacek's Sinfonietta and listen to it during the time you read this novel.

I started out loving this book, a fascinating tennis game between two voices. I'm halfway through and I don't think I will finish it; the author repeats many of the details over and over, while he takes many chapters to flesh out the characters; but what is the most disturbing is that his focus becomes on under-age sex (older men with young girls) which makes it very apparent this book is written from a male perspective, so that the voices of the female heroines lose credibility for me.

“If you can love someone with your whole heart, even one person, then there's salvation in life. Even if you can't get together with that person.”

... And a flash of lightning lit up this truth for me, right in front of my eyes. that night I lost you, I also lost something inside me. Or perhaps several things. Something central to my existence, the very support for who I am as a person... It was no longer the blazing anger I used to have It had transformed into something more like a faintly colored sorrow..." "I can't feel the pure, intense anger I used to have anymore ..." "It hasn't completely disappeared, but like you said, it has withdrawn to someplace far away. For years this anger has occupied a large part of me. It's been what has driven me." "Like a merciless coachman who never rests ..." p934-5

Either I'm funny or the world's funny. I don't know which. The bottle and the lid don't fit. It could be the bottle's fault or the lid's fault. In either case there's no denying that the fit is bad pg 111.

People need things like that to go on living-mental landscapes that have meaning for them, even if hey can't explain them in words. Part of why we live is to come up with explanations for these things. Pg 516

It is not that the meaning cannot be explained, but there are certain meanings that are lost forever the moment they are explained in words. Pg 466

You can't generalize about pain. Each kind of pain has its own characteristics. To rephrase Tolstoy's famous line, all happiness is alike, but each pain is painful in its own way.

"The most important thing is to maintain balance between the constantly moving good and evil. If you lean too much in either direction, it becomes difficult to maintain actual morals."

True, rewriting the past probably had almost no meaning, Tengo felt. His older girlfriend had been right about that. No matter how passionately or minutely he might attempt to rewrite the past, the general circumstances in which he found himself would remain generally unchanged. Time had the power to cancel all changes wrought by human artifice, overwriting all new revisions with further revisions, returning the flow to its original course. A few minor facts might be changed, but Tengo would still be Tengo.

What Tengo would have to do, it seemed was take a hard look at the past while standing at the crossroads of the present. Then he could create a future, as though he were rewriting the past. (Part II, p. 364)

sonu_n thinks this title is suitable for 21 years and over

Last_Nights_Readings thinks this title is suitable for 16 years and over

bruce3miller thinks this title is suitable for 18 years and over

RTaurus thinks this title is suitable for 16 years and over

mcla85 thinks this title is suitable for All Ages

cheesebread thinks this title is suitable for 14 years and over

Star-crossed lovers and their search for each other in the midst of getting tangled up with murders and cults in a new fantasy world.