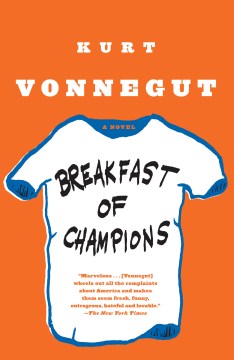 Delightfully off-kilter. A collection of bitingly satirical social commentary thoughts loosely strung together with a plot that is intentionally splintered. Crude and sad and insightful.

"I think I am trying to make my head as empty as it was when I was born onto this damaged planet fifty years ago.

"So this book is a sidewalk strewn with junk, trash which I throw over my shoulders as I travel."

That junk just happens to be highly relevant to current circumstances, nearly 50 years after first written. We need to continue the efforts to empty our heads.

Kilgore Trout is the poster child for the disillusioned man; a spokesperson for the mid-life crisis set. Vonnegut uses him effectively to skewer everything we believed in as idealistic youths. Patriotism, the American Dream, Sex, Love, Money and dozens of sacred cows fall before his satirical pen. Warning: Don't read this until you're 40 (maybe not even then) or it will ruin life's punch-line.

I'm in awe at the way Kurt Vonnegut can be so savage and dark when it comes to our society while also showing love and kindness when it comes to individual people, even (especially) the ones leading messy, complicated lives. I'm also in awe of how he can be extremely juvenile in his humor while being sophisticated (but not pretentious) in using metafiction. This book is absolutely scathing while also being an invigorating breath of fresh air.

Vonnegut is a genius!

As a fan of Hitchhiker's Guide to the Galaxy and similar books, I absolutely loved Vonnegut's style of writing. A simple plot, with millions of funny, quirky, and interesting facts and opinions of the world around us stuffed in. I could not put down this book, and found myself laughing and sharing passages with my family all throughout the book - I would definitely recommend it (especially if you like Douglas Adams)!

One of my favorite Kurt Vonnegut books.

Dark, funny and witty. Loved it!

This is not a genre that I usually enjoy but once I started reading this book I was held enthralled. Unmistakable satire combined with fresh characters keeps the pace lively. The one statement the author made, which I couldn't agree with more though is, "Science fiction writers know nothing about science." Obviously Vonnegut is speaking tongue in cheek here.

A wonderful work; one of the first books that truly engaged me at a young age.

Snarky, hilarious, depressing, and cynical. With an odd story about two quirky, unstable souls, Vonnegut gives an entertaining look at the (still valid in 2013) problems with American culture. I enjoyed it for the heart from which it came.

This book surrounds Kilgore Trout, who is a hermit novelist selling his stories to nudey magazines. Meanwhile Dwayne Hoover is a mentally unstable car salesman living in Midland city. Vonnegut dissects two days down to a novel, as he pieces together, bit by bit, the events leading up to their meeting, and Dwayne Hoover's consequential rampage through a local hotel. His dark humor and aggressive disdain toward censorship creates an air of hubris toward his own species, and the strangeness of their habits, with a chilling satire on our day to day lives, and the mental instability we all have within.

And I think now, as my fiftieth birthday draws near, about the American novelist Thomas Wolfe, who was only thirty-eight years old when he died. He got a lot of help in organizing his novels from Maxwell Perkins, his editor at Charles Scribner's Sons. I have heard that Perkins told him to keep in mind as he wrote, a unifying idea, a hero's search for a father.

It seems to me that really truthful American novels would have the heroes and heroines alike looking for <i>mothers</i> instead. This needn't be embarrassing. It's simply true.

A mother is more useful.