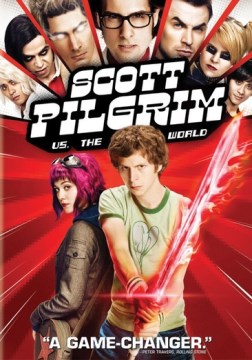 Scott Pilgrim Vs. the World

Struggling to come up with a Halloween costume idea? Maybe you don’t have a big budget or a professional makeup artist to help but these movies might just inspire you! As horror movie aficionados, cosplay enthusiasts, and lovers of all things Halloween, these are some of the greatest costumes Tacoma Public Library has ever seen! Tim Burton's The Nightmare Before Christmas character: Sally… (more)

Cute. Great fun for the young at heart. A Tween Flick.

On the flip side... it's the age old question asked by women world-wide: How do the crazy women keep getting the good men? Scott's dream girl puts the "fun" in dysfunctional. Enough said. The film is self-explanatory.

Awesome soundtrack! I think they did a great job in keeping with the story line.

With videogame-inspired imagery, this romantic comedy martial arts rock opera is a cult classic in the making. Michael Cera achieves his apotheosis as slacker Scott Pilgrim, and the rest of the cast is great too. One of my top five favorite films!

Edgar Wright is one of, if not the best, directors of all time. That being said, Scott Pilgrim Vs. the World is my favourite movie, not only of his but in general. As a comedy, it’s very refreshing. Michael Cera does an excellent job of portraying an awkward 20-year-old and helps bring the whole movie together. The sound design, the rest of the quirky and vivid cast, and the fast-paced editing all blend together to form a fantastic commentary about today's youth and their battles on the relationship front. From an artistic standpoint, the movie is very contemporary. A lot of the editing and the plot itself are both extremely different from typical modern movies. It’s definitely a movie worth watching if you’re looking for something unique and underappreciated by the world of film. 5/5 -@Makani of the Hamilton Public Library's Teen Review Board

Directed by Edgar Wright, Scott Pilgrim V.s. The World is an absolutely amazing movie! It's very true to the original comics created by Bryan Lee O'Malley. Scott Pilgrim V.S. The World was both action packed and hilarious. Michael Cera is a perfect actor for Scott Pilgrim. This movie has also been filmed locally, right in Toronto! It’s very entertaining, hilarious, unique, and memorable. It also has pretty amazing music as well. I personally think this is one of the best movies ever made. It’s definitely one of those movies that you could watch a billion times, and still enjoy it! I would definitely recommend this movie. I give this movie a definite 5/5! @Gummibee11 of the Teen Review Board at the Hamilton Public Library

Scott Pilgrim is a great movie that combines hilarious drama with flashy video-game-like effects and animation into something that is just plain fun to watch, regardless of age. The protagonist is such an absolute dweeb, that his consistent awkwardness makes the movie incredibly entertaining, and the love triangle actually works too.
And the fight scenes, oh my goodness, the fight scenes. Not only is there flow, but the video-game-like effects make it feel like it was based off of a really good anime.
Overall, this is probably the most hilariously campy, yet legitimately incredible movie I have seen. I give it a 5 out of 5 and recommend it to all ages.
- @RhythmDragon of the Teen Review Board of the Hamilton Public Library

A film with a fairly avant garde approach, and I am sure gamers and the young crowd would enjoy it greatly. Unfortunately I am neither, so didn't get much out of it.

Fans of the graphic novels will be overjoyed at this adaptation. If you're not into the comic "feel" of geek culture this will probably be an incredibly bizarre watch. The soundtrack nails the vibe and the actors are a perfect match for their counterparts.

We are Sex Bob-Omb! And we're here to watch Scott Pilgrim kick your teeth in! One-two-three-four!

(For the sake of space). "Matthew Patel's song".-Hilarious and strangely catchy Lol xD

Knives Chau: I've never even kissed a guy before.
Scott Pilgrim: Hey... me neither.

Knives: "So what do you play?" (meaning instruments)
Young Neil: "Oh, I play Zelda and Tetris..."

'Did you really see a future with this girl?'

Mangadude thinks this title is suitable for 1 years and under

RobertELPL thinks this title is suitable for 13 years and over

VV12 thinks this title is suitable for 13 years and over

gamerboy635 thinks this title is suitable for All Ages

JUICY4321 thinks this title is suitable for All Ages

ray1man thinks this title is suitable for 19 years and over

jgrnlees thinks this title is suitable for 13 years and over

bdls206 thinks this title is suitable for 13 years and over

Violence: Lots of fights but all with comic book and/or video game effects.

Coarse Language: Most of the swearing is in "bleeps" with black rectangles over the speaker's mouth. There is, however, plenty of "normal" swearing in the bonus features.

Scott Pilgrim plays in a band which aspires to success. He dates Knives Chau, a high-school girl five years younger, and he hasn't recovered from being dumped by his former girlfriend, now a success with her own band. When Scott falls for Ramona Flowers, he has trouble breaking up with Knives and tries to romance Ramona. As if juggling two women wasn't enough, Ramona comes with baggage: seven ex-lovers, with each of whom Scott must do battle to the death in order to win Ramona.