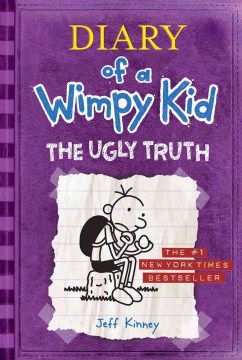 Diary of A Wimpy Kid

While trying to find a new best friend after feuding with Rowley, middle-school slacker Greg Heffley is warned by older family members that adolescence is a time to act more responsibly and to think seriously about his future.
Publisher: New York : Amulet Books, 2010
ISBN: 9780810984912
0810984911

I love this series of books. They're all sooooooooooooo funny!👍

These books are so great!!

Sooooooooo funny!!! U have 2 read this book! One of my fav books ever:)

This is a very funny book about Greg Heffley. He is a humorus person who always gets into some trouble or problem. This is a great book for all readers!

This book is awesome! I bet it will make you fall of your couch.

CarlSun8684 thinks this title is suitable for 99 years and over

PokemonNerd thinks this title is suitable for 8 years and over

violet_seastar_9 thinks this title is suitable for All Ages

blue_dog_17079 thinks this title is suitable for All Ages

MADKC4Ever thinks this title is suitable for All Ages

orange_buzzard_64 thinks this title is suitable for 10 years and over

“For the record, I think it should be illegal for a boy to have to fold his mother's underwear.”

" Greg Heffeley has always been in a hurry to grow up. But is getting older really all it's cracked up to be" (page 173)

“For the record, I think it should be illegal for a boy to have to fold his mother's underwear.”

this book is mad funny and i like it

Greg suddenly finds himself dealing with the pressures of boy-girl parties, increased responsibilities, and even the awkward changes that come with getting older—all without his best friend, Rowley, at his side. Can Greg make it through on his own? Or will he have to face the "ugly truth"?

The Ugly Truth" picks up on the theme that kicked off the series in 2007: Greg's ex-friendship with the portly, innocent Rowley. Rowley, an only child whose parents have coddled him, has spent the summer with a new best friend that his mom and dad hired through a mentor rental service. And Greg, with just a couple days left before school restarts, is considering his options for a substitute friend who could cushion his discomfort at being 52nd most popular in class.

a kid who has a tough life

I have finished a book called, “Diary Of A Wimpy Kid: The Ugly Truth” by Jeff Kinney a realistic-fiction/cartoon book. In this book the central idea or main idea is that Greg is the protagonist in every “Diary Of A Wimpy Kid” books. This book is about Greg going to school coming back home then go on vacation. Things that happens around him. This is his family: one dad, one mom, two brothers, and their names are: Roderick oldest brother, Greg second oldest, then Manny the youngest out of all of them. Manny breaks their things and when Roderick or Greg goes complain her mom always says oh he just a baby he doesn’t understand. Or when Manny eats their food or candy or whatever it is mom gives them the same excuse whenever Greg goes do anything to Roderick’s stuff then Roderick some how gets him back with out his mom noticing. Greg and his best friend Rowley, they both go to the same school now Rowley has a different friend while Greg is still trying to find a friend that is perfect. Not a kid that is scared of things or shy or crazy or addicted to something, etc. Will Greg and Rowley ever become friends again?

Other: Funny and cool!