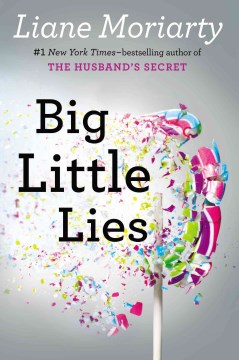 Follows three mothers, each at a crossroads, and their potential involvement in a riot at a school trivia night that leaves one parent dead in what appears to be a tragic accident, but which evidence shows might have been premeditated.
Publisher: New York : G.P. Putnam's Sons, 2014
Edition: First American edition
ISBN: 9780399167065
0399167064
9780425274866

List - A book made into a movie or TV show, as part of the Extreme Reader Challenge

Big Little Lies centers around a group of moms in Monterrey, that all have equally imperfect lives and dramatic secrets. After a school fundraiser trivia night gone wrong, that got a parent killed, readers are given insight into many different characters lives, which slowly starts to piece together the murder. This story is so hooking, and has such an interesting plot with a huge unexpected twist at the end. It is very hard to put down, as it is very captivating and entertaining. This book is definitely a must- read, and I recommend it to friends all the time.

Saw the miniseries a while back and loved it, but I always take a little time between watching adaptations & reading novels. I was saving the audiobook for when I needed a fun, engaging novel that I knew I'd enjoy, and I wasn't disappointed! Liane Moriarty has a knack for writing interesting, vivid, nuanced characters; in her hands, even the most ordinary folks can be vibrant and fascinating. There's some dark subject matter in the book, but there's also a lot of humor and positivity. All in all, I had a great time with this book!

This book had me hooked the whole time! Loved it.

Liane Moriarty's 2014 novel "Big Little Lies" is about secrets in a small town. The story focuses on three friends in Pirriwee - a beach town north of Sydney, Australia.

Single mother Jane arrives in Pirriwee with her 5-year-old son Ziggy. At Ziggy's kindergarten, he is accused of choking one of his female classmates. Rumors about Ziggy continue throughout the school year and some of the Kindergarten parents pressure the school to remove the boy. The Parents take sides in this battle. Two mothers - Madeline and Celeste - befriend Jane and ally themselves with her.

At the novel's beginning, the reader learns that a murder will be committed. This murder is referenced throughout the story, but we must wait until the end to learn who is involved and why.

Moriarty slowly and masterfully peels away layers of her characters to reveal their flaws and the secrets they are hiding.

Madeline is jealous of the affection her daughter Abigail shows to her ex-husband and his new wife Bonnie. Abigail initiates a fundraising campaign that shocks her parents and stepparents.

Celeste is a beautiful woman with two beautiful twins. Her rich, handsome husband Perry is charming and generous; but he flies into a range every few months and beats his wife. Even her closest friends don't suspect the tragedy of her marriage.

And Jane is hiding a dark secret about Ziggy's father.

On one level, the book is a humorous tale of catty, desperate housewives in a suburban community. But Moriarty takes it far beyond that. It is a story of strong women trying to survive against real problems. It is filled with victim blaming, including self-blame by the victims themselves. It shines a light on spousal abuse, bullying, sexual assault, and gossip.

I enjoyed it to the end.

Big Little Lies by Liane Moriarty follows the lives and drama of five moms and their families in a seemingly perfect suburban town. First, there’s Madeline: passionate, witty, and truly a force to be reckoned with and her best friend Celeste: beautiful, smart, and outwardly perfect. Now enter Jane, new to town hoping for a fresh start from a tumultuous past. Alongside fellow mothers Renata and Bonnie, these women have tons of history, grudges, and secrets. However, the death of a loved one shakes up the whole town and exposes the lies that were once so well hidden.
Big Little Lies is honestly one of those guilty pleasure books you read because it is so incredibly soapy, melodramatic, and impossible to put down. Moriarty structures the novel so that it starts with a scene of the big event (the death of a loved one) that occurred then slowly works its way back to reveal all the details surrounding said death. It is this structure that keeps you hooked and always wanting more. I have to admit, the book starts out pretty slow at first but eventually the plot thickens, pace picks up, and you find yourself unable to stop reading. However, alongside all the drama, the novel also tackles many weighty issues such as domestic violence and sexual assault and makes you realize how little you may know about another person’s life and what they are going through. I would definitely recommend Big Little Lies for anyone looking for a relatively light yet still intriguing and enjoyable read.

Makes me wish I got HBO. The characters are interesting and the plot not predictable-can’t ask for much more in a fun read.

A drama-filled contemporary mystery with heart and dark humour. Set in a small Aussie seaside town, Big Little Lies is all about small town gossip, secrets, friendship, dealing with past hurts, and what goes on behind closed doors. Moriarty writes in a relatable, humorous way, despite dealing with some dark issues such as domestic violence, infidelity and murder. I found this to be an engrossing read with likeable (though flawed) characters, and struggled to put it down once I got started. Recommend the TV Show as well

It started out as a bit of a soap opera of parents whose children are starting kindergarten and I wondered if I could stick to it. But there was the hint of a murder running through it and the author kept hidden who died and why until the very end so I persevered. I was rewarded with the last quarter of the book. I wouldn't let myself watch the TV series until I had read the book so now I've got some binge-watching to do.

This is the first book I have read from this author and I really enjoyed it! The writing was interesting with a touch of humor, at times. The main characters were likable, each woman's story held my interest. A really great book.

The perfect book to curl up with during a storm and just read through. Fast paced and addictive enough to finish in a day for sure (in fact I did!).

The mystery/thriller aspect of this book was very addictive. I didn't guess who had died, how, or why until the very end. Moriarty is a master of slowly revealing small pieces of the bigger puzzle to keep you hooked.

The characters were well developed, relatable, and hilarious. The depiction of the pressures of motherhood, maintaining your own identity outside of "wife" or "mother", and the facade of beauty and happiness rang so true. I loved the interview excerpts, they were hilarious and felt very accurate to what it's like to be a single parent at a boutique school with predominantly stay at home moms.

Aside from being entertaining the book touches on the intricacies of serious topics like domestic abuse, rape, mental health issues, and bullying etc without feeling preachy or over the top. It's clear Moriarty has a much more than surface understanding of these issues and it was refreshing to see them treated as such rather than the black and white view normally portrayed in fiction.

karyn8787 thinks this title is suitable for 15 years and over

LoganLib_LisaH thinks this title is suitable for 15 years and over

A murder ... a tragic accident...or just parents behaving badly? What's indisputable is that someone is dead, but who is responsible?

This novel jumps back and forth between the events leading up to, and following a suspicious death at the Pirriwee Public School parent body trivia night. It focuses on three mothers, each at a crossroad in their lives, whose children attend the same school. Madeline is a woman who remembers everything and forgives no one, is struggling to come to terms with a defiant teenage daughter who prefers to be with her ex-husband and his yogi wife. Celeste is a stunningly beautiful mother of twin mischievous boys is married to a hedge fund husband; to all appearances they are set to be the next king and queen of the parent body. Then there is, new-to-town single mom Jane who has concerns about her son is taken under the wing of Madeline and Celeste. When an incident occurs at school involving Jane’s son, drama inevitably ensues.

Liane Moriarty writes a fast paced and engrossing novel filled with suspense and a splash of witty and humorous dialog, surrounded by a wonderful cast of characters who are both flawed and relatable. Her story showcases the effects of school yard gossip, where appearances can be deceiving and you never really know what someone else is going through or what secrets they are keeping. Sometimes it is the little lies that we tell ourselves that can turn out to be the most lethal.

Despite the size of this book, it will have you reading late until the night.

Jane just wanted "a life that worked." Don't we all!