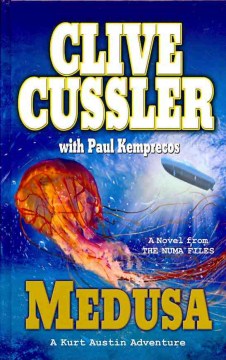 Kurt Austin puts the NUMA team on a case involving a hideous series of medical experiments, an extraordinarily ambitious Chinese criminal organization, and a secret new virus that threatens to set off a worldwide pandemic. In this eighth NUMA File novel, Kurt Austin and his National Underwater and Marine Agency Special Projects team return, squaring off with the elusive and dangerous Pyramid Triad organization of China in a race to acquire the antidote for a bizarre pandemic viral disease. The Triad wants the virus and the cure in order to hold the world hostage; only NUMA stands in the way of its apocalyptic machination.
Publisher: [Waterville, Me.] : Wheeler, c2009
Edition: Large print ed
ISBN: 9781597229456
1597229458

In Medusa, a series of seemingly unrelated events combine into a cold, calculated scheme which will kill millions of people and dangle the fates of nations in the hands of a few Chinese madmen. The story begins in 1848 on the whaling ship, Princess, when the crew falls under a strange illness while sailing the Pacific. The strange potion that cures them is remarkable and most of the men live to a ripe old age, relatively free of disease.

Years later, a strain of the virus which afflicted the men of the Princess, rears its ugly head again. Ruthless experiments on human patients test a cure of sorts, but the virus threatens to leap the bounds of containment and it’s finally time to destroy the evidence - the patients themselves.

A disgraced Chinese physician, Dr. Song Lee, is plucked from the remote countryside and rushed to assist with the research for a cure. Unfortunately, research performed at Bonefish Key is linked to a savage attack on a bathysphere, stranding two men on the bottom of a very cold, dark ocean. Rescue barely comes in time and the researchers struggle to understand how the two events are connected.

Meanwhile, a Chinese criminal group with ties all around the world, disguises itself behind Pyramid, a huge organization with great power and influence. Dr. Lee’s successes in working toward a cure for the virus threaten Pyramid’s plans to allow a worldwide outbreak, with Pyramid holding the only vaccine. As such, Pyramid could name its price for the vaccine, enslaving governments desperate to save their people. Dr. Lee cannot be allowed to continue. A ruthless assassin closes in to silence Dr. Lee once and for all!

Fast paced and frighteningly real, this book is a real page turner. Crisp details of massive submarines, undersea laboratories, government politics and twisted, insane minds are interwoven with the bonds of friendship, technical expertise, love and desperation into a riveting account. From the moment you crack the cover, you won’t want to put this book down. Worthy of a second read, to catch some of the details.

Very good read. exactly the kind of science i am interestested

I am a Clive Cussler fan and have never read a book I did not enjoy from this man and his co-writers including his son.
Definite recommendation for high adventure and suspense.

cpurvis thinks this title is suitable for 16 years and over

In the Micronesian Islands, a top secret, U.S. government–sponsored undersea lab conducting vital biomedical research on a rare jellyfish known as the Blue Medusa suddenly . . . Disappears. At the same time, off Bermuda, a bathysphere is attacked by an underwater vehicle and left helpless a half mile below the surface, its passengers—including Zavala—left to die. Only Kurt Austin's heroic measures save them from a watery grave, but, suspecting a connection, Austin puts the NUMA® team on the case. He has no idea what he's just gotten them all into. A hideous series of medical experiments . . . An extraordinarily ambitious Chinese criminal organization . . . A secret new virus that threatens to set off a worldwide pandemic. Austin and Zavala have been in tight spots before, but this time it's not just their own skins they're trying to save—it's the lives of millions.