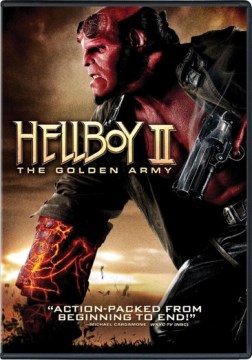 Struggling to come up with a Halloween costume idea? Maybe you don’t have a big budget or a professional makeup artist to help but these movies might just inspire you! As horror movie aficionados, cosplay enthusiasts, and lovers of all things Halloween, these are some of the greatest costumes Tacoma Public Library has ever seen! Tim Burton's The Nightmare Before Christmas character: Sally… (more)

I watched the Hellboy movies in order after watching Shape of Water in theatres. Revisiting the movies, I found they were just as good and cheesy as I remembered them being. True to Hellboy fashion, this second movie plays on the "freaks of nature trying to be normal in a world that hates them" trope better than the original. Hellboy is quirky, dark, humorous, and tackles big issues concerning acceptance and becoming someone you can like instead of needing others to like you.

It was O.K for a home TV movie. I was entertained and interesting. But it was NOT worth the long library wait or the price to rent from a Red Box. "I fast forwarded a lot but not all the way.”

The BASS in this movie is a step up from the first "HellBoy" movie and you'll feel and hear it on your HOMETHEATER. I was impressed by the extra umph!! in this movie sound. Judging this movie on it's own merit without comparring it to the first, i did like it. It was good to see the same main characters back for more adventure. However, i was not feeling this film as much even though the sound was very impressive as well as the visuals. I'm giving this movie 4 stars. A large bag of UTZ onion and garlic potato chips, a large bag of wise barbeque potato chips with dip and coke.

Unfortunately like many sequels this movie did not hold up to its predecessor. It had moments of brilliance and its large budget gave it tons of eye candy, but the screenplay could have been a bit better. It was a good movie, but it could have been great with just a little bit of work. My expectations may have been to high, but I was still entertained.

This is a great follow up, I never know what to expect from sequels but this one was a pleasant surprise. Great acting, great script, and wonderful special effects. I highly recommend this movie to fans of action fantasy type movies.

This is a fun film. Del Toro's delicious imagination provides plenty of odd creatures, though most of them end up in the Troll Market scene and are merely glimpsed.

But, if you want to see a lovable Antichrist punching elves, this is the film for you!

Must See – Hellboy II: The Golden Army (2008). As I was watching this picture, I wondered what they had to do to be recognized by the Academy for Best Special Effects (which it wasn’t nominated for; it did for Make-Up). And then it occurred to me – we’ve been spoiled by these great feats of cinematic magic. The effects were incredible with the CGI creatures and real-life creatures interacting seamlessly. The strength of this sequel (which I preferred over the first) was the dialogue and interaction of the main characters. It’s a mixture of Buffy/Angel and Star Wars. There are some memorable scenes of Hellboy battling this Tree Creature and the inevitable battle with the Golden Army (I’m not giving anything away – the sleeping robots have to come alive at some point). The whit and banter is wonderful. And there’s a great scene with Hellboy and the Fish guy singing a duet (probably the best down to earth scene in the film). Which is why I loved this picture – the world created is a fantasy world but the creators of this film provide some scenes to allow us to connect to the characters and images on the screen. Well done!!! Bring on Hellboy III.

I really liked the first Hellboy when it came out. I thought it was original and funny - in that dark sort of way that makes for good sardonic humour.

What else do you get when you write a script that mocks a freakingly ugly anti-hero going about saving the world - as-an-every-day-matter-of-fact? Have him throwing glib lines around, like there was nothing to it - the business of protecting the universe, I mean - and you've got a refreshingly new screen presence!

Imagine my surprise this time around: Same script-writing collaboration between the originator of the Hellboy comic book character, Mike Magnola, and Guillermo del Toro, who also doubled as director on both flicks... same polished veteran actor Ron Perlman playing the lead role... and the remarkable Selma Blair who's hot not only because she plays Hellboy's love-interest Liz Sherman, a pyrokinetic heroine-freak - plus the same good supporting cast of character actors from the first film.

From its cursed beginning - right to its ridiculous end - Hellboy 2: The Golden Army (a misnomer if ever there was one, considering of how little consequence the Golden Army is in the end!) for me was so obvious and predictable, that I started guessing which other similar genre film it was going to borrow from next to buttress its flimsy plot and "seen-it-before" action!

Tell me you don't see and feel a similarity between Magnola's character Abe Sapien and George Lucas' C-3PO - despite the fact Abe's a merman and Threepio's a protocal droid? And the scenes in the up-to-now only alluded to Troll Market in both Hellboys - that invisible merchant city hidden underneath the Brooklyn Bridge in New York - are obvious rip-offs of Star Wars' pirate city Mos Eisley and the various alien characters of different races that frequented it and its famous Chalmun's Cantina - otherwise known as the "bar scene in Star Wars"!

I could go on... but watch Hellboy 2 yourself if you want an exploratory tug at your movie trivia ability to spot the film-replicants - and pay attention as it remorphs itself from a little bit of this film here and a little bit of that film there... until you get this so unsatisfactory mutant growing that you just want to say: "OK - I've had enough!"

"Next thing you're going to show me is a truly forgettable character dressed as a headless human with a gaseous dome for brains - acting like a quasi-intellectual and speaking with a bossy German accent as if to punctuate the absurdity of the quintessential authority-figure. And for really senseless bad irony... you're going to have him try the impossible: rein-in Ron Pearlman's character. LOL LOL"

Stay for the costume design, make-up of all the absurd characters, some dazzling sets and Perlman's wisecracks, if you must, because the bizarro world of the two script collaborators Magnola and del Toro really will blow you over with its sheer overwhelming fantasy. It is imaginative chaos played out one moment to the tune of Barry Manilow's "Can't LIve Without You" - the next to Mozart's Clarinet Concerto.

But ultimately, you're still stuck with that predictable plot, and the inevitable feeling that comes from wondering - how come the bad guy(s) in this film slice and dice everything in their paths - except this devilish red ugly freak?

Hellboy may be the good 'rock' that pounds evil 'scissors'... but several times I saw the omnipotent 'paper' that covers 'rock' come out in his nemesis, the dark and sinister arch villain Prince Nuada.

Left with that underwhelming predicament to explain away, along with various other plot-twists that made no sense at all - it's no wonder one could be left mortified in the end.

Sorry folks, but I can only give this silly shadow of the original Hellboy - a glancing 1 star.

bdls206 thinks this title is suitable for 13 years and over

lovesanime95 thinks this title is suitable for 13 years and over

The mythical world starts a rebellion against humanity in order to rule the Earth, so Hellboy and his team must save the world from the rebellious creatures.

Hellboy: You're in love. Have a beer.
Abe Sapien: Oh, my body's a temple.
Hellboy: Well, now it's an amusement park.
Abe Sapien: No, no, no. The glandular balance of...
Hellboy: Just shut up and drink it, would you?