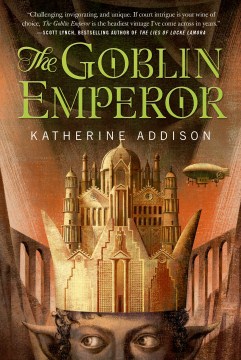 The youngest, half-goblin son of the Emperor has lived his entire life in exile, distant from the Imperial Court and the deadly intrigue that suffuses it. But when his father and three sons in line for the throne are killed in an 'accident,' he has no choice but to take his place as the only surviving rightful heir. Entirely unschooled in the art of court politics, he has no friends, no advisors, and the sure knowledge that whoever assassinated his father and brothers could make an attempt on his life at any moment. Surrounded by sycophants eager to curry favor with the naîve new emperor and overwhelmed by the burdens of his new life, he can trust nobody. Amid the swirl of plots to depose him, offers of arranged marriages, and the specter of the unknown conspirators who lurk in the shadows, he must quickly adjust to life as the Goblin Emperor. All the while, he is alone, and trying to find even a single friend . . . and hoping for the possibility of romance, yet also vigilant against the unseen enemies that threaten him, lest he lose his throne--or his life.
Publisher: New York : Tor, 2014
Edition: First Edition
ISBN: 9780765326997
076532699X

The Goblin Emperor is an adventure – it has so much intrigue and conspiracy that there’s not one, but two coup attempts in its 400-some pages. It also has great characters; Maia (our main character) is the opposite of what I’ve come to expect from main characters in this style of fantasy novel. Mostly, it is because he is so compassionate and good – and because he is so willing to admit that he really does know nothing, and he’s willing to try to fix that. It’s got a whole host of great qualities that make this a worthy read.

For this book to work for you, you need to be able to get on board with the Harry-Potter-esque trope that an adolescent boy without parents, raised by an abusive, hostile courtier (who got this job as a form of exile/punishment) can nevertheless move into a whole new society and learn to function there, using his wits and his empathy to clear the path through a complex, strange environment.

In this case it wasn't that hard to make the leap, and the reward is a delectable torte of a read, through court intrigue, murder mystery, romance, spirituality, social justice and even technology. I wish there was more about Maia's story -- he's really just getting started.

4/5 stars. Very court intrigue-y, but simultaneously heavy on the emotions and struggles of suddenly becoming a Very Important and Powerful Emperor. Great writing, well-developed plot, held my attention so well I read the whole book in 24 hours. Only criticism is that the names were very complicated, especially with every court person also having a title by which they were addressed, which made it a little hard to keep track of the characters. I didn't find the list/explanation of characters until I finished the book, because this book included the list at the end instead of the beginning. Definitely would recommend if you like royalty and conspiracies, with a side order of magic but also technology.

An interesting premise. Dark-skinned and ugly-by-society's-standards 18 year-old raised in isolation and abuse suddenly becomes emperor over the majority light-skinned empire. A key character trait of this young man is that he is always kind, wise, intuitive, self-possessed and deep-thinking, right out of the gate. How did that happen after all his young years of isolation and abuse? The question isn't even raised in the story, so I found suspension of disbelief difficult. And too many names! Complicated, multi-syllabic names at that, some quite similar to others, and each character having at least two! The list of names at the end of the book covers, well, at least six pages single spaced! (I'm guessing there were at least 150 entries!) I'm sorry to say that with the hyper-complexity of all the characters' names, I finally let myself skim to at least get the gist of the story, if not the nuances. I've completed much denser, and much longer tomes than this, which should be a fascinating and fun read, instead of a cross-indexed study.

In a word: fantastic. Absolutely fantastic. Using an extensive cast of characters and all the complexities of interpersonal politics, the Goblin Emperor puts a fantastical spin on the classic bildungsroman, and pulls it off beautifully. The story follows the young half-goblin, Maia, the desired product of a political marriage and therefore out of favor with his Imperial elvish father. For the greater part of his eighteen years, he has known only seclusion and misery, however when a tragic accident claims the lives of his father and his older half-brothers, the unprepared young emperor finds himself thrust to the head of the entire elvish government. By donning the Emperor’s crown, Maia soon finds that he has traded one form of isolation for another, and while his current state seems much more desirable than his previous one, it is also far more dangerous. Beneath his newfound grandeur lurk sinister plots aimed at impeding and undermining his reign, or even do away with him entirely. Bereft of the experience, mentorship, and education usually awarded an imperial son, Maia must rely on the vigilance of his heart to guide him through the haze of petty court politics to those individuals he can trust, discern those he should not, and perhaps discover his true self along the way to becoming The Goblin Emperor.

As a side note, the audiobook is exceptionally done as well. Kyle McCarley does a splendid job matching each character's voice to his or her personality and characteristics. Each one is given distinct intonations and speech patterns that make them easily recognizable without being overly exaggerated or out of place, which is no small feat considering the great number of courtiers, attendants, guards, and the like who make appearances in the work.

This is a fairly long book, but when it ended I found myself wishing for the story to continue. Addison’s first novel is not perfect, though. The characters switch from normal English to old time-y formalities in a way which seems inconsistent to me, and the large number of foreign names were difficult for me to remember. (There’s a list of characters at the back, but of course I didn’t know that until I got to the back.) But the gently-paced story of an unassuming youth unexpectedly catapulted to the highest level of power never lost my interest, and I am looking forward to more from this author. My hope is for more about this character as well.

Great high fantasy read. Had some similarities with the first book in Johansen's "Queen of the Tearling" series.

An aggravating book. This is a first novel written with great energy and the author has an exciting plot. But I found myself constantly noting the flaws even as I was compelled to turn each page. Maia is the half-goblin son of an Elvish emperor. The emperor took Maia’s Goblin mother as his 4th wife in a political move, spent one night with her, and ignored her after. The one night produced this son, but he only met his father once, at the age of 8 when his mother died. Otherwise Maia had a miserable childhood, with only a court outcast, bitter and cruel, to educate him and see to his needs. When he is 18, his father and all of the other heirs are murdered. Maia is suddenly proclaimed as the heir to the throne and is thrust into the politics and subterfuge of court life. Lots of interesting characters and clever intrigue make the story flow well, and you really do empathize with Maia and want him to succeed.

However, nothing shows us why Maia would have the wisdom and kindness to survive court intrigue and to be a kind and empathetic Emperor. It is just the magic hand of the author. A much bigger problem is that the culture portrayed in the book is a random mixture of ideas from other books, collaged together with no coherent history to show how the culture might have evolved that way. And why use the terms “Goblin” and “Elf” when it is apparent that these are more like two races of human?

There are many other amateurish mistakes that a good editor should have helped with. But grumbling all the way, I still read the whole thing in two days. The author has obvious talent and perhaps later books in the series will be more controlled and consistent.

Tired of your typical fantasy battles and back-stabbing court intrigue? Want to see a monarch just show up and do a good job? Need less magic and more logistics of running a kingdom?
Winner winner.

Keep in mind, "goblin" in this context just means a different, slightly darker racial group rather than the pokey little critters fantasy readers might be used to.

the grass in the graveyard had grown so tall that the tops of the gravestones appeared like small, barren islands in a tempestuous and brittle sea

“Nothing can make death easier,” Cala said, “but silence can make it harder.”

“She would not be what she is if she had ever had something given her that was a burden equal to her strength.”

“It was the first time in his life Maia had been surrounded by people who were like him instead of only snow-white elves with their pale eyes, and he missed several names in the effort not to faint or hyperventilate or burst into tears.”

We consider it cruel,' Maia said. 'And we do not think that cruelty is ever just.' ”

“ 'In our inmost and secret heart, which you ask us to bare to you, we wish to banish them as we were banished, to a cold and lonely house, in the charge of a man who hated us. And we wish them trapped there as we were trapped.'

'You consider that unjust, Serenity?'

'We consider it cruel,' Maia said. 'And we do not think that cruelty is ever just.' ”