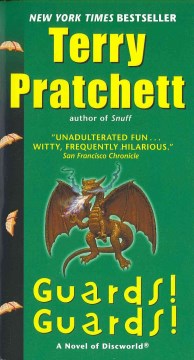 A Novel of Discworld

Here there be dragons ... and the denizens of Ankh-Morpork wish one huge firebreather would return from whence it came. Long believed extinct, a superb specimen of draco nobilis ("noble dragon" for those who don't understand italics) has appeared in Discworld's greatest city. Not only does this unwelcome visitor have a nasty habit of charbroiling everything in its path, in rather short order it is crowned King (it is a noble dragon, after all . . .). Meanwhile, back at Unseen University, an ancient and long-forgotten volume--The Summoning of Dragons--is missing from the Library's shelves. To the rescue come Captain Vimes, Constable Carrot, and the rest of the Night Watch who, along with other brave citizens, risk everything, including a good roasting, to dethrone the flying monarch and restore order to Ankh-Morpork (before it's burned to a crisp).
Publisher: New York : Harper, [2013], c1989
Copyright Date: ©1989
ISBN: 9780062225757
0062225758

Sir Terence David John Pratchett OBE (Order of the British Empire), knighted by the Queen in 2009! He was an amazing British author that published for the first time in 1961 with “The Hades Business”. He went from success to success in his writing career but many feel that his Discworld series of over 44 titles was his Magnus Opus. “OH ME ME” I would not presume to say that the Anglican Church of… (more)

Sir Terence David John Pratchett OBE (Order of the British Empire), knighted by the Queen in 2009! He was an amazing British author that published for the first time in 1961 with “The Hades Business”. He went from success to success in his writing career but many feel that his Discworld series of over 44 titles was his Magnus Opus. “OH ME ME” I would not presume to say that the Anglican… (more)

List - A book with a mental illness, as part of the Extreme Reader Challenge

When I get asked what book in the Discworld series to start with, this is the book I recommend, to be followed up by "Men At Arms". After these two books, if you're not totally hooked on Discworld and Sir Terry's writing style, then this series isn't for you.

My third Discworld book read. Much funnier and much more simple (thank god) than The Colour of Magic and The Light Fantastic. The Night Watch is an excellent group of characters to focus on and Carrot Ironfoundersson is an amusing, interesting character. Captain Vimes is likewise engaging. However, I have come to the sad realization that I cannot get into Terry Pratchett's narrative style, and the stories in Discworld feel too disconnected from reality to land with me. It's too bad, because I do find them quite funny.

Follow Sam Vimes and his ragtag crew as they bumble through police endeavors, investigate shadowy cultists, and confront dragons (some of them very small).

I've had several people recommend that the Discworld books should be read with this book first and I can definitely see why. Based on the standard tale of a lost prince overthrowing a tyrannical ruler and slaying a dragon, Pratchett flips the classic story on its head as the destiny-favored prince joins and single-handedly revitalizes Ankh-Morpork's failing Night Watch guard.

The plot build up was good, full of intrigue and wit, however midway the book loses focus, as if the author doesn’t know who the main character is...and towards the end, it’s rushed like a bus driver who’s just discovered not only is he late, but he’s also driving in the wrong direction. I found the ending disappointing, a weak attempt to transform a Jerry Seinfeld episode into Buddha’s wisdom for the day.

What a delightful book! The writing is so distinctive, and unlike the previous Discworld book I read (Maskarade) this one makes me want to go on and really read more of these books. (Any recommendations on which one 'comes next'- I know there's an 'order' and an "Order," but y'know... help a kid out!) There were a couple moments where I literally laughed out loud, very hard, and I'm always down for that, plus there's always the nice little moments where Pratchett sneaks in some Human Wisdom that are very lovely. I definitely want to spend more time in this world!

Excellent! This is the 1st book with Sam Vimes and it is great! This shows the pitiful beginnings of the Night Watch in Ankh-Morpork, and how they could only get better. Sam starts out as a drunk and hesitant officer of the law. There is an addition to the Night Watch of Carrot - an adopted 6-foot (non) dwarf who is so honest and hard working that you can't help but enjoy everyone else's reaction. This book is a great foundation for the rest of the series. Love it!

As yet another foray into Mr. Pratchett’s Anhk-Morpork, this one deals with the Watch, a system of guards that has been whittled away almost to nothing by Lord Vetinari, that sly, shrewd manipulator of people. Long ago, Vetinari decided that if crime had to exist (and he’d come to the conclusion that it could never be eradicated completely), then it should be regulated by the criminals instead of the cops. That way, the lawmen wouldn’t be forced to work so hard to accomplish so little.

With crime now being taxed and subject to rules and regulations, the criminals do a much more efficient job at policing themselves than the constabulary ever did. The Watch has therefore been reduced to a sinecure, one in which the three men left in it mostly drink themselves stupid, walk idly down the streets, call out the hours, take their sweet time when brawls break out and don’t run too quickly to catch runaway criminals.

So Mr. Pratchett throws a wrench in this flawed but working system. There are malcontents. (Here’s where you get the real humor in this book, with some of the funniest dialogue about a board meeting that you’ll ever read.) There always are grumblers, no matter how well a country is run. They have decided to stage a revolution. There will be a hero, a coronation, a long-lost king (who’ll do as he’s told) and everyone will get what’s coming to him. Oh yes, there’s a dragon.

And this is where things get interesting. Mr. Pratchett’s novel isn’t so much humorous as a satirical lampoon, one that pokes fun at the criminal justice system, the whimsical notions of time and space that humans only imperfectly understand, the notion of insurrection and the very idea of the hero’s quest as commonly laid out in books by Tolkien or Mallory.

There are so many different ideas winding their way through this novel which is one of Mr. Pratchett’s best in the series. There is magic but no wizards. There is a dragon but no lovely maidens for it to eat. There is a hero, but—well, what happens to him is best left for the reader to learn.

Mr. Pratchett proves himself the master of slyness, misdirecting the reader with his version of the shell game. Just when you think you know what’s going to happen—surprise! surprise!

Whether you’re a Pratchett fan or not, this book will show you just what the master was capable of when he was at the top of his game.

My favorite and funniest Discworld book so far! (I've read a dozen of them?)