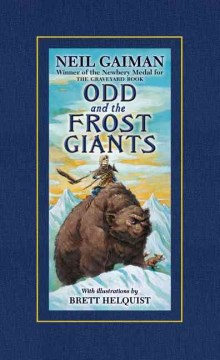 Odd and the Frost Giants

A wonderful romp through the world of the Norse gods and a great way to introduce them to children. I always love Neil Gaiman books and this was no exception. Such fun and is it any surprise that Loki had a hand in the mischief?

the pictures and story is real darn good

An enjoyable folktale for the family, perfectly matched by the voice of the author, Mr. Gaiman. A rare combination.

Wonderful, warm book, great narrating. Somebody wrote simplistic...I wonder what that person created recently...or at all...

This was beautiful and clever and I adored the story.

His voice is so wonderful to listen to. It's mesmerizing, comforting, and wonderous all at once. My kids love him.

With no previous knowledge of Norse mythology, it was fun to get to know the characters in this short story.

A Norse mythology adventure story of a young boy who must outwit the frost giants so spring can return to his land. Great as a read aloud or for beginning and middle grade readers. Fairly short. Also a good audio book read aloud by the author. Not scary like many other of Gaiman's works.

Excellent. Another Gaiman/Riddell fairy or folk tale, great story by Neil Gaiman and wonderful, lavish pen-and-ink drawings by Chris Riddell. A Viking boy leaves home and meets Odin, Thor and Loki enchanted into a bear, an eagle and a fox. They set off together to liberate Asgard from the Frost Giants. After an adventurous journey wherein all four solve problems with their strength, cunning, leadership and intelligence they come to Asgard's woods where Odd goes on alone, the gods having made an oath not to return until the Frost Giants are defeated. Odd's kindness, good spirits and clever dialogue saves the day.

Originally published in 2008 for World Book Day in the UK, this is a newly illustrated edition of Neil Gaiman’s story. This new version imitates the style and design of Chris Riddell and Gaiman’s 2014 collaboration The Sleeper and the Spindle, though Odd and the Frost Giants is a little less opulent. It lacks the semi-translucent slip cover, and the silver highlights used here provide a less striking contrast than the gold used in The Sleeper and the Spindle. However, the silver does give an appropriately cool feel to this wintery tale. Riddell’s highly detailed line art remains consistently excellent.
Full review: https://shayshortt.com/2016/11/08/odd-and-the-frost-giants/

burgundy_dolphin_64 thinks this title is suitable for 7 years and over

jon_k thinks this title is suitable for 5 years and over

When Odd’s father dies while off raiding with the other Vikings, his mother eventually remarries. Feeling unwelcome in their new family, Odd decides to go live in his father’s old woodcutting lodge in the woods, even though it has been an unusually long and cold winter. It is in the woods that he meets a bear, a fox, and an eagle, but these are no ordinary animals. In fact, they claim to be the gods Thor, Loki, and Odin, banished from Asgard by a frost giant. So Odd sets out to help the gods reclaim Asgard, and bring spring back to the human realm of Midgard.