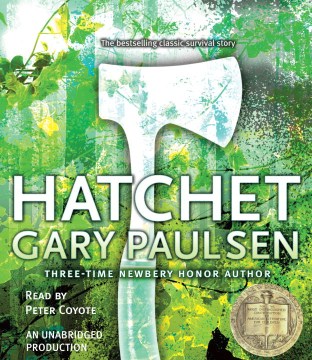 Haunted by his parents' divorce and the secret that caused it, young Brian Robeson, the sole survivor of a plane crash in the Canadian wilderness, must draw on untested skills and strength to survive.
Publisher: [Old Greenwich, CT] : Listening Library, p1992
ISBN: 9780807211557
0807211559

This is one of the best chapter books I've ever read. This book made me want to read on and find out what become of the boy. It was very exciting and adventurous. I enjoyed reading this book.

A tween boy is the only survivor of a plane crash and must survive in the forest until he is found. This novel was utterly compelling on audio and entirely believable. An enjoyable read and I learned some great survival tricks to boot.

Hi! Trying to find a good book for my son fred is such a hassle

This is a survival story about Brian, a 13 year old, who lives after the plane that he was on crashes into the Canadian wilderness. Brian has a hatchet that was given to him by his mother and he uses the hatchet to help him survive.

I love this book. My grade 5 teacher told us that it was a must read book and I totally agree. This is perfect for grades 5 to grade 8 students. I like how all Brian has is his hatchet and makes so much with just that one tool.

Hatchet, a young adult fiction novel by Gary Paulsen was published in September 1987. The story takes place in the Canadian wilderness when 13 year old Brian Robeson is on his way in a small plane to meet his father. The pilot has a heart attack so then Brian has to take the wheel, but he manages to land the plane without hurting himself. He’s stranded and scared. He doesn’t think straight so then he gets into some troubles. Later, Brian thinks about things, ends up finding food and water, and builds himself a fire and a shelter.

The book was interesting and made me crave to read more. I could actually feel Brian’s pains, hunger, and sadness. The pace of this book is pretty fast. The way the author achieves this is to explain in detail about Brian’s day, and then just ends the description to skip to the next week. This book is pretty realistic in some ways and not in others. One way this was realistic was that Brian relied on his sources and ate whatever he could eat, but what was unrealistic about this book was that he survived the plane crash and also that he drove the plane for over an hour by himself as an untrained 13 year old.

This book is recommended to everyone, but personally I think both genders and all ages would enjoy this book. It’s action packed and also has a lot of vivid description that makes me say that this book is good for both genders. I would give this book four stars and recommend it to everyone.

Hatchet is one of the greatest books I have ever read. Perfect for advanced elementary students and middle schoolers. If you love adventure then you will love Hatchet.

Thatguy1612 thinks this title is suitable for 10 years and over

blue_panda_5383 thinks this title is suitable for 9 years and over

anne1212li thinks this title is suitable for 7 years and over

JustinL05 thinks this title is suitable for 10 years and over

2book1 thinks this title is suitable for 8 years and over

In this book, a tween named Brian is on a plane flight to visit his dad. In the plane, the pilot gets a heart attack and Brian is forced to try and fly the plane as long as he can. When he crashes, he gets injured and slowly recovers in the wilderness with only a hatchet. Along the way, he makes new tools that help him in many ways during his treacherous days in the forest. He eventually gets rescued by a man that came looking for him.

After a plane crash in the Canadian wilderness, thirteen year old, Brain must learn to survive the wilderness with the use of his only tool a hatchet.

BRIAN ROBERSONS GET LOST AND HAS NO WAY TO OUT. THEN HE TRIES HIS BEST AND FINALLY SURVIVES.

Brian Robeson is going to his dad's home in Canada but the pilot of the small bush plane he is riding has a heart attack and dies. Brian has to land the plane and survive in the wilderness.

The book that I Have just finished is called, “The Hatchet” by Gary Paulsen a realistic-fiction book. In the book the protagonist is, Brian Robeson a fourteen year old teenager. The setting which most took place was the forest of Northern Canada. Brian is trying to go to Canada by an airplane to see his father during the summer; however, the pilot had a heart attack and died the plane; however, went out of control and Brian and the pilot fell down into a lake in the Northern Canada forest. The protagonist is the obstacles is the things in the forest that is trying to get him dead, for an example: the mosquitoes are keep on biting him and lead poison into his body which could lead him to death. There is a second part to the book which is called, “The River” also by Gary Paulsen and a realistic-fiction book.

Brian Roberson was going to his father's for the summer.But his pilot had a heart attack and the plane crashed.Can Brian survie in the wildness

When the going gets tough, the tough get going.

If he
had
fail
he
shall
try
again
-Robert U

"Food was everything," Thought Brian.