Saved Searches Advanced Search
Returned items may appear on your account for up to a week while they are quarantined. Please disregard any overdue notices about these items. Any fines accrued from this process will be waived. 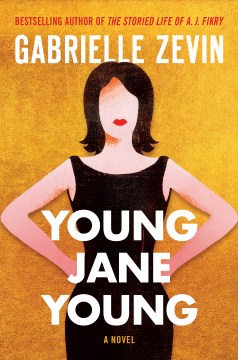 This book embodies what all women have gone through and is very relevant. The author does an excellent job of telling the story from the different perspectives of the characters. I did not want to put this book down and I was rooting for Aviva to find her voice and own her truth.

Normally I hate books that flip flop from different perspectives. This one was different. The author wrote with a sense of humor, but respect for the characters. I really enjoyed it. It was light but not so light that it insulted your intelligence

This book tells the story of Aviva Grossman, who as a young intern, had an affair with the congressman for whom she worked. The affair became somewhat of a scandal, once it was revealed. the congressman, a respectable man in his mid 40s, got out of the affair unscathed. Aviva's future, however, was damaged by the scandal, her reputation forever shattered and tainted.
The story, for the most part, takes place 15 years later (with flashbacks to the past). What I've found interesting about the story, is that its told only through the voices of the women in the story. I enjoyed reading this book so much, that it was actually sad for me to get to the last page.
(

I choose this book because I really loved ‘The Storied Life of A.J. Fikry’. Unfortunately, I found the main character in ‘Young Jane Young’ so annoying, spoiled, and immature which ruined it for me.

This was a well-written, extremely clever book that managed to be both humourous and thought-provoking. I loved how the story was told using several different perspectives. Bonus: the "Choose Your Own Adventure" style of writing was brilliant!

Smart, witty, and wise narrative about the real life ramifications of our culture's addiction to scandal and shaming.

With the almost daily revelations of sexual scandal involving powerful figures in government and business and the rise of the “Me Too” movement, this book is certainly timely. Obviously inspired by the infamous Monica Lewinsky/Bill Clinton affair, YOUNG JANE YOUNG is about the ripple effects of a clandestine relationship between a spellbound intern and the congressman she works for. In the story “Monica” is portrayed not as a sexual temptress, but as a rather naive and insecure young woman, “Aviva,” who is someone’s daughter, an earnest student of politics, and eventually a mother of a young girl herself. Author Gabrielle Zevin manages to insert moments of humor within the storyline while exploring some serious themes: feminism, double standards, choices, owning your mistakes, moving on, reinventing oneself, mother-daughter relationships, and love. The plot shifts from the time of the affair to the present and is told from the differing female perspectives of those most affected by the scandal: Aviva/Jane, her mother - Rachel, her daughter - Ruby, and the congressman’s betrayed wife - Embeth. POV proves to be a powerful storytelling device here. YOUNG JANE YOUNG manages to take a difficult subject and make it a smart, fascinating, and quick read. I recommend it!

A quick read with a deft touch، gently reminding us that there are at least two sides to every story. one thing I hoped would happen did not but it would have changed the whole tone of the narrative. readers of elinor lipman might like this book.

This witty read is deceptively well-written.

I enjoyed a lot of "Young Jane Young" because the writing was fun, the perspectives from each character was well done, but when it was over, I knew this isn't going to be a book I'd ever read again.

Anytime Zevin, author of A Storied Life, writes a new book, I know it’s going to be a page turner. In Young Jane Young readers are introduced to Aviva, her mother Jane and Aviva’s daughter Ruby. Cleverly written in three different sections, including various ages, readers are entertained by Aviva’s, Jane’s and Ruby’s stories. The women deal with life issues, family communication and growing up. Aviva Grossman is a congressional intern in Florida with dreams of working in politics. After an affair with her married (and past family friend) boss, Aviva must move on but how? The congressman doesn’t take the fall. Instead, Aviva does and she has no choice but to change her identity and move to Maine. When she’s urged to run for office, will her past catch up with her? Zevin captures the women’s emotions, ambitions, strengths and the world of politics past and present. Zevin brings us another touching and compelling family story. I have been struggling to get through another book, so this was a fast and easy read, and quite enjoyable. From the author of The Storied Life of AJ Fikry comes this tale of a young intern who gets involved with her married boss, a Congressman. The books is told in differing viewpoints and is quiet thought-provoking, at terms heart warming and funny, and is a great cozy read. Highly recommended as a transitory read from summer to fall.

In the beginning, I was not too sure about this one. A Congressional intern gets swept up in a Monica Lewinsky scandal.
As the book went on, the short chapters and story lines made this a fast read.
Jane's mother was a great character who added much to the story.

I think the author's note sums up the lesson. The main character, Jane's favourite book is One hundred years of Solitude by Gabriel Garcia Marquez. We are born on one day but spend our lives being reborn or reinventing ourselves.

Upbeat message at the end!

Read the Storied Life of A. J. Firky, if you like this one.

This is a story about scandal in the age of the internet and how the bad judgment and mistakes of our youth can follow us forever. I thought the female characters were very well done in this book despite the fact that their actions were not always believable to me. It is written in a frank, straight forward style which is engaging and easy to read. I thought it lost a little steam toward the end but I still think it was a good read.

Enjoyed this book which tells the tale of adultry between a young intern and a sitting congressman (sound familiar?). Well of course it doesn't end well and we follow the story of the young intern whose life is on the internet for all to find. She struggles to find a life for herself after this bad choice is made but finds that it follow her for ever. Interestingly it is only her life that suffers, while the congressman gets away. LIked the characters and the way in which the story is told. Enjoyable story that shows the inequity in our society in the way people are treated no matter what the situation.

Gotta love a book that surrounds us with the repercussions of poor judgement and the possibility of public shaming. The internet rarely leaves us off the hook. I enjoyed how the author told the tale with respect to the authenticity of the person and not the event. The characters were well developed and the story an enjoyable read.

Zevin, the author of The Storied Life of A.J. Fikry, shares the story of Jane Young, formerly Aviva Grossman. As a young Congressional staffer, Jane became involved with Congressman Aaron Levin and keeps a blog. The ensuing scandal results in banishment and misery for Aviva, "Florida's answer to Monica Lewinsky". When Ruby, Jane's daughter, learns about the scandal 15 years later, she takes off for Florida to find her father, the Congressman. Women's roles in modern America are told from four viewpoints -- Rachel (Jane/Aviva's mother), Jane, Ruby (Jane's daughter), and Embeth, the Congressman's wife. This well-written novel moves quickly while scoring lots of points lampooning modern American culture.

I connected most with Aviva's mother Rachel but all the women in this family are wonderful. Zevin writes in such a way that you can see every character's point of view. You understand them. They make sense. You are sharing in their lives. I was surprised by the final outcome.

I loved this story and gobbled it up in one sitting. At first glance, this seems like a guilty pleasure read because it was centered around the repercussions of a political sex scandal. And the novel was witty and engaging, but it was also smart and had deep themes of family, friendship, feminism, and strength. The story is told in five parts, each told by a different woman with a distinct voice. I loved how Zevin experimented with different storytelling devices such as an email exchange with an Indonesian pen pal and a fun ‘Choose your own adventure story’ format. Even though I felt the novel did end at the right moment, I couldn’t help wanting to hear more from each of these fascinating women.