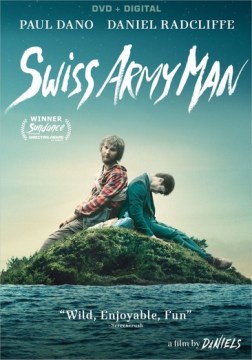 This was one the the most interesting films I have ever seen. I can see why some folks may not have liked it, one needs an open mind to appreciate it. Fabulous for its originality.

Firstly....at any other time this movie would never ever (deservedly so) have been made ....to squander time & money on such a degenerate movie is beyond me.
Secondly....I may need some heavy duty therapy to erase any trace of this deviant movie from my memory - just the thought of it makes me puke in my mouth!!!
Lastly....what really frightens me is the thought that the writers, producers, director, actors & indeed the people here who have given this movie 5 stars - think the story is normal & are walking around without straight jackets on. I pray I never meet any of you scary people!!

I thought this movie was brilliant! My husband and I laughed the whole way through. The humor is quite gross, not for those who are squeamish. This character's struggle is heartbreaking, but it is told with so much humor and compassion. Definitely worth checking out!

I very much enjoy that all the normies are having a hard time with this film. I found it to be hilarious, heartwarming, musical?! and just overall pretty great but yeah, you can't take it very seriously.

I could barely go with interesting. I certainly would not recommend it for children. It is a very peculiar movie to say the least.

I picked this dvd up because it was a STAFF PICK! It makes me wonder about the library staff. The movie started out as an interesting idea but after about 40 minutes it got too gross for me. I can't believe the STAFF got 15 copies of this 'thing.'

This is one of those movies where you wish you could take back the hour and a half (or more) that you just wasted watching it. When it was over, my husband and I looked at each other, and said "What the heck did we just watch?" Yes, some parts of it were funny, but on the whole, the movie was just over-the-top odd.

Original concept, uneven execution. I think this might have worked better as a short film, to be honest, but if you like quirky movies with heart, then this one will interest you.

This is what the "heck" (not the word i want to use but you know what i mean) kind of movies. I was 8 minutes in i just wanted to turn it off. It took me two days to finish because i couldn't sit and watch all of it at once. Some of it wasn't what i expected and i was confused most of the time. in other words this is a movie that doesn't make since at all and i don't know how in the world it made it through production.

Sometimes absurd and sometimes deeply philosophical, Daniel Radcliffe delivers a completely un-Harry-Potter-like performance. This is a very odd movie that is definitely not for everyone, but is 100% original from beginning to end.

Radcliffe is amazing as a corpse, brought back to life by the imagination of Paul Dano, a ship-wrecked man who finds Radcliffe washed up on the beach of his tiny desert island. Radcliffe returns the favor by enabling Dano to leave the island and return home. The police arrive and put Radcliffe into a body bag, which I thought was the right place to end the movie. However, the director preferred to have Dano hi-jack the body and take it down to the beach, where the characters have a sentimental discussion of how people would all be better off if they didn't feel they had to hide stuff from each other. Despite the hokey ending, I give it four stars.

I really found the movie fun but its clearly something that is not for everyone. If you dont like a darker humor or guys talking about masturbating , steer well clear. The movie crazy and not really good at keeping your sensations of disbelief away. Also the ending choices felt like it was going to be good then they sort of spoiled it a bit. That said the movie has its weird emotional moments. So if you can look past its flaws you will fine some nice gems, but if you cant your going to be in for a bad time.

The very last line of the movie is WTF?, and that pretty much sums up this movie. Can't say I didn't watch the whole thing though, but not unlike looking at an atrocious accident on the road as you drive by. Definite points for originality.

A gimmick and some humorous movie. It is somewhat entertaining and watchable.

My husband hated it; I loved it. Quirky black comedy about a man stranded so long he becomes suicidal, who then tries to convince a nearly-dead man that there are reasons for living. Unfortunately the writers are more imaginative than intelligent, but the movie is fun and charming if you can ignore the gaps in rationale.

Awful! total rubbish. I couldn't get past the first 30 mins.

So many things feel wrong about this movie to me. I like the odd strange movie now and then but I found this movie unappealing. A farting corpse was the ONLY thing that made me crack a slight smile. The rest of it, however, was pointless. In other words, this is the type of movie that you will either love (and enjoy the supposed "humour"), or hate it and wish the producers were dead like the corpse in the film.

Swiss Army Man is one of the more original movies from 2016, and it was one I ended up watching out of a morbid curiosity. Daniel Radcliffe plays a farting corpse that can do almost anything--what else is there to it?

Well, a lot. There's plenty of vulnerable moments between Hank (Paul Dano) and Manny (Daniel Radcliffe) as they contemplate finding meaning in life, love, and why we are ashamed of what we do/are. The soundtrack and the editing are the best things in this movie, bar none. The bus recreation scene is very creative and touching.

And of course there's plenty of farting.

It's a peculiar film that doesn't fit in conventional genres, and you need to keep an open mind when watching, but it's a cinematic journey that won't soon be forgotten.

I loved this movie, but not so much the ending. (SPOILER?) I didn't like the switch from fantasy to reality, but then kind of back to half-hearted fantasy. It seemed like the writers didn't know how to end it. I thought they were spot on with everything else.

I also thought this was a deep and intelligent movie, while also being humorous and entertaining. The creativity of the creators via the protagonist was amazing!

What an absolutely dumb and pointless movie. There's nothing between the lines, no underlying depth, nada.
Rewatch Tom Hanks on an island again if you must.

A novel idea with two excellent actors, but the final product is bizarre and confounding. There are many other films to better spend 97 minutes on.

A movie composed almost entirely of exposition. While the acting was excellent, the plot was unbelievable, even as a fairy tale.

One of weirdest movies I've watched in a long time. I'm not sure I'd recommend to everyone I know, but I certainly enjoyed it.