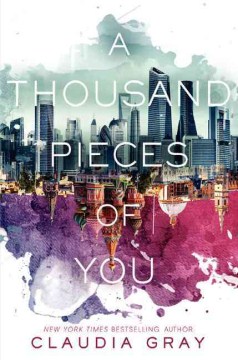 A Thousand Pieces of You

So here's the deal. There is a full blown rape scene in this book that is written off as romantic, and no one seems to care about it. Marguerite, while in control of someone else's body, has sex that results in a pregnancy. She only ever feels minor guilt about this, and the guilt revolves more around "stealing" her first time with Paul rather than the act itself.

The book goes out of its way to seemingly say that it's ok, because the main Marguerite has looked at some of this universes version of Marguerite's art work and that shows how in love she is with Paul. Yeah, that doesn't count as consent. That's fucked up.

This is a really exhilarating journey and it always had me on my toes on where the next dimension would be.

Check out my review of "A Thousand Pieces of You" on my blog at:
http://axarr.blogspot.com/2016/05/review-wednesday-thousand-pieces-of-you.html

There were so many plot twists and turns in this book. Some really hit home and gave me the feeels, but overall it is a fantastic read. It was a great experience and I would definitely recommend it to all readers. ~TE

Claudia Gray’s A Thousand Pieces of You is the first of the Firebird series, and even though this was the second time reading this book, I still found it fascinating.
Marguerite Caine is the daughter of two brilliant physicists who are on the verge of a scientific breakthrough; they built the first device that could allow human consciousness to move through alternate dimensions, and it’s called the Firebird. After Marguerite’s father is murdered and a close friend, Paul Markov, is found guilty of his death, Paul uses the Firebird to jump to other dimensions. But, Marguerite and her friend Theo go after Paul with the Firebirds hanging around their necks, and discover things that could change everything.
I found this storyline to be really unique and interesting and although you shouldn’t judge a book by its cover, I fell in love with the book covers of every Firebird novel.
I would give this book a 4/5 star rating and recommend it to readers ages 13 and up.
- @ilovefood of the Hamilton Public Library's Teen Review Board

Love triangle alert! This book has such a unique way of blending romance and sci-fi. Imagine you could travel to other "dimensions" where you could live out what "you" would live out, in that time period?! This book doesn't cease to disappoint those who may look for time travel or quests, with driven ambitions for causes such as revenge. Marguerite, facing her father's death, wants to find the murderer and avenge him. But what if everything she was told were lies? Readers will long to find the answers with the protagonist herself, and dive into a conspiracy darker than what they ever imagined. 5/5 stars
- @Siri of the Teen Review Board of the Hamilton Public Library

I'm not gonna lie. I picked up this book because the cover is exceptionally beautiful. But the cover isn't the reason I rated this book so well. The story is exciting with never a dull moment. There are plot twists any avid mystery or thriller fan would appreciate. And the romance, while enjoyable, isn't all consuming like some fantastical YA tales. If you check out this title, be sure to check out the next two in the series with it, because you'll be eager to know what happens next.

This book was exciting and enjoyable read. Can't wait to read the 2nd installment of the Firebird collection.

Let me tell you: I fell hard for this book. Amazing world building, a fast-paced plot, and just enough romance to keep you burning through those pages.

WOW! I enjoyed this book a LOT! I couldn't put it down, I read it in 1 night! It was very fun to read and I very much enjoyed reading it. The cover was the real reason I grabbed it though. But I am HAPPY I DID!

At times, the concept of multiple universes can be hard to understand, however the author, Claudia Gray, does a wonderful job explaining its role in the story and how it is affecting the life of the characters. This book offers a new science fiction topic in a young adult genre and keeps you at the edge of your seat as the story develops.

I had NO idea what I was going to be reading when I put this on hold. I'd seen it all over Instagram though, and I have to say, I LOVED it <3

For Doctor Who fans, this is a great read for you. Hopping between time and space, what will really happen if you made a decision differently? A reccomended read for slightly older audiences.

This book combines science fiction with romance and espionage in a captivating package. The central figure of Marguerite Caine lands in one fascinating world after another in search of an elusive killer and an even more elusive truth.

After reading about gullible heroines, I wasn’t so easily convinced about Paul Markov as Marguerite is and the author realizes this. She works to get the readers on her side and I was gradually brought along to Marguerite’s way of thinking.

I’m almost sorry to point out, however, a big plot mistake on Ms. Gray’s part. She makes it clear early in the book that the Firebird—the scientific device that allows people to jump into their counterparts in other dimensions—can be detected by everyone only in the dimension in which it was created. In any other dimension, the Firebird is very difficult for the natives to detect or, rather, hovers beneath anyone else’s level of awareness. However, a mere 60 pages later, someone who isn’t part of the Firebird dimension easily catches sight of it and removes it from the neck of a key player. Oops!

This isn’t a small mistake. The removal of the device causes one character’s consciousness to disappear and the host personality to reassert itself. It is this personality with which Marguerite interacts, causing a moral and emotional dilemma for her. This error is a major flaw; for Ms. Gray to fix it would mean rewriting a large part of the novel.

I wish I could overlook it because otherwise this is one riveting action-adventure, science fiction novel, worthy of its inevitable sequels. Perhaps it’s something that most people can ignore by pointing out the device is ALMOST difficult to detect but not impossible.

At any rate, this is a corking good read for people who like believable science fiction elements in their YA fiction.

Normally when you commit murder, you get punished for it right away, by being arrested and taken to jail, but in "A thousand pieces of you" it is quite the opposite.

In this book, Paul Markov is believed to commit murder. The perfect murder you could say. Cutting the brakes of a scientist, who has developed the first ever time machine, called the Firebird,that could jump in between dimensions, and then stealing the time machine to jump to another dimension.

The daughter of the scientist, Marguerite, wasn't very happy to hear the news of her father, but when mentions of being able to go after Paul using a prototype of the Firebird, Marguerite is completely thrilled. All Marguerite wants is to kill Paul, which seems impossible, but with the help of Theo, her parents assistant, it might actually be possible. After having Theo alter some of the prototypes, Theo and Marguerite jump through many dimensions, trying to catch Paul.

But when Marguerite learns the truth of her father's death, all tables turn. Turns out that the real enemy isn't who she really thought. Marguerite know who is at fault now and will do anything to stop them at all costs.

Best-selling author Claudia Gray’s newest book is many genres woven into one: a suspenseful mystery, an epic romance, a science-fiction and a time-travel adventure in which 18-year-old Marguerite Caine embarks on a dangerous mission into alternate dimensions to discover and punish her father’s killer.

"Eighteen-year-old Marguerite wants revenge for her father's murder, even if she has to cross dimensions to get it. Her scientist parents invented a device which allows people to jump into parallel dimensions -- and Paul, the suspected killer, used the device to escape. Armed with a prototype, Marguerite and Theo (her parents' assistant) follow Paul's trail. In each dimension, however, they inhabit the bodies of their alternate selves, which leads to confusion, betrayal, and surprising romance. If you love this twisty series opener from the author of Evernight, you might also want to check out Cristin Terrill's All Our Yesterdays." Teen Scene December 2014 newsletter http://www.libraryaware.com/996/NewsletterIssues/ViewIssue/c784f5e0-f60e-4de8-b886-48d6ca19c407?postId=fc06c11e-c513-43b4-9c4c-2c58d7550540